IDF Mission in Surfside: ‘Working on the Pile as If Everybody Is Alive’

Lieutenant Colonel Oz Gino, a battalion commander in the Israel Defense Forces, is a one of the IDF Home Front Command’s 15-member delegation working at the Surfside Collapse.

In a phone interview with Hamodia on Friday afternoon, Gino, who has 15 years’ experience in search-and-rescue operations, discusses his and his team’s work digging through a pile of rubble expected to contain over 120 people, and the race to hopefully find at least some of them alive, eight days after the collapse of the Champlain Towers South Condo building.

Interview is edited for clarity and length.

Can you describe what the work is like down there at the scene?

It’s a very complicated pile. We have 12 floors plus penthouse that collapsed on each other like a pancake, and there is almost no space between the floors, so it’s very difficult to work on the pile. The guys here, and the task forces from the firefighters of Florida are doing a great job.

We’re trying to do anything we can to help them, and to make the search-and-rescue activities precise. We work together shoulder to shoulder, and thank G-d we are improving each and every day on the pile, and we are making really good progress.

You said that you’re making progress on the pile. Can you go a little more into exactly what you mean by that?

We’re working on a story — we are learning the story of the building. Our engineers and the American engineers have a thinking group.

We have three officers from Israel who are expert in learning and asking questions from family members of the missing: where is the bedroom where is the bed, where is the closet, where are the stairs, etc. And if you take this information — and you have good building engineers, who understand how the building collapsed — then you can be precise in the rescue activities, to know where to search, what kind of tools you need to use. And you see the results.

Every day we’re finding more and more — sorry to say this but, but this is the story — we find more and more bodies. And I hope in the next few days, we’ll find more — hopefully alive, but it’s already eight days after the collapse, and it will be very hard to survive this kind of event.

Can you compare this to other rescue operations that you’ve experienced.

The last operation was when Hamas was shooting rockets from the Gaza Strip into Tel Aviv. But you cannot compare these situations. Because when a rocket hits a building, it can result like 10 or 15 meters of damage. Here you have like 50 or 60 meters of damage. It’s huge damage, and the area is bigger than you can believe. And it’s very hard to know exactly where the people are.

In the early days of this operation — before you guys got there — some of the family members were unhappy; they thought that the rescue operation was moving too slowly, and that’s why they requested that you guys come down there. Once you got down there and saw what the Miami-Dade Fire Rescue were doing, what was your assessment of the job they did? Were they doing things appropriately, or was it inadequate?

Actually the guys did a great job. We are holding with them thinking groups about the pile.

I’ve never seen this kind of manpower and logistics and forces. You have here everything. You have all of the states. This is how it looked like to us when we came from Israel. They have done a great job. I think that in the early days, when they were alone, the job was very tough, because there were fires, and a lot of things that once we came, we didn’t have to deal with. They did a great job, the firefighters of Miami, and you have from Indiana and other states also. The guys don’t go to sleep. They’re working on their knees and go inside spaces. They really fight to save lives. I really mean it, I really feel that.

It’s not about anything I heard in the media; it’s about what I have seen with my eyes. And I really learned a lot from the forces here, a lot of mental lessons, and a lot from their commitment to the pile, and for the people inside it.

So you think that any assertions early on that the rescue officials were not doing enough, are incorrect?

Are you guys doing any of the trauma counseling for the families?

We have here a few officers who deal with the families. They are sitting together, they ask them questions. And, of course, every day we have a colonel from the IDF tell them what we did and what we are going to do. We are with all of the families in the same hotel, and we really think that the connection to the families completes the process. It’s direct: from the family to the pile. If you are doing this kind of work on the pile, with rain, with fire, with weather, with toxic gas — if you’re not involved emotionally with the families, you cannot do this.

In the last 48 hours, we have slept four or five hours — and we are good with that, because we see this kind of mission as more important than anything. We have left our families at home. I haven’t seen my wife and kid for three weeks because I was away in the army and then went straight to the airport to Florida. We are here for our allies, our families, and we will do anything we can, with the American forces, to bring the missing people back to their families. We are doing whatever we can, around the clock, 24/7.

Did the elected officials and rescue officials in Florida welcome you? Or were they in any way insulted that outside help was coming in?

They welcomed us. We are in the teams of the American Task Force rescuers. We know all their names, they know our names, we know the families; in just these few days we have become a kind of small family. They give us anything we need; they take care of us. We are working together. There are no problems. We are serving the same goal.

There are 15 of you there from the IDF Home Front Command. Give us a sense of the work breakdown: how many of the 15 are down there at the scene at one time, and how long are the shifts.

We have three engineers, and three officers that deal with the families. Another nine guys do search-and-rescue on the pile, split into two groups — one is four guys and one is five guys — and each group does a 12-hour shift. We’re working with the Americans every day. And we’re doing everything to get the victims out.

Yesterday there were concerns that the standing portion of the building was unsafe, and the rescue operation was paused, before later resuming. What do you feel about the stability of the structure there, and the safety of the rescuers?

We are gauging it every day. The Americans have experts who have sensors on the building. We need to take care of the guys working on the pile. Yesterday, a sensor picked up what sounded like the building was moving a little bit or something. So they took all the Fire Rescue officials and our delegation off the pile. They did an assessment, as they do every day, to ensure continuation of the work as well as the safety of the rescuers. After the engineers’ assessment, they gave clearance to continue the work.

It’s a risk, but you know the guys here are so into it, and motivated to do the best possible job and to complete the mission.

Finally, and most importantly: It’s already more than eight days since the collapse. Is there any chance of finding survivors?

There is always a chance. It rained a few times; the water can get into the floors, and people can drink from this. We saw this in Turkey in ‘99 with our delegation there on the search and rescue after the earthquake. And we saw in Haiti a few stories like this. We are working on the pile as if everybody is alive. We are motivated, we have the power. We aren’t interested in sleeping or anything. We are just looking just to get the people out of the pile. It doesn’t matter how long it takes, and doesn’t matter how much power we have to use. We’ll do anything to get it. That is our mission. That is our goal. 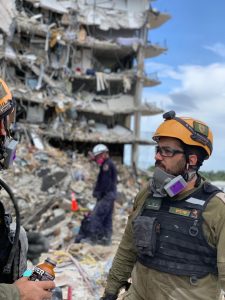 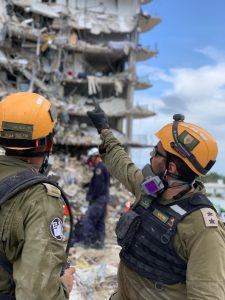 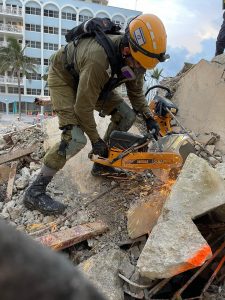 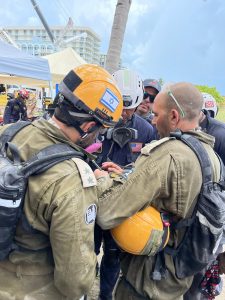 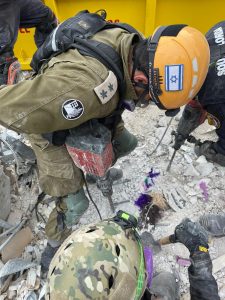 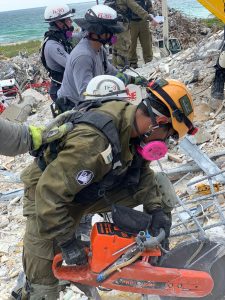