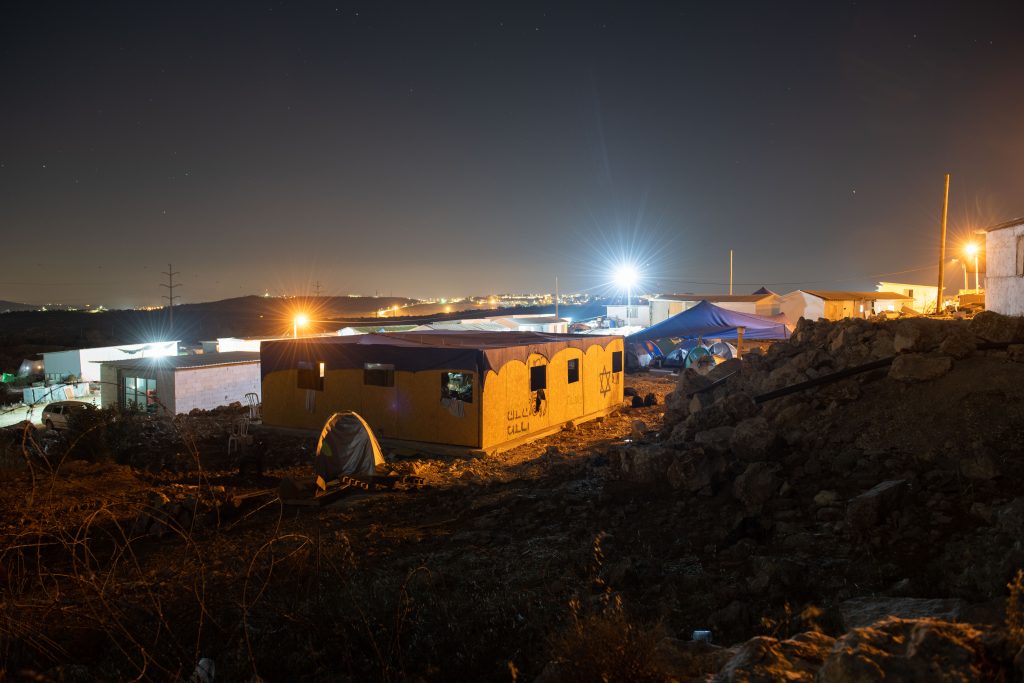 Residents of the Evyatar outpost gave final approval early Wednesday morning to a deal with the government that will see them move off the before the end of the week, but leave some of the settlement intact.

The agreement came hours after questions arose regarding settler claims about a compromise agreed to a day earlier between the dozens of families living at the site and the government.

According to settler leaders, under the new deal, a Hesder yeshivah will only be established at the site in several months, and not on Aug. 9, as the earlier deal detailed by the outpost’s leadership had stipulated.

However, they said the deal will also require the Defense Ministry to complete a survey of the land within six months, with an eye to permitting settlement building on parts of the tract not found to encroach on Palestinian plots.

The settlers’ approval of the final deal was announced by the Shomron Regional Council just after midnight on Wednesday morning. There was no immediate confirmation from the Defense Ministry’s Civil Administration, which manages Israeli and Palestinian civilian affairs in Area C of Yehudah and Shomron.

It came after what Army Radio described as a stormy meeting that lasted into the night, with some opposing the agreement that will see them leave their homes by the end of the week, with no guarantee that they will be allowed to return.

The Shomron Regional Council said that under the deal, Evyatar’s residents will leave but its structures won’t be demolished, with the IDF instead immediately transforming the outpost into a makeshift army base.

Shomron Regional Council head Yossi Dagan defended the agreement as necessary given societal rifts. “Any step toward the other side is for the unity of the people of Israel during these tough times of divisions,” he said in a statement early Wednesday.

Religious Zionism MK Orit Struck dismissed Dagan’s reasoning as a “shameful” excuse and said the “retreat from and erosion of the agreement” was “worrying.”

After the deal was approved, it was criticized Wednesday by politicians from both right and left.

MK Mossi Raz of Meretz said that if the deal was final, it was “very grave.”

“This is simply insanity, letting terrorist criminals decide where an army base will be formed,” Raz told Radio 103FM. “These are family members of criminals who stole land, they are truly terrorists. I prefer the outpost to remain as is rather than this fraud that is being called a compromise — this isn’t a compromise, this is capitulation.”

Raz said that the deal reached shows the new government is further to the right than its predecessor, and warned that the Meretz faction could bolt if the coalition continues on this path.

“This government will split apart if it continues like this,” said Raz. “We spend every night in the Knesset working to pass all kinds of laws in the government which make it 20 degrees more right-wing than the previous government.

“I can’t understand that this is the final deal,” Raz continued. “If it is, this is really serious. Bennett promised a government that is [just] 10 degrees more right-wing than its predecessor. This is simply insane. You’re enabling criminals and terrorists, letting them decide where an army base will be established.”