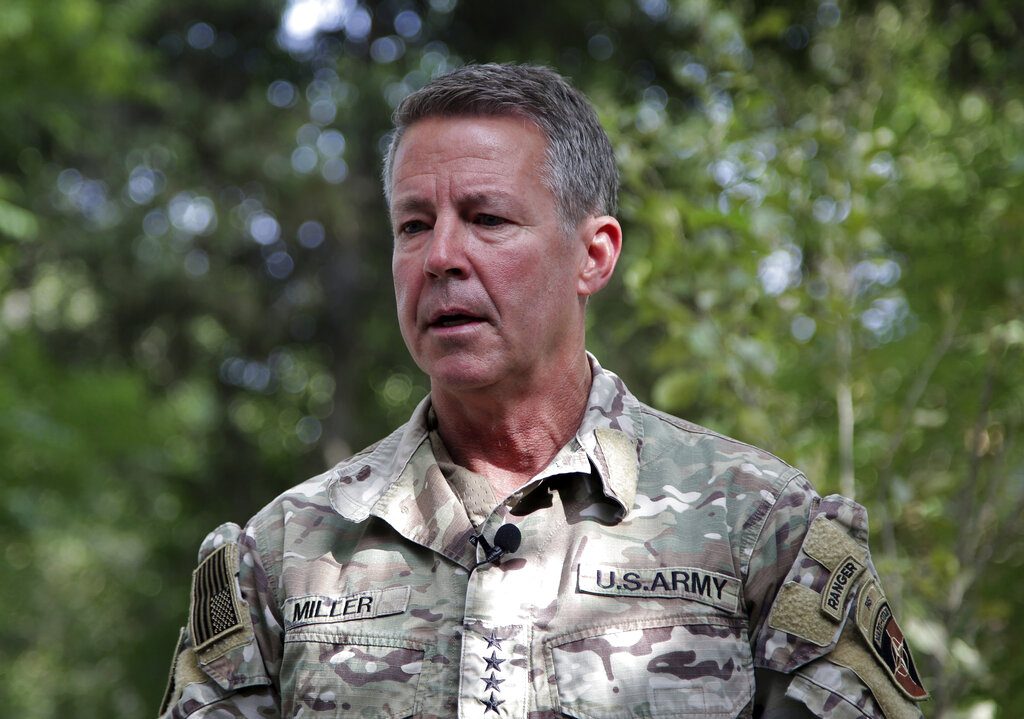 The U.S.’s top general in Afghanistan on Tuesday gave a sobering assessment of the country’s deteriorating security situation as America winds down its so-called “forever war.”

Gen. Austin S. Miller said the rapid loss of districts around the country to the Taliban — several with significant strategic value — is worrisome. He also cautioned that the militias deployed to help the beleaguered national security forces could lead the country into civil war.

Miller told a small group of reporters in the Afghan capital that for now he has the weapons and the capability to aid Afghanistan’s National Defense and Security Forces.

But he said only a political solution will bring peace to the war-tortured nation.

“It is a political settlement that brings peace to Afghanistan. And it’s not just the last 20 years. It’s really the last 42 years,” he said.

Miller was referring to not only the U.S. war but that of Russia’s 10-year occupation that ended in 1989. That conflict was followed by a brutal civil war fought by some of the same Afghan leaders deploying militias against the Taliban. The civil war gave rise to the Taliban who took power in 1996.

American officials have said the entire pullout of U.S. troops will most likely be completely finished by July 4. But Miller refused to give any date or time frame, referring only to the Sept. 11 timeline given by President Joe Biden in April when he announced the final withdrawal of the remaining 2,500-3,500 American troops.

Meanwhile, the Taliban have been over-running districts in rapid succession, many of them in the north of the country, which is dominated by Afghanistan’s minorities. The north is also the traditional stronghold of many former mujahadin leaders that have been a dominant force in Afghanistan since driving the Taliban from power in 2001 together with the U.S.-led coalition.

Several of the districts have been on key roads and one on the border with northern Tajikistan. The Taliban have issued statements saying hundreds of Afghan security forces have surrendered, most of them going to their homes after being videod receiving transportation money from the Taliban.

Miller said there’s multiple reasons for the collapse of districts, some the fatigue of the troops and their surrender, psychological defeat and military loss. But he said escalating violence risks the country falling into a deadly civil war.

“As we start talking about how does this all end? The way it must end for the Afghan people is something that revolves around a political solution,” said Miller. “I’ve also said that if you don’t reduce the violence, that political solution becomes more and more difficult.”

He refused to say where the U.S. and its NATO allies were in the withdrawal process.

Miller said his time as the head of the U.S.’s military mission in Afghanistan was coming to an end, without giving a date.

He wouldn’t speculate on the legacy of America’s longest war, saying it will be for history to decide.