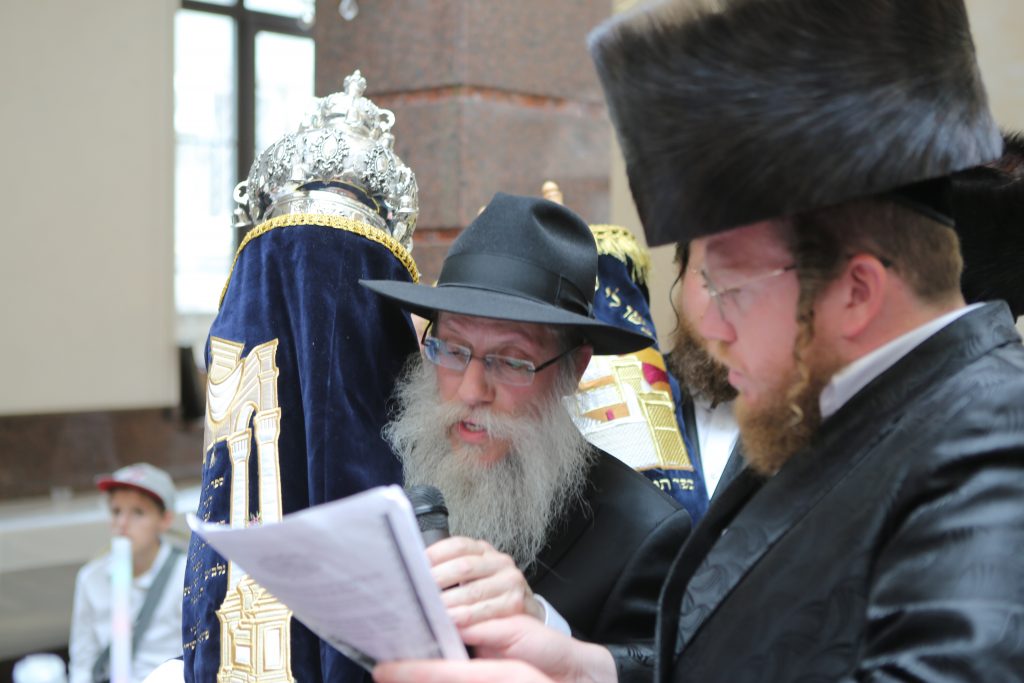 It was a festive day in downtown Zhitomir in Western Ukraine as large crowds joyfully participated in a hachnasas sefer Torah, bringing a new sefer Torah into Zhitomir’s large synagogue for the first time in a hundred years.

Many guests arrived to partake in the grand celebration. Amongst them were shluchim, city Rabbanim from throughout Western Ukraine, friends, family and supporters from Israel and Europe, all singing and dancing with the local Jewish community and students of the educational institutions and Alumim Children’s Home. The event began at the old synagogue in the Ohr Avner Educational campus, and continued as a joyful procession honoring the Torah all the way to Zhitomir’s beautiful shul, which was just recently renovated on its original grounds – to the joy of the local Jews.

In his remarks, the Rabbi and shliach to Western Ukraine and Zhitomir, Rabbi Shlomo Wilhelm, said, “When we first arrived in Zhitomir after the fall of communism as emissaries of the Lubavitcher Rebbe, we did everything we could in order to revive Yiddishkeit in this beautiful community. We discovered many old Torah scrolls, most of which were over 150 years old, and we tried our best to fix them up and make them kosher so that they can be used in our community, as well as the surrounding communities. But as time passed, these Torah scrolls became rarer and rarer to find. Thanks to our esteemed donors, Rabbi Shainbelg of London and Rabbi Gotfryd of the Holy Land, we merited to celebrate the dedication of this mehudar Torah scroll.”

The final letters in the scroll were written by the Boyaner Rebbe, teacher and spiritual mentor to the late philanthropist Reb Shmuel Gotfryd. The Boyaner Rebbe sent his special blessings to the children of the Gotfryd family, who traveled especially to Ukraine in order to participate in this great celebration, along with many friends and supporters, including Rabbi Meir Fishman of Yerushalayim. They expressed their gratitude before the executive director of the Ohr Avner village, Rabbi Avraham Baruch Deutch, who worked tirelessly to organize this event in honor of the Torah and of Rabbi Gotfryd, z”l.