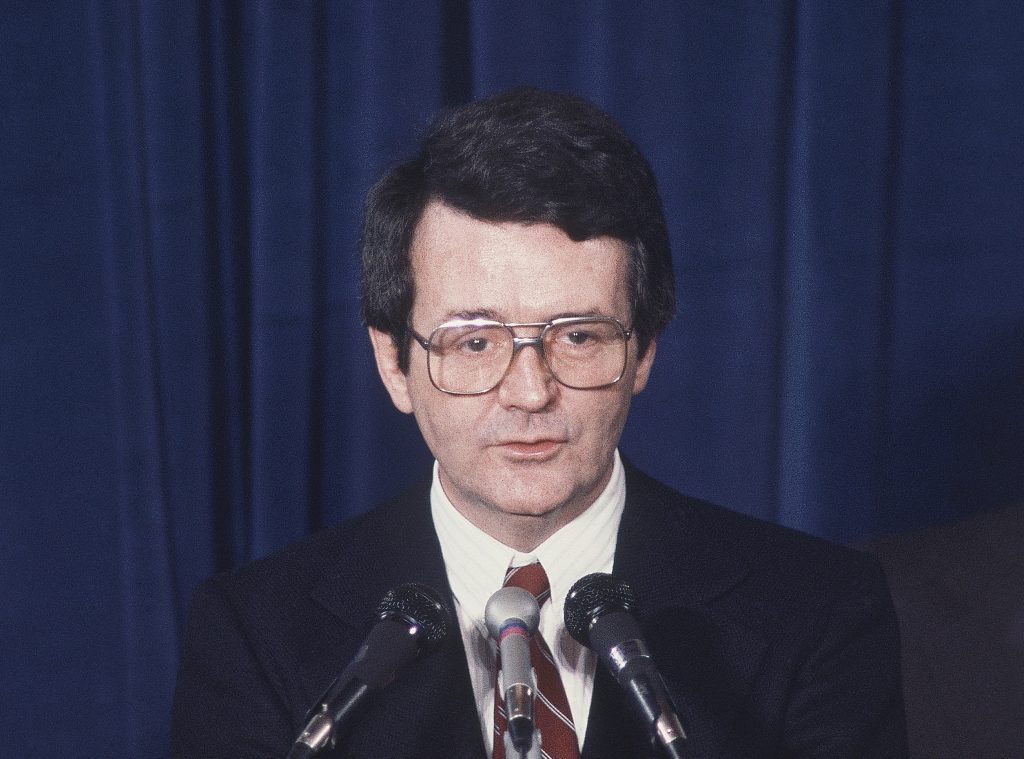 Raymond Donovan died this week at age of 90. Few people remember the name, but many more do remember something he once said.

Donovan resigned as Secretary of the Treasury in the Reagan administration after being indicted on corruption charges, for which he was subsequently acquitted, after the jury determined in just a few hours that the prosecution had no case.

All the obituary pieces quoted Donavan’s famous line: “Which office do I go to to get my reputation back?”

For years after his innocence was established in a court of law, the stigma of having been an indicted pursued him. A Time magazine article described how, in 1984, “Donovan drove to the public library near his home in Short Hills, N.J., to read the newspaper clips about his career. As he thumbed through the stories about his legal troubles, he grew increasingly angry.

“That’s what people will read forever,” Donovan complained. It may be small comfort to him, but now that folder will contain a sheaf of clips headlined DONOVAN ACQUITTED.”

Essentially, the case against him was that Schiavone Construction Co., a Secaucus, N.J., firm in which Donovan served as executive vice president before his Cabinet appointment, had defrauded the New York City Transit Authority of $7.4 million on a contract to construct a subway tunnel.

Merola charged that Schiavone had used a front called Jo-Pel to siphon cash out of the contract through leasing and rental fees. The defendants maintained that Jo-Pel was a legitimate firm, the leasing deal had been proper and, since the construction job had been finished for less than the contract price ($186 million), the Transit Authority had lost nothing.

Not only were Donovan and seven co-defendants found not guilty, but the prosecutors came under scathing criticism for presenting a flimsy case and doing a bad job of it at that.

Columbia University Law Professor Gerard Lynch said at the time: “The general feeling is that this is one of the dullest, longest and least persuasive presentations ever made.” Joy Fennel, a juror who said she had initially leaned toward conviction, agreed: “I was frustrated the D.A. didn’t do a better job.”

How could Bronx District Attorney Mario Merola have brought such a flimsy case? The defense contention that Merola, a Democrat, brought the charges just before the 1984 election in a politically motivated attempt to embarrass the Reagan Administration was never substantiated.

Merola rejected the criticisms, asserting that the problem was not lack of evidence, but unfeasible evidentiary standards. As he put it, “In the Bronx, you need a smoking gun or a knife to convince a jury a crime has been committed.”

This can make a matched set next to Donovan’s line, quoted by The Washington Post shortly before his indictment: “If you’re in the construction business in this country, you’re suspect. If you’re from New Jersey, you’re indictable. And if you’re Italian, you’re convicted.”

It’s not unlikely, though, that even if there had been a smoking gun, Merola’s team would have bungled it. During the indictment process, Merola was lectured by the presiding judge on the proper method of indictment: Merola wanted to argue the case on two theories of what the jurors could consider as larceny; the judge instructed him that they could consider only one.

As a retired Manhattan judge who followed the trial noted: “It is pretty embarrassing for the prosecutor to have the judge straighten out for him the indictment and the legal theory behind it.”

Decades later, Donovan’s anguished, if rhetorical, question still hangs in the air. The fact is, there is no such office that will give a reputation back. There is no complete redress for the damage suffered to one’s reputation; the cloud under which he left office never entirely dissipated.

What could be done about it? Perhaps nothing. Even when the legal process yields a clear verdict of not guilty, it cannot give back all the lost time, the emotional trauma; the wounds may heal, but the scars remain. Not every wrong in this world can be righted.

Donovan was fortunate in that, although he never returned to public service, he was able to return to Schiavone as its president until 2005. Not everyone whose reputation has been so damaged has another career to fall back on. The gap in the resume will always be there, and have to be explained.

The only protection against such injustice is the grand jury system itself, which allows a person to be tried for an offense only after the prosecution has made a persuasive case, in secret, that there is sufficient evidence to proceed. That, and the integrity of the prosecutors, who should weigh the evidence with mindfulness of the consequences, whether the verdict will be guilty or not guilty.

Then the onus shifts to society — and especially the media, which plays such a major role in destroying reputations in the first place — to avoid exacerbating and prolonging the suffering of a person who, it turns out, was wrongly accused.