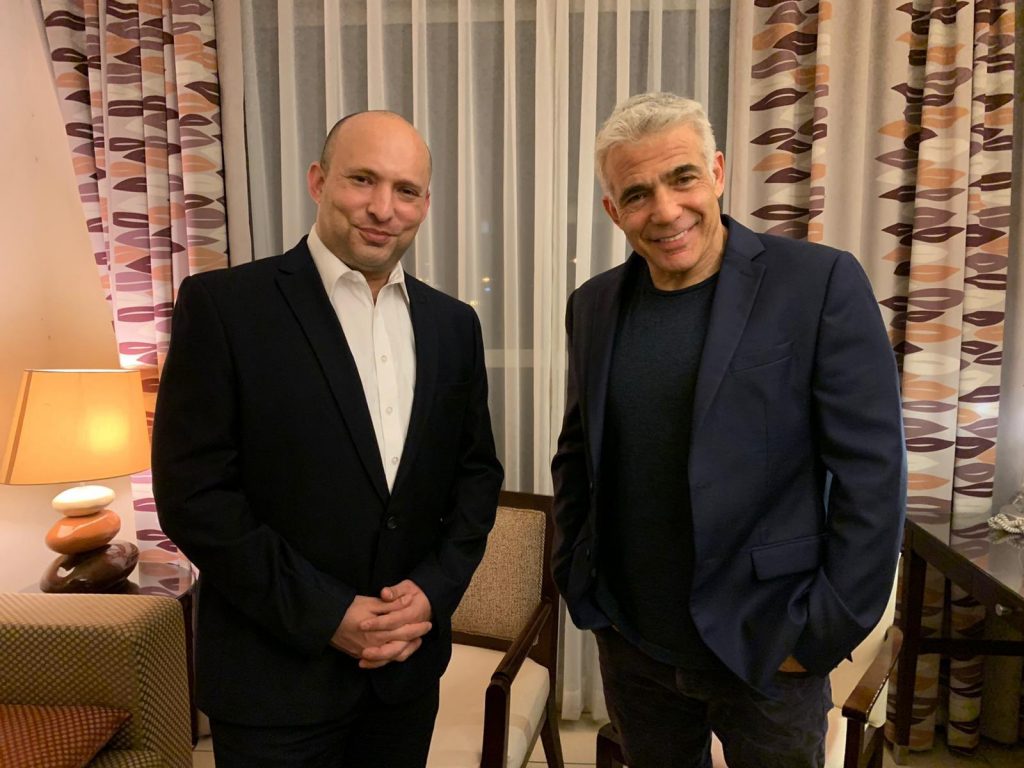 Yair Lapid and his coalition partners succeeded on Wednesday night in doing what they dreamed of doing but failed to do for twelve years—oust Israeli Prime Minister Binyanim Netanyahu from the premiership.

In the culmination of 28 days of negotiation—with an 11-day break for a war with Hamas—one by one, the parties of the new unity government finalized deals and compromises and signed the paper which declares the new government that must be delivered to President Reuven Rivlin by midnight.

A source close to Lapid said that even if some details remain unresolved, he will nevertheless notify Rivlin that they have a government, those details to be wrapped up prior to approval in the Knesset in the coming days. 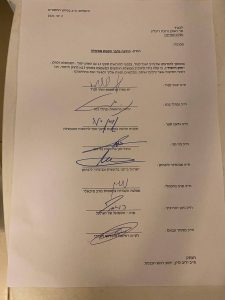 As of 11:09 p.m. Israel time, all the parties had reportedly signed on. But there was still one holdout—Yamina MK Nir Orbach, who reportedly was deciding at the last minute whether to sabotage the whole elaborately constructed plan.

According to Channel 12, Orbach is said to be thinking of casting his vote against the unity government, reducing it from 61 MKs to 60 and dashing all hopes. If, on the other hand, he were resign from the party, Bennett could pick another Yamina member to fill his place.

“I still have a slim hope and expectation that they’ll follow their truth,” he said.

“This is their test, and will be written down in the pages of history of the people of Israel forever.”

Yamina and Labor have both reportedly agreed to a compromise on the judicial appointments panel, that will see Yamina’s Ayelet Shaked as the coalition’s representative on the committee for the government’s first two years, and Labor’s Merav Michaeli replacing her for the latter two.

Three signature lines on the document declaring a new government has been formed were still empty as of 10 p.m. Israel time, but media reports claimed that progress was being made in the multi-party negotiations.

Yamina was reportedly proposing a rotational solution to the dispute over who will serve on the judicial appointments committee: Labor’s Merav Michaeli or Yamina’s Ayelet Shaked.

The party wants Shaked to sit on the committee first, even though Michaeli had already been promised the position in an agreement made with Yesh Atid leader Yair Lapid. On Tuesday, Yamina threatened that if Shaked did not get the coveted place, they would not join the coalition.

However, Labor party sources said that if such a rotation proposal existed, they were not aware of it, and dismissed it as “spin.”

A little later on in the jamboree, the “spin” charge disappeared as Michaeli was quoted as saying she’d go with a rotation—if she goes first. Shaked reportedly said no to that.

At stake is more than just ego, thought that can never be counted out. The Judicial Appointments committee is slated to select six new High Court judges over the next four years.

The committee is composed of the justice minister—putatively New Hope leader Gideon Sa’ar—one additional minister, an MK from the coalition and one from the opposition. There are also representatives from the current High Court and the Bar Association. 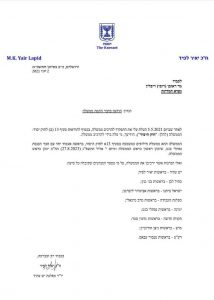 At around 10:00, the Southern Islamic Movement, of which Ra’am is a part, authorized MK Abbas to give his support to the coalition, Channel 12 news reported. Less than an hour later, a photo was posted on social media showing Masour Abbas, Yair Lapid and Naftali Bennett sitting around a table with papers, smiling for the camera.

Ra’am was showing flexibility after Zeev Elkin of New Hope declared that its demands for legitimizing illegal Arab housing “are impossible for me and for [Ayelet] Shaked. We will not agree to them under any circumstances,” according to a Kan news report. Channel 12 said the Islamists were “softening” their position.

In the end, an agreement was reached, though the details are not yet known.