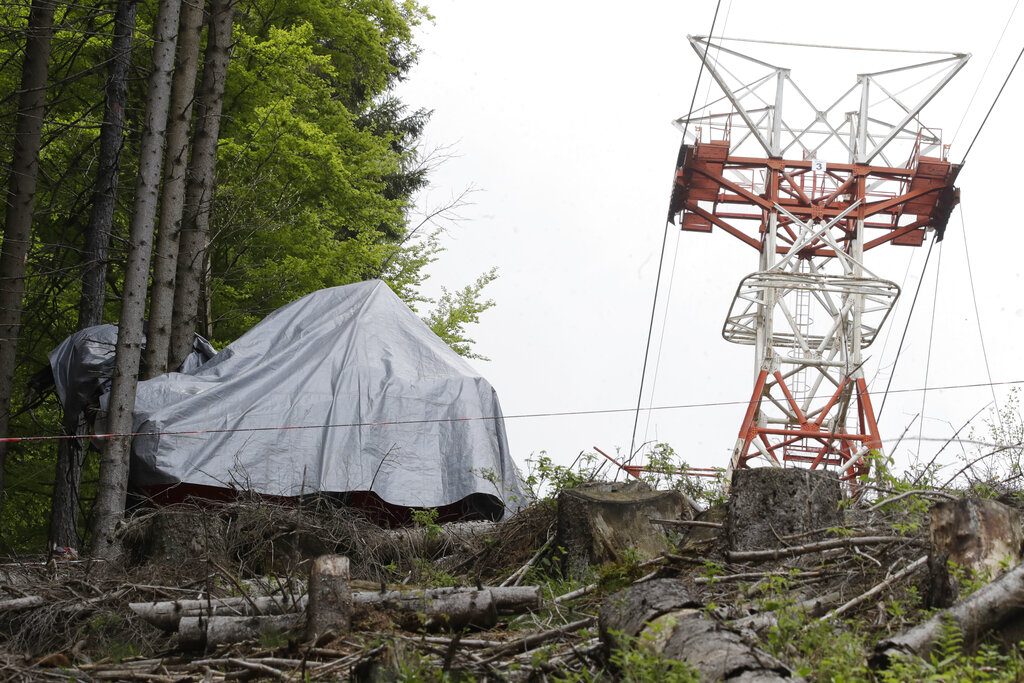 The three suspects in Italy’s cable car disaster that killed 14 people were allowed to leave prison Sunday after a judge indicated that for now blame fell on just one: a service technician who intentionally disabled the car’s emergency brake because it kept locking spontaneously.

Judge Donatella Banci Buonamici said there wasn’t sufficient evidence suggesting the owner of the Mottarone cable car company, Luigi Nerini, or the maintenance chief, Enrico Perocchio, knew that the technician had deactivated the brake on several occasions even before the May 23 disaster.

After evaluating prosecutors’ request for continued detention of the three, Buonamici determined there was no flight risk, ordered the managers freed while allowing the technician, Gabriele Tadini, to leave under house arrest. The three men, who remain under investigation, left Verbania prison early Sunday, accompanied by their lawyers.

Fourteen people were killed when the lead cable of the Mottarone funicular overlooking Lake Maggiore in northern Italy snapped and the emergency brake failed to prevent the cable car from reeling at high speed backward down the support line. The cable car pulled off the line entirely after passing the support pylon, crashed to the ground and then rolled down the mountain until it was stopped by a stand of trees.

The lone survivor, 5-year-old Eitan Biran, remains hospitalized but conscious, with his aunt looking after him. Eitan’s Israeli-born parents, his younger brother and his great-grandparents were killed in the disaster and their remains were sent back to Israel.

It isn’t known why the pulling cable snapped.

The Vipiteno, Italy-based company that maintains the lift, Leitner SpA, has said “no irregularities were detected” during the November 2020 magnetic testing of the lead cable, and that every other annual check hadn’t turned up problems either.

Tadini admitted during questioning that he had left a fork-shaped bracket on the cable car’s emergency brake to disable it because it kept locking on its own while the car was in service, said his lawyer, Marcello Perillo.

Speaking to reporters outside Verbania prison, Perillo said Tadini never would have left the bracket in place if he thought doing so might endanger passengers.

“He is not a criminal and would never have let people go up with the braking system blocked had he known that there was even a possibility that the cable would have broken,” Perillo said. “He can’t even begin to get his head around the fact that the cable broke.”

Based on Tadini’s testimony, prosecutors had hypothesized that the managers knew about the jerry-rigged brake and had an economic reason in using it to keep the funicular running. Prosecutor Olimpia Bossi said the owner would have had to have taken the whole lift out of service for the more extensive, “radical” repairs that were necessary.

The lift, which features four large tram cars bringing passengers up and down the mountain, only reopened on April 26 after a lengthy COVID-19 shutdown and was gearing up for the summer tourist season in a picturesque part of northern Italy.

But lawyers for Nerini and Perocchio said the two denied knowing anything about Tadini’s maneuver and said they had no reason to let a cable car without a brake system operate. The judge concurred, noting that neither they nor Leitner, the maintenance company, would have had an interest in doing so.

Nerini’s attorney, Pasquale Patano, said the owner “had no interest in not repairing the cable car” since he paid a flat fee of 150,000 euros ($183,000) a year for unlimited maintenance from Leitner to keep the funicular safe and operational.

Perocchio similarly denied any knowledge of Tadini’s maneuver, according to his lawyer Andrea Da Prato, who suggested his client had been arrested because the prosecutor felt pressure to produce quick results in the investigation into the tragedy.

As he left the prison, Perocchio said he was “desperately sad” for the victims and never would have authorized disabling the emergency brake.

“I’ve been working in cable cars for 21 years and I know there’s no reason in the world to do that,” he told reporters.

The judge’s ruling noted that Tadini had called Perocchio twice to send in repair crews since the lift reopened because of the brake problem, but that the problem persisted after the crews left. Even though Tadini insisted that Perocchio and Nerini knew about his patchwork repair, the judge said he likely was trying to share the blame on the people who could afford to pay damages, and wasn’t a credible enough witness to warrant their continued detention.

Leitner, the maintenance company of which Perocchio is an employee, has said that using the fork-shaped brackets was “expressly forbidden” when passengers were in the cabin. The brackets are meant to be used when the cabin — part of a transport system known as an ae

rial tram — is parked in the station for the night or to do repair work.
Leitner has provided investigators with documentation of the lift’s maintenance record and declared itself an injured party in the case, saying it plans to donate any awarded damages to the families of the victims.