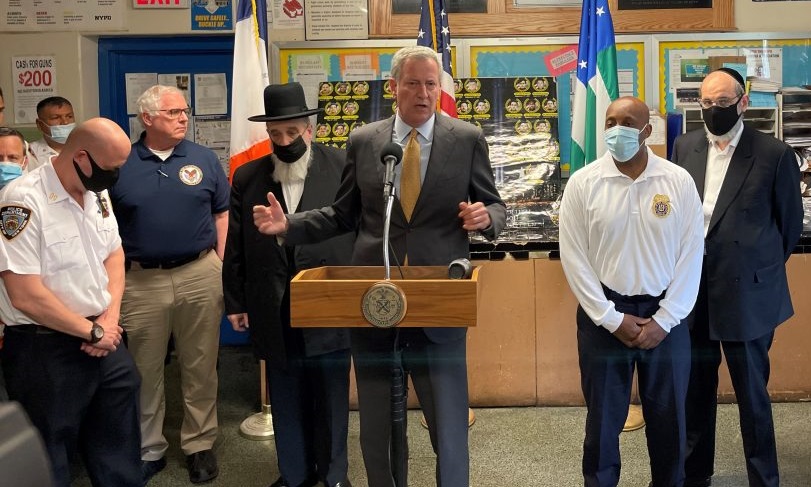 Less than 18 months ago, the Jewish community on the U.S. East Coast received a terrifying wake-up call with the tragic attacks in Jersey City and Monsey, which came only a year after a mass shooting attack against Jews in Philadelphia. With the passage of time, we were lulled back into what proved to be a false sense of security, led to believe that horrific antisemitic attacks in the tri-state area — home to the largest Jewish community in the Diaspora — was an anomaly. Now, a spate of disturbing antisemitic incidents in recent days has forced us to discard that assumption.

While, baruch Hashem, none of the attacks caused injuries that were life-threatening, it is crucial that the seriousness of the matter and the gravity of the threat that these attacks represent not be underestimated.

For decades, even during times of intense conflict in the Middle East, Jews and Muslims lived in peace and tranquility in Brooklyn and other American neighborhoods. We recognize that the majority of Muslims want to keep it that way, and the attackers represent a small minority. However, history has repeatedly shown the danger a violent minority can pose and the conflagration they can cause.

Only the Ribbono shel Olam, the Shomer Yisrael, can protect us and shield us from harm — but along with tefillah, we are obligated to undertake our hishtadlus as well. A key part of the latter is demanding from local, state, and city governments that they fulfill their duties and insist that they keep their promises.

On Friday afternoon, in response to a series of disturbing incidents in Manhattan, at the request of Agudath Israel of America, NYC Mayor Bill de Blasio met with representatives of Agudah and the two Satmar kehillos. The Mayor, joined by top NYPD brass, promised immediate action and a significant police presence yet, over Shabbos, if anything, it was the lack of police presence that was startlingly conspicuous.

On Sunday, when pressed by a Hamodia reporter, the Mayor acknowledged that the response “didn’t happen the way it needed to, and that’s on all of us; and we need to fix it immediately.”

In the days and weeks to come, the community will discover whether the “fix” will indeed become a reality. But while a heavy police presence is an important first step, it is not a long-term solution. The members of the Jewish community shouldn’t have to feel that they are living in a heavily guarded prison — it’s those who seek to harm them that ought to be imprisoned.

This, in turn, demands a determined effort by both law enforcement and the district attorney’s office to seek the maximum criminal penalties for anyone convicted of hate crimes. It is often tempting for prosecutors to avoid the hassle of going to trial, and strike plea deals that allow perpetrators to avoid serious jail time. This approach may lighten the load of the court dockets but fails miserably to deter repeat offenders as well as those who emulate their hate-raged attacks.

A closer look must be taken at existing State laws, not only to heed the calls made by State Assemblyman Simcha Eichenstein and others to ensure that judges can at least demand bail before setting free people charged with hate crimes, but to make stiffer prison sentences and send a real message to those responsible that they will pay a significant personal price for their actions.

Jewish blood is not water, and both elected officials and every level of law enforcement have to start taking their responsibilities to fight antisemitism seriously.

A clear message must be sent to those elected officials — including Senators and members of Congress — whose remarks and tweets have inflamed tensions and possibly even played a role in inciting these attacks: Words have consequences, and our lawmakers should not be aiding and abetting haters and lawbreakers.