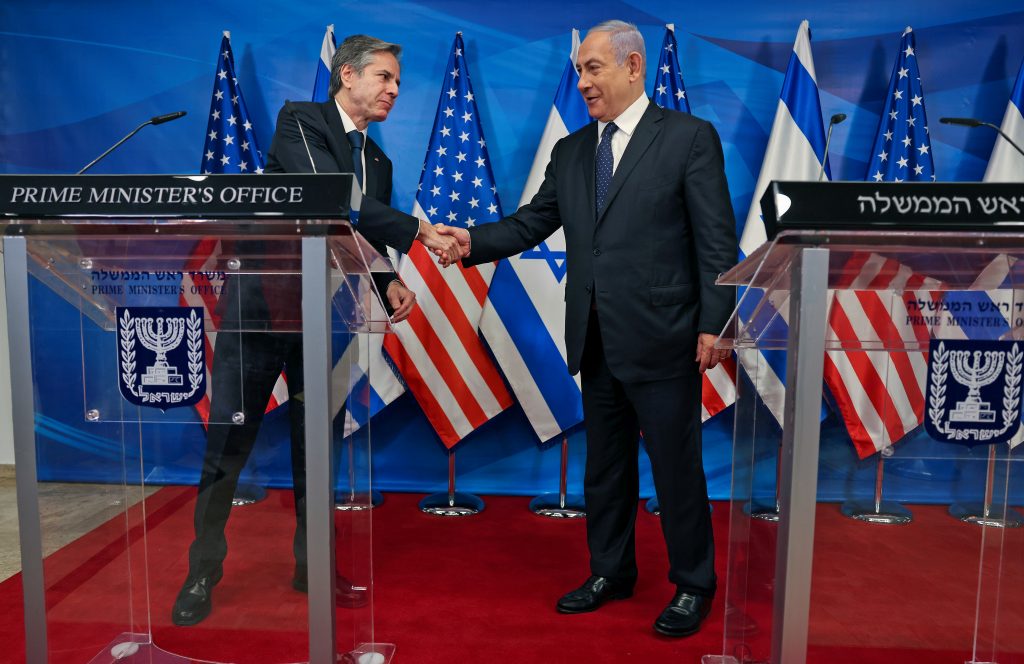 In tandem with Blinken’s mission, Israeli authorities said they were allowing fuel, medicine and food earmarked for Gaza’s private sector to enter the territory for the first time since 11 days of cross-border hostilities started on May 10.

Blinken was also due to visit Ramallah, Cairo and Amman, with the United States harboring “every hope and expectation” the ceasefire would continue to hold, a senior State Department official said.

“Our primary focus is on maintaining the ceasefire, getting the assistance to the people who need it,” said the official, who spoke on Monday on the condition of anonymity. Egypt brokered the truce, in coordination with the United States.

But the official suggested it was too early for wider peace talks between Israel, in political flux after four inconclusive elections in two years, and the Palestinians, divided by enmity between Hamas and Western-backed Chairman Mahmoud Abbas.

U.S. President Joe Biden has said a two-state solution was the only answer to resolving the Israel-Palestinian conflict, and pledged a major package with other countries to help rebuild Gaza. Israeli-Palestinian peace negotiations collapsed in 2014.

Hamas, which is regarded by the West as a terrorist group and opposes any Palestinian peace efforts with Israel, began cross-border rocket attacks on May 10, drawing Israeli airstrikes.

The IDF put the death toll in Israel at 13, with hundreds treated for injuries after rocket salvos caused panic and sent people as far away as Tel Aviv rushing into shelters.

Commercial buildings, residential towers and private houses across the Gaza Strip were damaged or destroyed by the time the ceasefire was announced.

Israel says air strikes hit legitimate military targets and that it did its utmost to avoid civilian casualties, including giving prior warnings when it was about to strike residential buildings that it said also had a military use.

Speaking to the press in Yerushalayim alongside Prime Minister Binyamin Netanyahu, Blinken said that the U.S. supports Israel’s right to self-defense and will also be heavily involved in and committed to rebuilding Gaza after the latest round of fighting, and to seeking a political solution to the conflict.

“President Biden asked me to come here today for four reasons,” Blinken says. “To demonstrate the commitment of the United States to Israel’s security, to start working toward greater stability” in the wake of the fighting, to jumpstart “urgent humanitarian reconstruction in Gaza,” and to “continue to rebuild our relationship with the Palestinian leadership and Palestinian authority.”

America will invest in Gaza, he said.

“We know that to prevent a return to violence we have to use the space created [by the ceasefire] to address a larger set of challenges, including tackling the humanitarian crisis in Gaza, and starting to rebuild. We will announce a significant US contribution later today. We will work with our partners to ensure Hamas does not benefit” from the aid.

“We also need to work to expand opportunity in Gaza and the West Bank. Investments like these will help foster a more stable environment that will benefit both Palestinians and Israelis.”

Blinken said that he spoke with Netanyahu about “other steps that will help set both sides on a course to a better future.”

Blinken added that the healing wounds of internal Arab-Jewish violence in Israel will require leadership in all sides.

Blinken also added: “Losses on both sides were profound. Casualties are often reduced to numbers, but behind every number is an individual human being — a daughter, a son, father, a mother, a grandparent, a best friend. And as the Talmud teaches, to lose a life is to lose the whole world.”

Netanyahu said that he hopes the U.S. will not return to the original JCPOA and added that Israel “will always reserve the right to defend ourselves against the Iranian regime and because we believe that deal paves the way for Iran to have an arsenal of nuclear weapons with international legitimacy.”