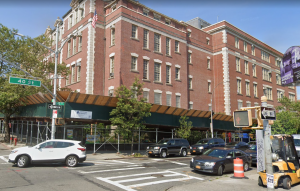 A public-school principal in Brooklyn has apologized to school staff, after being ordered to do so by the New York City schools chancellor, for sending an email from her school account calling for “solidarity with the Palestinian uprising.”

In the email sent last Wednesday as war raged in Israel and Gaza, Amanda Bueno, principal of the Charles O. Dewey Middle School (MS 136) in Sunset Park, wrote to teachers and administrators, “If you have been watching the news in absolute horror, you are not alone,” and provided “some notes and resources from the Intitute [sic] for Anti-Racist Education,” an organization whose mission, according to its website, is “creating anti-racist classrooms with decolonized curriculums,” and that seeks “to help districts and educators begin dismantling oppressive practices.”

The message, which had the subject line “Day of Action in Solidarity with The Palestinian Uprising & General Strike,” included hashtags #SaveSheikhJarrah and #GazaUnderAttack.

“You can take action today by protesting, attending a vigil, making a public commitment to Palestinian Liberation, signing a petition, or calling your government officials to place sanctions on Isreal [sic],” reads the email. “The time is now to take a stand for those impacted by state-sanctioned violence and crimes against the humanity of the most vulnerable in our world.”

The message also urged, “As US governments push to restrict anti-racist education in several states, we must keep pushing forward! Sign petitions, call your state officials, share on social media, divest your funds from companies that invest in human rights violations, talk to your family and friends about what is happening, send your donations, and offer space for racial healing and truth-telling in your classrooms,” and included links to “resources and lesson plans,” as well as a link to an article from left-wing site The Real News Network titled, ” ‘American taxpayer money is being used to commit human rights violations’” in Israel, says Rep. Rashida Tlaib.” The existence of the email was first publicized by Inna Vernikov, an attorney and pro-Israel activist and Republican candidate for the City Council’s 48th District, and Hamodia subsequently obtained a copy.

In a letter she sent Thursday night to New York City schools Chancellor Meisha Porter, Vernikov wrote that Jewish teachers in the school received the email in “horror.” Some of these teachers have family in Israel living under rocket barrages, Vernikov wrote, but the teachers “are intimidated and afraid to speak out to counter such messages in fear of losing their jobs.”

“No city employee should be allowed to espouse and push their political views or agenda onto other employees or subordinates with impunity,” wrote Vernikov, who chairs the Women’s Committee of the organization Americans Against Antisemtisim. “Teachers should not be made to feel intimidated by their higher-ups. Any employee of a New York city public school who calls on its colleagues or subordinates to engage in political activity should be immediately reprimanded.”

Bueno did not respond to a request for comment from Hamodia on Friday morning.

Department of Education spokesperson Nathaniel Styer told Hamodia in a statement Friday afternoon, “Schools are not public forums for purposes of political expression, and staff may not use DOE resources in the furtherance of personal or political activities. The matter is being addressed internally and was referred to [the Special Commissioner of Investigation] for further investigation.”

The DOE also said that students should learn in a politically neutral environment and employees should refrain from advancing their own personal political views and avoid the impression that the school is endorsing any particular political perspective or point of view.

Councilman Kalman Yeger, who represents a neighboring district of largely pro-Israel Orthodox Jews, told Hamodia that Bueno “doesn’t sound like somebody who should be involved in educating New York City’s schoolchildren.”

On Saturday, Chancellor Porter tweeted that Bueno “must apologize for her email. This was a clear exercise of poor judgment & we will take appropriate follow-up action. We must teach complex current events without bringing our political activities or beliefs into the classroom.”

Hours after Porter’s tweet, Bueno sent an email to staff Saturday, obtained by Hamodia, in which she apologized for her earlier message.

“As the Principal of a diverse school community who is committed to social justice causes and human rights concerns, I want to apologize for using school email to strongly communicate my personal views and not being as inclusive and mindful of other perspectives as I could have been,” Bueno wrote.

“It was not my intention to inflame tensions on this sensitive issue. I apologize for any added hurt, anger, or misunderstanding my email may have caused.

“In the spirit of maintaining a learning stance and fostering open discussion, I encourage us all to facilitate age-appropriate, relevant discussions with our students that include and respect a variety of viewpoints and engage in an open dialogue with one another on these important issues.”

While Bueno’s apology satisfies Porter’s tweeted demand, it will not necessarily get her off the hook. The Special Commissioner of Investigation’s review of the matter is ongoing, and may result in disciplinary action.

Bueno will continue working during the investigation.