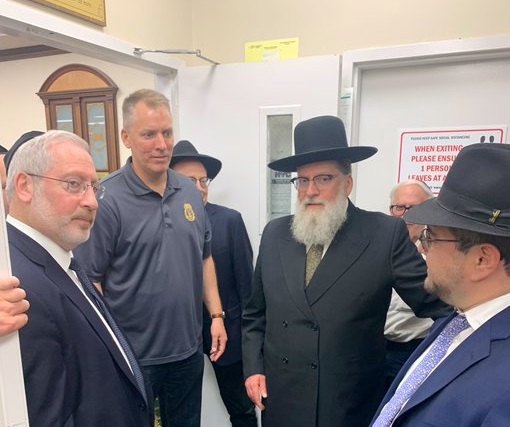 In the aftermath of several distressing acts of anti-Semitic hate crimes in Brooklyn over the past few days, Chief of Department Rodney Harrison met on Sunday morning with Flatbush Shomrim, the Flatbush Jewish Community Coalition (FJCC), and local community leaders to hear their concerns and allay their fears.

After meeting with the representatives of the Flatbush community, Chief Harrison went with them on a walking tour of the neighborhood, where he dropped in on several stores to hear the concerns and fears of the residents and business owners.

Later in the day, New York City Police Commissioner Dermot Shea met with these leaders in the Agudas Yisroel of Avenue L and addressed the kehillah, reassuring them that he understood their concerns and assuring that the NYPD will provide additional presence going forward.

During the afternoon dismissals at the yeshivos in the neighborhood, every mosad had police stationed by the school, and there was a noticeable increase in police cars around the neighborhood.

“We understand that some 20 additional police vehicles were brought in from other precincts, and they are stationed at key locations and patrolling the neighborhood with their lights flashing, which will add a deterrent factor and help reassure the residents that the police are here to protect us,” said Josh Mehlman, Chairman of the FJCC. “The extra presence will be visible in Boro Park and Flatbush, and Williamsburg and Crown Heights will receive special attention as well.”

The Brooklyn District Attorney spoke with FJCC  leaders as well, and explained that he instructed his staff to prosecute any hate crimes to the full extent of the law.