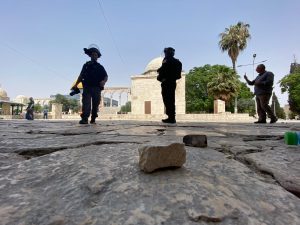 As the Islamic Friday noon prayers ended on the Har Habayis, hundreds of young people began rioting by throwing stones and a Molotov cocktail at the Israeli police forces.

Muslim worshipers expelled Palestinian Mufti of Jerusalem Sheikh Mohammed Hussein from al-Aqsa Mosque, accusing him of “ignoring” Hamas and the Gaza Strip and prevented him from completing his sermon, The Jerusalem Post reported.

The protesters shouted, “We are the men of Mohammed Deif,” a reference to the military commander of Izz ad-Din al-Qassam Brigades of Hamas, as bodyguards whisked the mufti away from the mosque.

Other worshipers shouted: “Go away, go away, we don’t want to see the dogs of the Palestinian Authority.”

Hussein, a resident of east Jerusalem who holds an Israeli-issued ID card, often stands next to PA President Mahmoud Abbas at public events, is considered the most senior representative of the PA at al-Aqsa Mosque compound.

The commander of the Yerushalayim district, Doron Turgeman, ordered police forces to enter the compound and deal with the rioters and arrested 9 of them, while allowing those not involved in the rioting to exit through the gates. Police forces and Border Police used stun grenades and are working to restore order.

District commander, Superintendent Doron Turgeman, who is in charge of the police forces and the Border Police, ordered to enter the plaza without entering the mosques and successfully dispersed the rioters.

Kan News reported that Border police were stationed at the entrances and exits of several neighborhoods including Issawiya and Silwan, and are thoroughly checking all vehicles entering and exiting the area.

Hamas is planning demonstrations in Hebron, Ramallah and Huwara south of Nablus to celebrate the “victory of the resistance.” The Palestinian Authority intends to begin arresting members of Hamas in the West Bank.