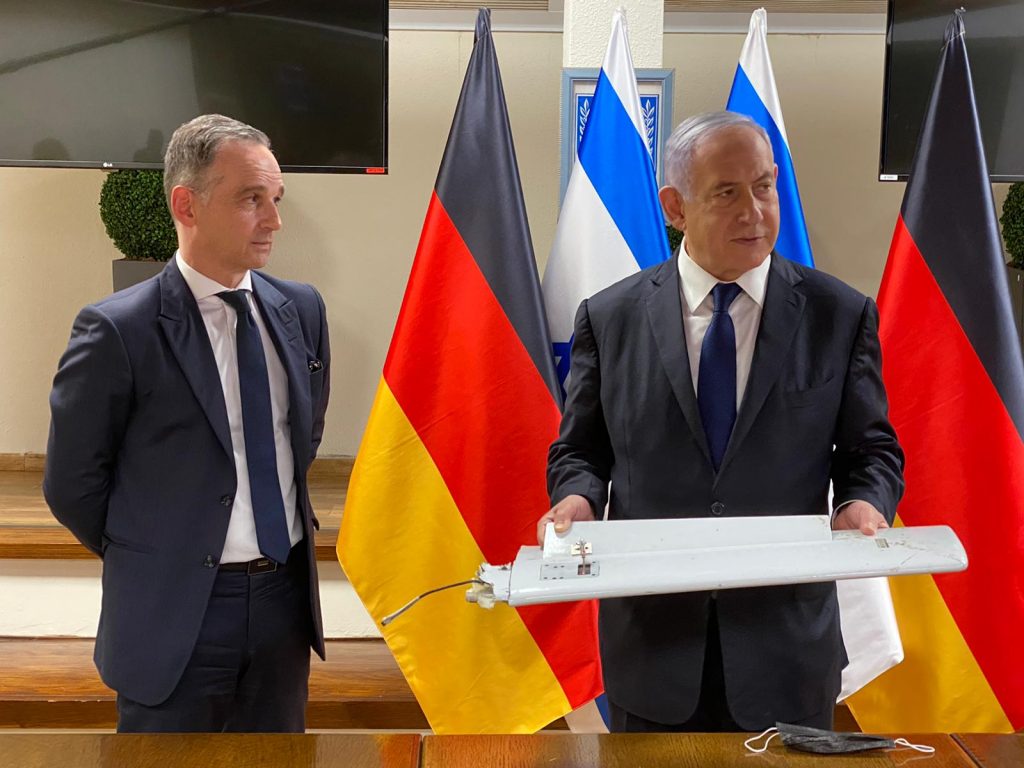 Prime Minister Binyamin Netanyahu said on Thursday that a drone intercepted earlier this week in northern Israel was an armed UAV sent by Iran.

He presented the part of the drone – which was intercepted by the IDF near the northern town of Beit She’an – during a meeting with visiting German Foreign Minister Heiko Maas, saying that the incident was evidence of Tehran “supplying the infrastructure that terrorist organizations lean on.”

“As we are in the midst of fighting, several days ago, Iran sent an armed UAV into Israel from Iraq or Syria,” he said. “Iranian forces launched an armed drone, which our forces intercepted on the Israeli border with Jordan. I think this says everything about the real patron of terrorism in the Middle East and the World – Iran.

“In our meeting, I described that while we are fighting on multiple fronts, those who stand behind numerous acts of aggression is Iran,” Netanyahu said. “Not only is Iran supporting Palestinian Islamic Jihad in Gaza and funding it, but it is also giving weapons to Hamas and Hezbollah.”

Following a meeting with Maas in IDF Central Command in Tel Aviv, Netanyahu thanked Germany’s unwavering support for Israel’s right to self-defense, calling the German top diplomat a “true and honorary friend of the people of Israel.”

Maas, who arrived at Israel Thursday alongside Czech Foreign Minister Jakub Kulhánek and Slovak Foreign Minister Ivan Korčok, said he came to express Germany’s full solidarity with Israel. He added that Germany condemns Hamas’ terror attacks on Israel, whom he said are behind this current escalation in violence.