Three Republicans Running for NY Governor, Will Head to Primary 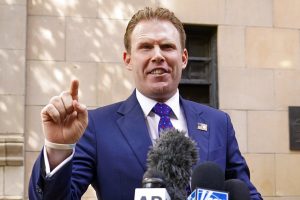 New York will have its first GOP gubernatorial primary in more than a decade, as three Republicans have announced their campaign to challenge incumbent Democrat Governor Andrew Cuomo.

Cuomo, in his third time, is widely expected to run for a forth term, but may be encumbered by  allegations of mishandling the coronavirus crisis and inappropriate workplace conduct.

The last Republican governor primary was in 2010, and in 2018 the state Republican party struggled to find a challenger to Cuomo.

Zeldin’s campaign has said it has raised $2.5 million so far, and Republican State Committee Chairman Nick Langworthy is reportedly considering him the most viable nominee, the Wall Street Journal reported. Zeldin has said he would roll back Democrat policies such as an income tax increase and bail reform law. He said that he believed moderate voters would want a Republican governor to balance out the Democrat’s supermajority in Albany.

“A primary is good in that our Republican principles and issues are going to get the spotlight for a year,” he said.

The GOP has an arduous path ahead of them to the governor’s mansion: Cuomo has an $16.8 million war chest, and Democrats outnumber Republicans 2 to 1 in New York.