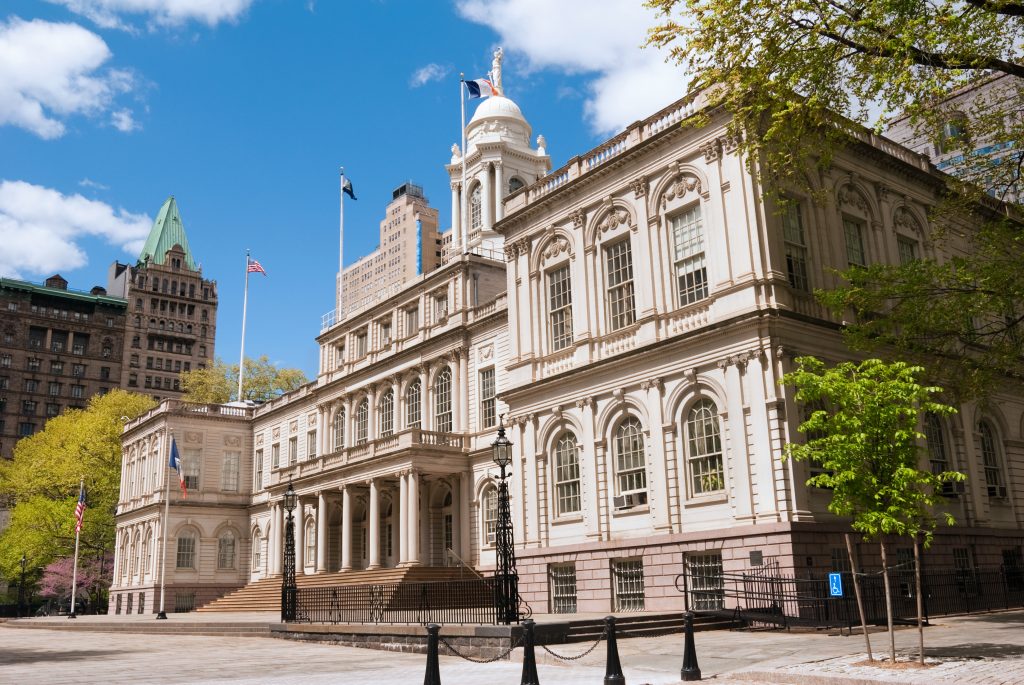 Brooklyn Borough President Eric Adams and city Comptroller Scott Stringer, who have generally been running second and third, respectively, in polls, took aim at leading candidate Andrew Yang, an entrepreneur who has never held political office. Stringer declared, “We cannot afford a mayor on training wheels; I’ll be ready on day one,” and Adams, speaking of this “challenging moment for New York, especially working people,” said, “We’ve been here before — in fact, some of us never left,” an apparent shot at Yang, who fled the city during the Covid pandemic for his second home in New Paltz, New York.

With New York City reeling from gun crime, along with the fresh memory of Black Lives Matter protests for police reform and defunding, candidates expressed diverging views on crime and policing, though many spoke of the need to combat the flow of illegal guns into the city, and also institute mental-health and community-based reforms.

Yang and Adams, two of the more moderate candidates, agreed with calls for community-sensitive reform but opposed the wholesale changes that progressives have been calling for. “The police are going to be a core way for us to address the public-safety concerns that so many New Yorkers have,” said Yang. “And let me be clear: defund the police is the wrong approach for New York City.”

Adams, a former NYPD captain, said, “If we don’t reinstitute a plainclothes unit … of well-trained police officers to go after gang behavior — those gangs are driving the crime in the city — and stop the flow of guns to the city, we’re going to lose more young people. Ninety-five percent of those who are victims to gun violence are black and brown; ninety-five percent of the shooters are black and brown.”

Stringer, who has generally been a moderate during his 30 years in office but has taken a progressive turn during the past several years, recalled growing up in the high-crime 1970’s and said, “I understand that we can never go back to those days,” but that “we cannot in this moment simply go back to the Giuliani style of policing that impacted black and brown children that scarred them, and we have to seek a better way.”

Ray McGuire, a former Citigroup executive, said, “The leadership of this city has … a contract with New Yorkers for safety, “ but “by the same token, it’s very personal to me — I’m a 6’4” 200-pound black man. I want to have the police protect me and not profile me.”

Former Sanitation Commissioner Kathryn Garcia said the city needs to “instill a new culture, where [the Police Department] are guardians rather than warriors against their communities, where we have real neighborhood policing, and we are actually measuring the interactions with community rather than the number of arrests,” and the must have “clear and transparent discipline to instill trust in the NYPD.”

Shaun Donovan, a former HUD secretary, New York City housing commissioner and Director of the White House Office of Management and Budget, said, “Every police officer in this city needs to have two clear missions: to reduce violent crime and gun violence, and to treat every New Yorker with respect, especially in our black and brown communities,” and said he would be “reinvesting $3 billion into our communities from our criminal justice system” broadly, such as the jail system, and not necessarily directly from the NYPD.

Dianne Morales, a former nonprofit executive generally considered the most progressive of the eight candidates who qualified for the debate, said she shares “every New Yorker’s desire to live in safety, but the reality of it is that safety is not synonymous with policing.” Morales said that “our communities are over-policed and under-resourced,” and that “we need to invest in our communities.”

Civil-rights lawyer Maya Wiley, another progressive candidate, said, “I have been black all my life, and that means I know two things: I know what it is like to fear crime, and I know what it’s like to fear police violence. And we have to stop having this conversation making it a false choice, telling folks that you have to choose one or the other.” Wiley said that as mayor, she would “take a billion dollars from the New York City Police Department, to shift that money to create trauma-informed care in our schools, because when we do that violence goes down and graduation rates go up.”

Another major issue facing the next mayor is that of the city’s recovery from the Covid pandemic. Wiley and Morales called for the city to create new jobs through public works and infrastructure; Adams spoke of attracting new businesses to the city and reducing bureaucracy; Garcia said she would make businesses get just one permit, not multiple ones from different agencies, and would also give free childcare to New Yorkers earning under $70,000 a year.

Yang said the city has to “be a genuine partner to the restaurants and small businesses that are trying to recover,” and that he would declare a moratorium on all fines for small businesses.

Asked to name a regulatory reform they would enact to ease the burden of small businesses, many of candidates responded with fixes for restaurants specifically, which have been struggling during the Covid pandemic.

Garcia said health inspectors should schedule appointments at restaurants rather than showing up unannounced; Stringer would “overhaul the Department of Buildings” and “ban the use of an expediter”; Yang said he would “cap delivery fees [from third-party services] and make sure that every restaurant actually has access to its customers’ data,” and would help small businesses negotiate settlements for back rent. Donovan would “fundamentally change our approach for restaurants” to allow for a full post-Covid reopening; McGuire would ease the regulations and fines associated with “building outdoor restaurants” Adams and Wiley said they would ease the laws regulating signage in front of businesses, and Morales said she would make Arabs, who are currently not included in the city’s MWBE (Minority and Women Owned Business) programs, eligible for that support.

Yang, whose sole political experience consists of a presidential run in 2020, was challenged on his failure to have voted in any past local elections. The candidate acknowledged that while he has “not been involved locally,” now “I see that we’re in a crisis, and so many of us need to step up in new ways and do everything we can to help,” and that “I’m not someone who thinks that all of the energy and ingenuity in our city lies just in government agencies.”

McGuire, also asked about his being a successful businessman but with no government experience, said that “the city now needs a leader in whom they can trust, in whom they can believe,” that he has been “know for my deeds and not my words,” and touted his philanthropic efforts for minority education. “We need a new leader who can bring about a change,” McGuire said.

Stringer, who was recently accused of harassment by a volunteer on a 2001 political campaign, reiterated his innocence. “This is an allegation that’s not true” said Stringer. “I do think we have to look at fact, and we have to investigate and acknowledge, and I hope the voters will listen to me in the coming weeks.”

Adams, most associated with his anti-crime agenda, recently received the endorsement of the conservative New York Post — not necessarily a positive in a Democratic primary. Adams, who years ago was a registered Republican, and who speaks of cutting city government, was asked by moderator Louis whether he may be “too conservative for New York.” The candidate responded that “President Obama was also endorsed by The Post and he was one of the greatest presidents we’ve ever had,” noted that Post acknowledged that it didn’t agree with him on all issues, said his budget cuts would strictly be for inefficiencies, and declared, “I’m a Democrat, and I know Democratic values, and I’ve been fighting on behalf of Democrats for over 35 years.”

Each candidate was allowed to ask a question to one other candidate, and most hit at the frontrunners. Adams accused Yang of holding a press conference when there was a shooting “blocks from your home,” but ignoring “those black and brown families that witness shootings in their communities.” Yang, whose campaign is being run by the firm of lobbyist Bradley Tusk, was asked by Stringer to “join me in making sure that we don’t give access to the power brokers in an administration.” Donovan took aim at Yang’s political inexperience, saying, “This is the most consequential election of our lifetime; this is not time for a rookie as mayor,” and for Adams, for declaring that as mayor he would carry a gun and use a reduced security detail. “At a time where gun violence is spiking,” Donovan asked the former police captain, “how can you justify carrying a gun?”

As Wiley and Adams clashed over whether Adams had supported or opposed stop and frisk, Adams remarked, “I told everyone at the beginning of the race, once candidates start getting desperate it’s going to get a little nasty.”

Most polls have shown Yang leading the race and Adams second, with Stringer and Wiley third and fourth. But a poll released last week and one released Thursday show Adams leading Yang for the first time.

Kathryn Garcia, who had been near the bottom of most polls, got an unexpected boost Monday night with the endorsement The New York Times. In the poll released Thursday, only 4% of those surveyed by Monday ranked Garcia first; but after the Times endorsed her Monday night, she received 11% of first-place support from subsequent respondents.

The June 22 primary will be the first mayoral race that will use the new ranked-choice voting system, in which voters can rank up to five candidates in order of preference.

Asked at Thursday evening’s debate whom they recommend their voters put #2 on their ballot, Donovan said Wiley, Wiley said Morales, McGuire and Yang said Garcia. Adams, Garcia, Morales and Stringer said they have not decided yet.

Several of the questions asked at the debate, in which candidates appeared virtually, were a “show of hands” yes or no answer.

With increasing subway crime, the MTA has asked for more police officers in the subway system. Asked by debate moderator Errol Louis of NY1 whether they would “respond to a request like that by sending more cops into the subway system,” five of the candidates raised their hand; Morales, Stringer and Wiley did not. Asked by debate moderator Brian Lehrer of WNYC whether they would require all new police officer to live in the city, all the candidates raised their hands.

All candidates except Yang raised their hand when asked if they would “commit to making the composting program citywide.”

One question all candidates agreed on: asked whether they had ever voted for a Republican, no hands went up.