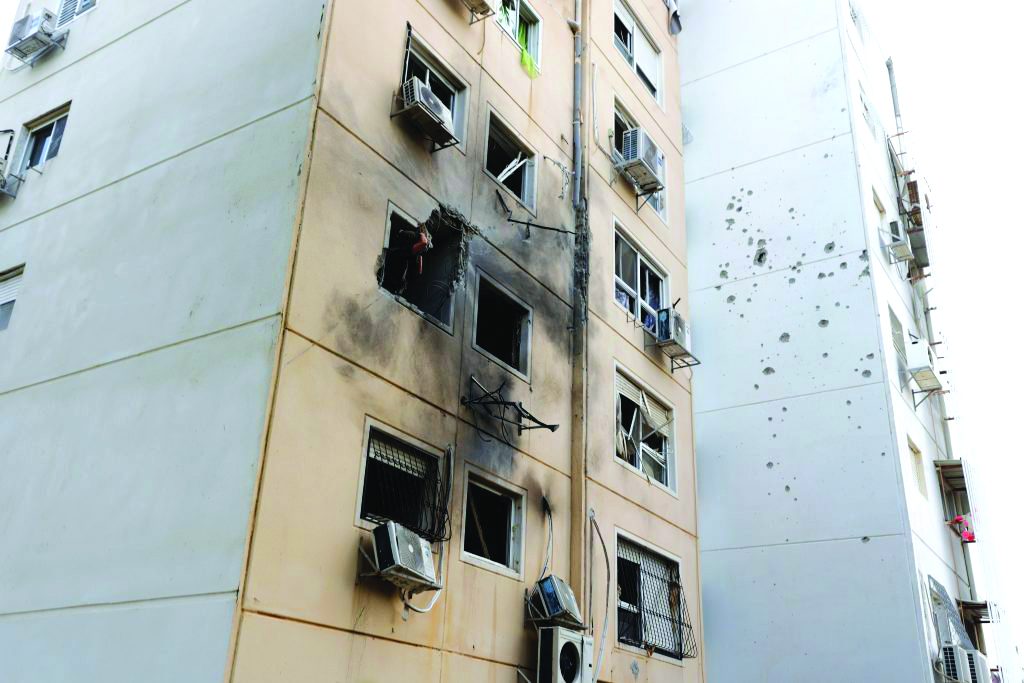 Two women were killed, Hy”d, in Ashkelon, and two others seriously wounded, by rocket fire from Gaza on Tuesday afternoon. Another woman was killed later in Rishon Letzion.

In the early morning, at least six civilians — including four members of the same family — were wounded when two residential buildings in the city were struck. The father of the family was seriously wounded, his wife was moderately wounded, and the two children were lightly hurt. Two other residents of the building also sustained minor injuries.

Gaza terrorists fired more than 300 missiles into Israel since Monday evening. As of Tuesday midday, Ashkelon and Ashdod sustained dozens of rocket hits in what Hamas called the “largest barrage ever.” Sirens were heard in an almost unbroken stream.
Terror group Hamas’ military wing announced: “The next barrage will be even bigger.”

The IDF retaliated with more than 130 airstrikes on Hamas targets, killing 15 terrorists and destroying weapons factories, arsenals, terror tunnels, an intelligence office and the home of a senior Hamas operative. The IDF retaliation has been dubbed “Operation Guardian of the Walls.”
Ashdod also came under fire, with an ulpana religious girls’ high school taking a direct hit. B’chasdei Hashem the school had been closed down on order of the Home Front Command.

Four people, including a young girl, were lightly hurt in Ashdod after suffering shrapnel wounds. Magen David Adom teams also treated a man in his 40s, who had been lightly hurt while running for the bomb shelter.

IDF Chief of Staff Lt. Gen. Aviv Kochavi earlier yesterday ordered the reinforcement of the Gaza Division with infantry and armored brigades along with the continued redeployment of intelligence and air units.

Kochavi also ordered the continued striking of Hamas and Palestinian Islamic Jihad weapons and storage sites as well as the expanding of the strikes to other targets including operatives of the terror groups.

“The IDF will continue to act resolutely to restore security to the residents of the south, and all commands must prepare for the expansion of the campaign, with no time limit,” the IDF said in a statement.

IDF Spokesperson Brig. Gen. General Hidai Zilberman said in a statement: “The campaign in Gaza is one that we have been preparing for.”
Zilberman said that the IDF plans to “continue its high-intensity strikes over the coming day. We have bolstered the deployment of Iron Dome batteries in the southern and central sectors. We are ready for any scenario, including a wide-scale escalation.”

Defense Minister Benny Gantz declared a “special security situation” in the area 80 kilometers (50 miles) from the border. School was suspended in many cities, with residents advised to remain close to shelters.

Hospitals in the south were put on emergency footing. Be’er Sheva’s Soroka Medical Center began moving patients to fortified wards. A spokesperson said the hospital has opened an emergency command center and has put all critical staff on standby.