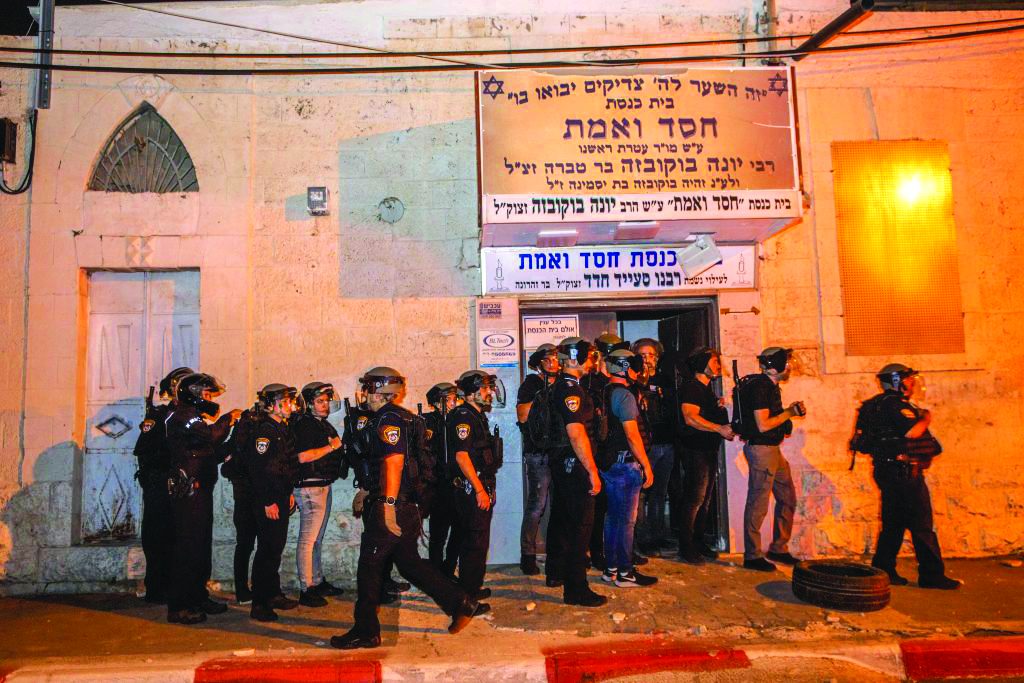 Israeli Arab mobs pillaged shuls and desecrated sifrei Torah in Lod and Ramle on Monday night, in an apparent show of solidarity with Hamas in the Gaza Strip. The rioters also rampaged in the streets, leaving behind significant damage and destruction.

One rioter was killed by an Israeli in a Jewish neighborhood in Lod who feared for his life. Police, who did not arrive at the site during the riot despite having been called by residents seeking help, showed up in the morning to arrest the man.

In a statement, it said: “The harsh images of desecrated and burned synagogues must shock every citizen of every religion. Synagogues are the beating heart of Judaism, and in the State of Israel their status is no less than symbols of government. The Israel Police is called upon to act with all its might to guard the synagogues and enforce the law.”

Lod Mayor Yair Revivo said yesterday that it was a “sad morning for all of us in Lod. Seventy years of coexistence were trampled by Arabs in a series of pogroms, vandalism and damage to symbols of government. Windshields were shattered, Molotov cocktails were thrown at the new town hall we moved into just last week, enormous damage was done to the mosaic museum, batei knesset and a Talmud Torah were set ablaze, as were dozens of vehicles, garbage containers and Israeli flags. We saw the Israeli flag lowered and a Palestinian flag hoisted in its place, on a night of riots that wounded policemen and besieged residents.

“Nothing justified such severe acts of hatred,” he said.

The mayor said he issued an order to repair all the damage, to “convey a clear message to the extremist rioters, that we would not allow them to disrupt our lives.”

The mayor of the city of Lod, Mr. Yair Rebibo, said on Channel 12 news, “Lod is close to civil war. There is no army and no police on the street. I was the one to tell Netanyahu to bring Ra’am to the government, but whoever is behind what’s going on here is the Muslim Movement.”
The mayor begged with authorities to decree a military curfew in the entire city.

Reporter Amit Segal tweeted: ‘If the Army Does Not Enter Lod Immediately to Stop the Arabs, the Meron Tragedy Will Be Minor Beside It.’
In response Netanyahu tweeted, “Border police units will be transferred from Yehudah and Shomron to Lod immediately.”

Ra’am MK Mansour Abbas said, “I am calling all demonstrators to realize their legal and legitimate rights to demonstrate and to express their opinion in a responsible manner, without harming human life.”