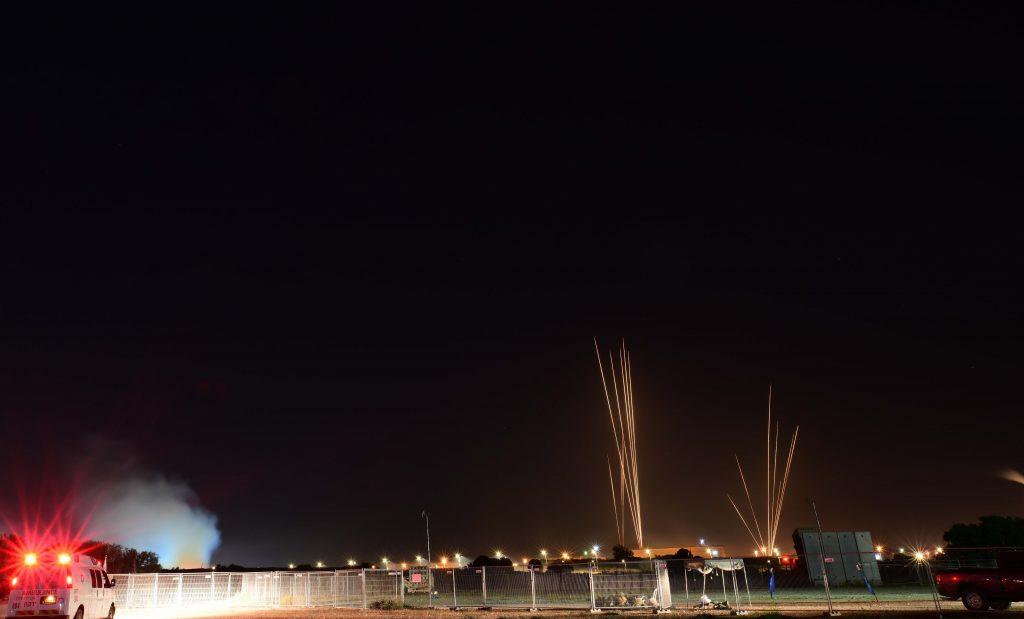 Hamas carried out its threat earlier Tuesday to attack Tel Aviv, as a barrage of rockets triggered air raid sirens in the city and across central Israel at about 9 p.m.

In Holon, south of Tel Aviv, a rocket reportedly hit a bus, injuring at least 6 people, one seriously, including a 5-year-old girl, a 50-year-old man, and a 30-year-old woman.

According to the United Hatzalah emergency service, they all sustained moderate or light-to-moderate injuries.

“I gave first aid to the victims, who had bruises and wounds. It seems they were injured by shrapnel and the blast. After giving them first aid, they were taken to the hospital as they were fully conscious,” a medic said.

Medics said they found a woman who was unconscious in Rishon LeTzion, who soon after passed away. They also were treating a man suffering an acute anxiety due to the rocket fire.

While they were treating the wounded in Holon, medics were forced to take cover when sirens signaled a fresh volley on the city.

“As we got close to the scene, we saw a bus and number of cars on fire. A woman in her 30s was lying on the ground, not moving. She was fully conscious and sustained shrapnel wounds to her upper body. We began treating her, giving her life-saving care, when another siren began,” the medic Regina Mizrahi said.

“We immediately ran with the patient, who was in a stretcher, to a safe place under a building. Once the sirens ended and we could leave, we returned to the road, put her in the ambulance and took her to the hospital in stable condition,” she said.

Eli Cohen, a spokesman for the fire and rescue units of the Southern District said that they were responding to a number of direct hits on buildings in Ashkelon and Sderot. Personnel were conducting searches for residents who may have been trapped in the damaged structures, and have shut off gas and electricity to avoid explosions.

Rockets were also reported to have landed in Rishon LeTzion, Ramat Gan outside of Tel Aviv, as well as in the Arab town of Taibe, police say. Sirens sounded in Netanya, as well.

The Gaza terrorists claimed that they had fired some 130 rockets at Tel Aviv, though that number has not yet been confirmed. The attack came just minutes after Hamas and Islamic Jihad vowed to respond to an Israeli air strike on a residential tower in the Strip earlier in the night.

Sirens and explosions could be heard throughout the area.

A second round of air raid sirens sounded in central Israel, east of Tel Aviv, including Ben Gurion Airport.

There are reports that Ben Gurion Airport has temporarily stopped air traffic due to the ongoing rocket attacks.

Air traffic is being rerouted to Cyprus, Channel 12 says.