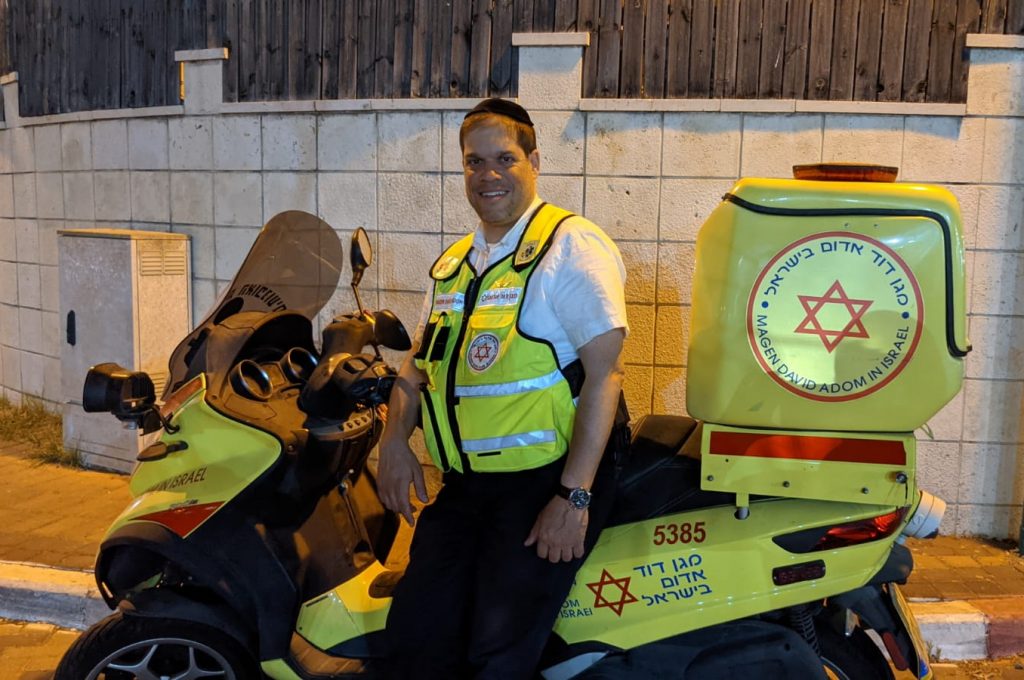 Since hundreds of thousands of people come to Meron for Lag BaOmer, many of our volunteers from around the country travel there and take shifts.

Suddenly, at 12:55 a.m., the calls came over the radio that said there had been some sort of collapse in the Toldos Aharon section and that there were 40 people injured. I didn’t hear it on my radio — the music was too loud — but another MDA volunteer grabbed me and told me to head over there.

At first we assumed that bleachers must have collapsed, but the bleachers looked fine. Nobody really knew what was happening, and the music was still playing. We continued walking and looking for an accident scene, and started walking down a ramp. We saw people waving us over. And then we saw it: a bunch of people lying on top of each other on the ramp. And we realized some of them were already dead.

It was pretty dark. I was holding the hands of a cop next to me. The metal ramp was very slippery from water.

Right next to me was a teenaged boy who asked me to help him. I saw there were four bodies on top his leg, which was broken.

The music was still blasting. People were still in back of me. Most people had no idea what had happened.

We tried screaming to the people on the ramp behind us to go back up, but they couldn’t because it was too crowded. It was absolute chaos. We had to lift the people off the top of the pile to get to those on the bottom. It was a horrific scene.

Then a few firefighters and policemen came over to the ramp to help.

On the side of the ramp was a small hachnasas orchim room that was pretty empty. I told the cops and firefighters to grab as many people as possible and put them into that room in order to ease the crowding on the ramp. They grabbed 12 people in all, until the room filled up. Of those 12, one person had minor injuries — and the other 11 were dead.

By this time, the staircase on the bottom of the ramp, where the tragic incident had occurred, was emptier because rescuers had pulled people off the staircase. So I told the firefighters to try moving people down toward the staircase.

Within a few minutes, rescuers had moved everyone off the ramp and staircase, besides for a few niftarim that were still on the ramp.

No CPR was done on the ramp or in the hachnasas orchim room. (The videos people have seen of CPR were done either on the bottom of the stairs or on a path nearby.)

We went back into the hachnasas orchim room and saw those 11 niftarim — young people who just a few minutes before were alive, dancing joyfully. It was heartbreaking.

One by one we double-checked the pulses and breathing, and it was hard to believe. There was nobody to treat.

I stayed in the room for 45 minutes — we had to keep everyone out. Nobody knew who anyone was; we didn’t want anyone to walk in and see a family member who had died.

Once a doctor or medic could officially declare each of those deaths, we called police, because only they are allowed to empty the pockets of the deceased to look for IDs. One emptied each pocket, while another catalogued whatever was in each pocket. I translated the English-language passports for the Israeli police officer.

At this point, one of the police chiefs came in and said that no niftarim could be taken out without the proper dignity — each one must be fully covered and carried by four people. We needed 11 stretchers, body bags and soldiers to help carry them.

One ambulance actually used up its roll of 25 body bags, and the ZAKA official there thought there must have been some mistake. Nobody could believe that more than 25 people had passed away.

As is well known now, cellphone service had collapsed in Meron. The speakers had frequent announcements like “Mr. So and So, your wife is trying to get in touch with you.”

The niftarim were first placed in a parking lot — that’s where the famous pictures seen worldwide were taken. Later, ZAKA, along with the Chief Rabbi of Police in the Northern Region, Rabbi Anshel Friedman (who is also a ZAKA volunteer), decided to have them transferred to a shul in Meron.

Even through this terrible tragedy, we saw many nissim. Here is just one: Every year, a group of Navy trainees stay in a village near Meron on Lag BaOmer, just to be available as backup in case they are needed. They are never needed. This year, for some reason, MDA invited them to stay in Meron, in the same building — the dorm of a Bnei Akiva building — that the MDA volunteers stay in. These non-religious soldiers had never experienced Meron on Lag BaOmer before. They greatly enjoyed the singing and dancing. And then, when the tragedy occurred, they certainly were needed, and they were right there to help us.

I directed them to walk all around the mountain with stretchers to look for any wounded people.
It was such a horrific night, which nobody will ever forget. I later met a neighbor who said he had been in the pile of people on the ramp and had screamed to me to save him. I had neither seen nor heard him, but baruch Hashem someone else had pulled him out of the pile.

Some of the Navy troops collapsed in trauma. First responder groups have had therapy meetings, but even for people like us who have been around tragedy their entire lives, this is unlike anything we have ever seen before.

We certainly don’t expect something like this to happen — on a day that is supposed to be a simchah.

The day had started so amazingly. I came up on a train full of frum people going up to Meron. It was such a joyful trip; people were eating and drinking and sharing l’chaim and singing. It was a wonderful time. Everyone was speaking with each other, friendly, like one big happy family.
One boy was sitting across from me on the train. We chatted for two hours. We became buddies on that trip and had a great time.

Later, when I saw the pictures of the niftarim, I realized that this young boy perished in the tragedy.