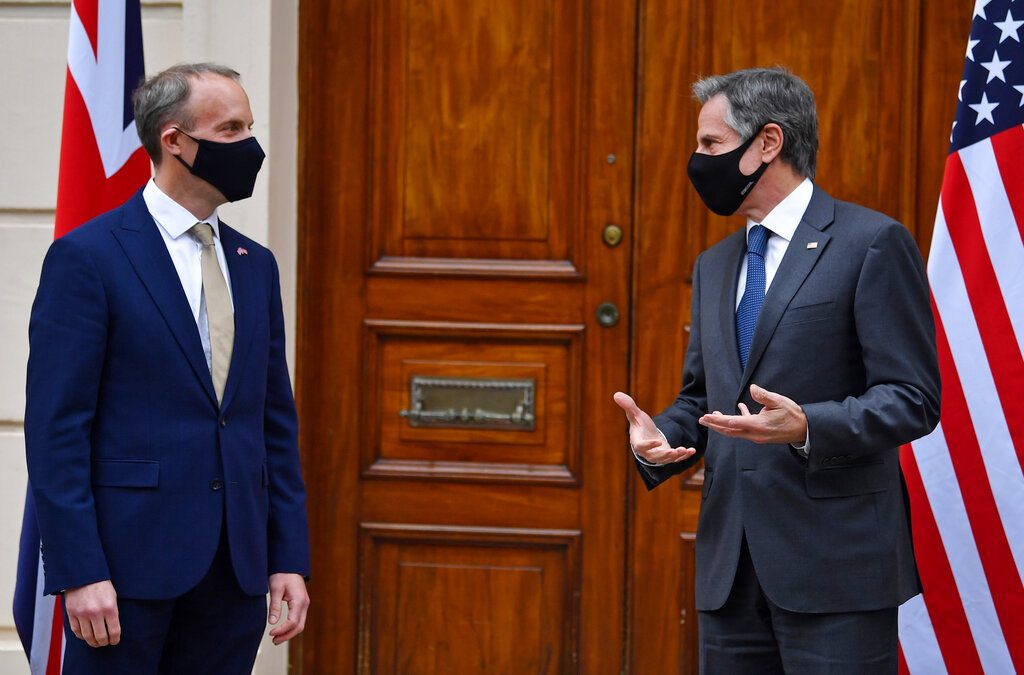 Iran is expected to be a key topic in talks Monday between U.S. Secretary of State Antony Blinken and his host in London, British Foreign Secretary Dominic Raab.

The two envoys donned face masks and fist-pumped before heading into the talks, a day ahead of the Group of Seven leading industrial nations’ first face-to-face discussions in two years, involving foreign and development ministers. The U.K. holds this year’s G-7 presidency.

Blinken’s visit to London, his first since being appointed by President Joe Biden, comes amid mounting speculation of a prisoner exchange deal with Iran. Prisoner exchanges are not uncommon and were a feature of the 2015 nuclear accord between Iran and the world’s leading powers. Biden has indicated he is looking to restart nuclear talks with Tehran after his predecessor, Donald Trump, pulled the U.S. out of the agreement.

In Britain, there’s particular interest in the well-being of a British-Iranian woman, Nazanin Zaghari-Ratcliffe, who was last week sentenced in Iran to an additional year in prison on charges of spreading “propaganda against the system.”

British Prime Minister Boris Johnson said his government is doing what it can amid reports in Iran that Britain would pay a 400 million-pound ($550 million) debt to secure Zaghari-Ratcliffe’s release.

“We, of course, make sure that we do everything we can to look after the interests of Nazanin and all the very difficult dual national cases we have in Tehran,” he said.

Earlier Monday, Blinken held bilateral talks with Japanese Foreign Minister Toshimitsu Motegi on an array of subjects including the coronavirus pandemic and the climate crisis, as well as raising concerns over North Korea’s nuclear and ballistic missile programs.

On Tuesday, the full G-7 — Canada, France, Germany, Italy, Japan, the U.K. and the U.S. — will meet along with representatives from other countries, including Australia, India and South Africa.

Ahead of the gathering, German Foreign Minister Heiko Maas warned that “authoritarian states” around the world are “trying to play us against each other” and that breaches of international law have become commonplace.

“It is important that we hold our values of democracy, state of law, human rights and a global order based on rules against them, united and credibly,” he said.