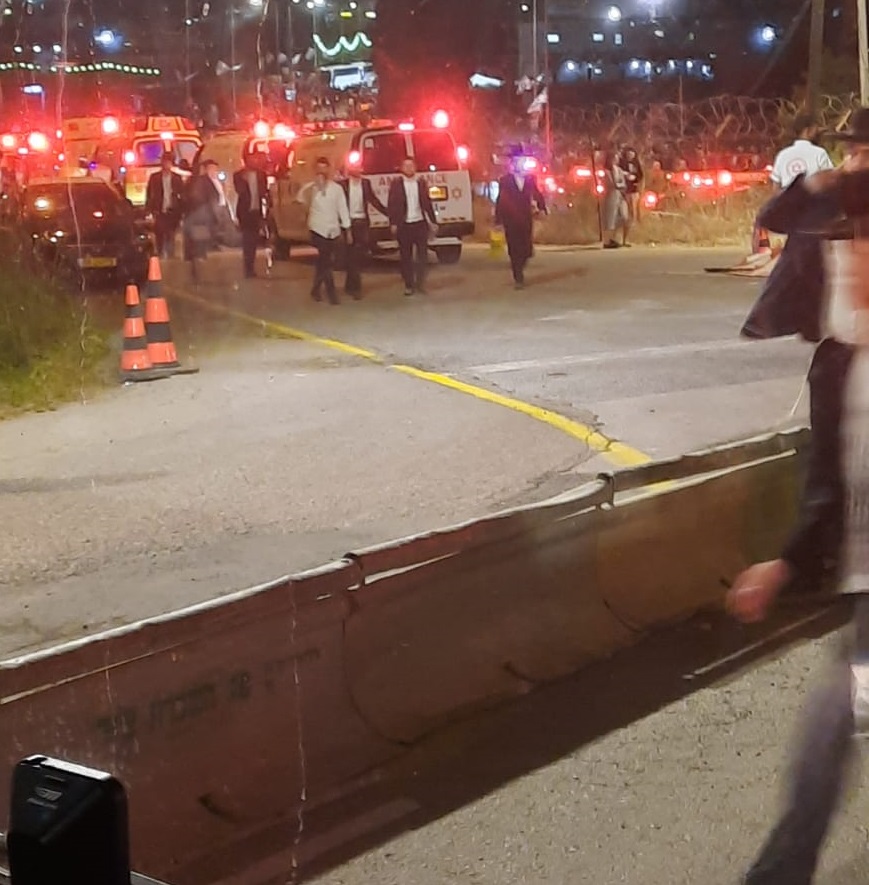 We went up the Mehadrin Road, and then went up a staircase. At the top of the staircase is a Hatzalah tent. We saw Hatzalah bring an injured person toward the tent — just a typical injury, someone who had fainted. But then suddenly Hatzalah brought another stretcher toward the tent and we hear a yell, “CPR now!” They were just a few feet from the tent, but did not even wait to bring him inside the tent. They put the injured person down right there and began CPR.

I started trying to clear the area to give Hatzalah some room to do their work. And suddenly we see them bring them three or four more people there, and begin CPR on them.

Then a few police officers came, and it seemed like the situation was under control. I did not know anything about what had occurred. So I left that area and went toward the kever, but was very shaken by what I had seen.

As I moved toward the kever, I heard music playing. Then they stopped the music, said a kapitel Tehillim, and the music resumed with the song, “Avinu Malkeinu, psach shaarei shamayim letefiloseinu.”

But I was still so shaken by what I had seen near the Hatzalah tent that I was unable to dance.

I turned back to go down, and by that time, it was obvious that something serious had occurred. I asked a police officer if there he was any way I could help, but he replied, “Just go down.”

There are two lanes in which you can walk. One lane was taken up by emergency personnel transporting people on stretchers toward the area where the ambulances are, one or two kilometers down the mountain, and then rushing back with the empty stretchers to transport more injured people. I started helping them to carry the injured, and also clearing people walking from the mountain, to keep them out of the lane needed by emergency responders. There must have been 100,000 people on Mt. Meron at that time.

I helped build a chain of people clearing the lane needed by emergency responders.

After an hour, as the crowd thinned and it seemed that the emergency responders had cleared the injured, I caught a bus back to Tzfas.

This was a night that I, and Jews all around the world, will never forget.