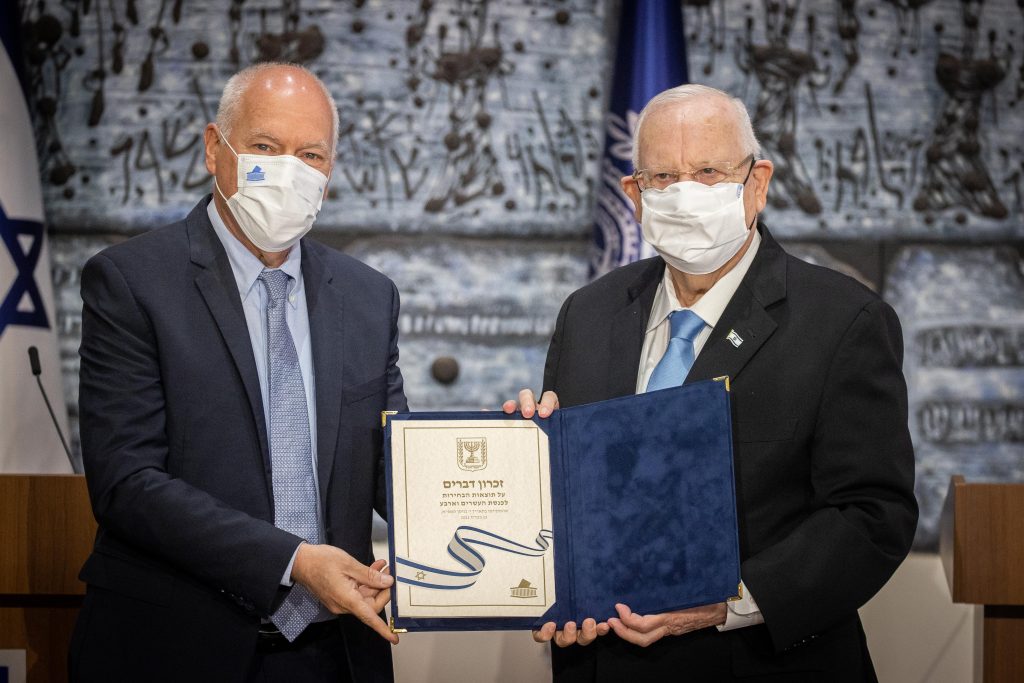 President Reuven Rivlin on Wednesday received the official results of the elections to the 24th Knesset from chairman of the Central Elections Committee Judge Uzi Fogelman, in an official ceremony at Beit HaNasi.

“I have not yet completed seven years of my term as president, and yet this is the fifth time I am receiving results of elections to the Knesset, and the fourth time in less than two years,” said Rivlin.

“There is no need to elaborate on the complicated situation that Israeli society and politics find themselves in, but we must not forget that elections to the Knesset are a prime example of our statehood, the ‘holy of holies’ of our democracy. This is the clearest way the public can make its voice heard and elect its representatives. And, for that reason, we must not take this moment lightly.

“You, members of the Central Elections Committee, headed by chairman Judge Uzi Fogelman and CEO Orly Ades, have been required to work in an extraordinary way. In a short time-frame, and in the eye of the unprecedented health crisis, you succeeded in setting up an election system that was accessible to those in isolation, the sick, citizens at risk and afraid – and rightly so – of exposure to the deadly virus. Moreover, you worked in climate of tension and suspicion, at home and abroad, that threatens to cast doubt on the professionalism of the gate-keepers, including yourselves, who are entrusted with ensuring clean elections and giving official validity to their results.”

“You, dear friends of the committee, carried out your sacred work with professionalism, seriousness, with a true and genuine sense of mission, on behalf of the Israeli people and the laws of the Jewish and democratic State of Israel. We, the citizens of the State of Israel, can only thank you for your faithful service and willingly accept the results that you are presenting here today as the official results of the elections to the 24th Knesset, as the voice of the Israeli people.”

“In the days ahead, as I am required according to Basic Law: The Government, I will receive here at Beit HaNasi representatives of the parties elected to the Knesset, and I will consider who is the candidate with the best chance of forming a government.

“Israeli society needs a government that will pass a budget, that will lead a process where the symptoms and the citizens who have been harmed are made better, and where the institutions of the state are rescued from the political stalemate that we found ourselves in precisely at the time when Israel’s citizens need them more than ever.

“The political crisis that is shaking us is harming and weakening our democracy to a certain extent, but it will not beat us. We are stronger than it. Israeli society is stronger than it. I truly hope that the elected officials, representatives of the public, are able to hear the Israeli people and their call for out-of-the-ordinary coalitions, collaborations that cross sectors, working in a serious and dedicated way for the good of all of Israel’s citizens. That is what we will look at in the forthcoming consultations that will be held here, in this house, in the near future. Thank you, and moadim lesimchah to you, your families and to all Israel. Bless you.”

Next Monday, Rivlin will meet with representatives of all elected parties to hear whom they recommend be given the mandate to form the next government.

The following day, the new Knesset’s members will be sworn into office.

Rivlin will announce on Wednesday who will be given the mandate to form the next government.

Based on Rivlin’s saying that his consideration in picking a candidate would be their “chance of forming a government that will win the Knesset’s endorsement” gives a possible indication that he won’t necessarily pick the MK with the most recommendations.

Senior Likud MKs responded to Rivlin’s remarks, saying in a joint statement that “the president does not determine the results of the election! He must not be a political actor.”

“Since the formation of the state, all presidents of Israel gave the first opportunity to form a government to the candidate who received the most number of recommendations — and that’s how it needs to be this time, too,” Knesset Speaker Yariv Levin, Energy Minister Yuval Steinitz and Public Security Minister Amir Ohana said.