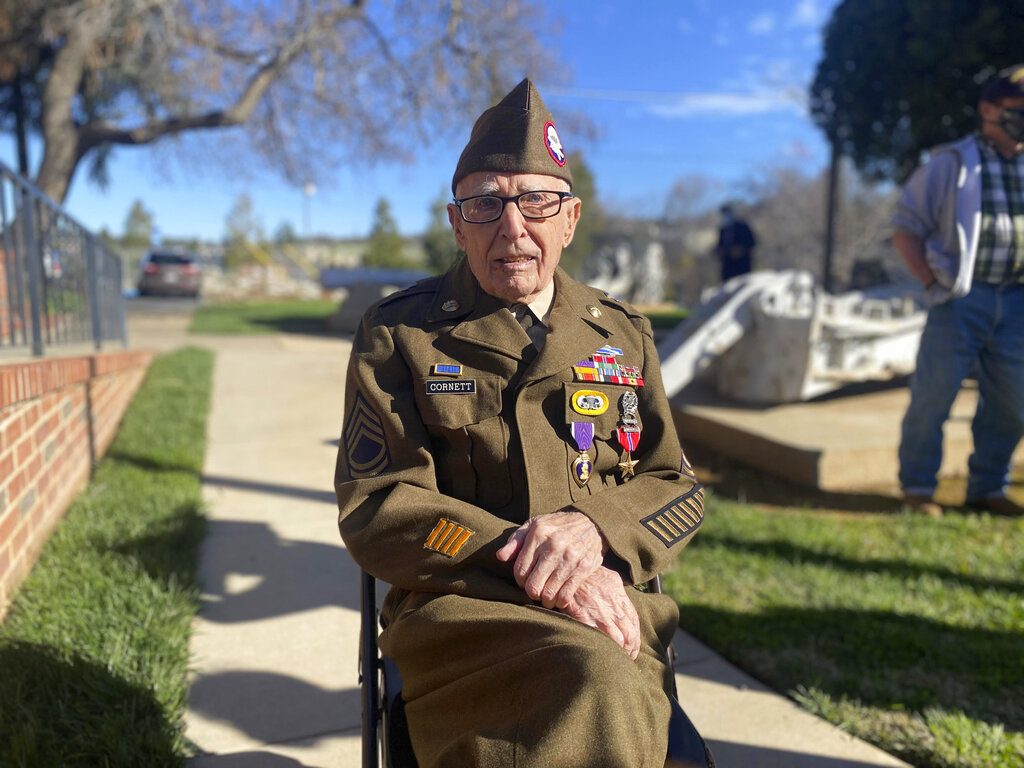 Seventy-seven years after a German mortar wounded him as he fought along the Mussolini Canal in Italy, U.S. Army Sgt. First Class Marvin Cornett stood proudly in a pristine uniform, this time adorned with a Purple Heart and Bronze Star.

Cornett’s daughter, Jan Mendoza, proudly watched as two uniformed men a quarter of Cornett’s age pinned the medals on his chest during a small ceremony in California earlier this month.

She also breathed a sigh of relief. Her father is 99, and obtaining this long overdue honor for him felt like a race against time. Hundreds of members of the Greatest Generation die each day, along with their stories of heroism.

“Thank you for the incredible example you’ve given all of us,” Maj. General Chris Donahue told Cornett on a video chat during the ceremony. “We can never thank you enough.”

Donahue serves as the commanding general of the 82nd Airborne Division at Fort Bragg, North Carolina, the storied Army unit to which Cornett belonged when he jumped out of airplanes and engaged in combat.

The 82nd, which played a pivotal role in the Normandy invasion and retains a proud focus on its history, wanted to make things right as soon as it learned about Cornett and his missing medals.

Bill Linn had been working to do just that for months. His company, Heritage Arsenal, which specializes in military museum and memorabilia consulting, was contacted by Cornett’s two daughters last year. They were determined to get their father the awards he deserved.

The group gathered the needed paperwork and submitted it to the Army, hoping Cornett’s Purple Heart and Bronze Star would follow. Instead, they received a denial letter.

But Linn, a retired Army lieutenant colonel, had one more hand to play. On Nov. 17, he reached out to a former West Point classmate now serving in the command staff of the 82nd. Eight days later, Cornett’s medals were approved by then-Army Secretary Ryan McCarthy.

In the small audience sat Marvin Cornett, his children, grandchildren and great-grandchildren. The uniform he wore, seemingly frozen in time, was impeccably assembled by his daughters. He’d held on to much of it throughout the years but Mendoza had to hunt down some of the missing pieces. His shining jump boots were purchased on eBay.

Growing up, Mendoza didn’t hear her dad say much about his experiences in the second World War, even though his Army career continued long after. After he was injured, he was stationed at Fort Benning, Georgia, where he served as a parachute instructor. He later became an Army recruiter and retired as a sergeant first class.

When she’d ask her dad what he did in the war, he’d reply, “Jumped out of airplanes” and quickly move on.

But in 2007, Mendoza gave him a voice recorder and his battle stories began to flow into it. He only told them while he was alone.

“It was almost like he just unloaded,” she said. “And I heard all of the stories, the nitty-gritty details of his combat in World War II, the circumstances surrounding his injury and all of these things that I never, ever heard before.”

After receiving his medals, Cornett turned toward the small crowd and rendered an unassuming salute as local TV cameras captured the moment.

Linn believes the quiet humility that Cornett displayed at the ceremony is inherent to his generation: Those who helped liberate the free world from Nazi tyranny tucked their heroic stories away and returned home, seeking quiet American lives, not fanfare and attention.

“They don’t believe they are entitled to really anything,” Linn said. “You have a lot of people who are preoccupied with what the world owes them. … I see an absence of that in the Greatest Generation.”