New York Bill Would Require Producers to Recycle Their Own Products 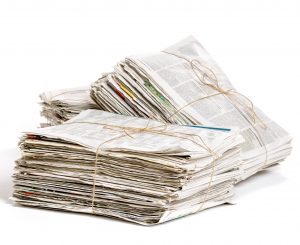 A bill making its way through the New York state Legislature would make producers of recyclable products responsible for their recycling the items they put into circulation.

The Extended Producer Responsibility Act shifts the burden of recycling from municipalities to private companies, requiring “producers” of recyclable goods to arrange for the recycling of their own products. This includes paper products such as newspapers, magazines and brochures; flexible foam; cartons; plastics; glass; and metal. Exceptions apply for certain beverage containers and for books or other goods intended for long-term use. “Producers” are defined as those who manufacture, sell or import the products in New York, with exceptions for businesses that generate less than $1 million in annual revenue or generate less than a ton of recyclable material annually, those that operate “as a single point of retail sale and is not supplied or operated as part of a franchise,” and for “retailers that are not producers.”

Michelle Rea, executive director of the New York Press Association, which represents over 721 community and local newspapers, told Hamodia that the bill’s inclusion of newspapers and magazines “amounts to a tax on the First Amendment” and is “a body blow that newspapers can’t absorb.”

“Journalism is under attack, and we can’t afford for them to burden us with additional costs in recycling at that this point in time,” said Rea. “Newspapers are a public service, and we deliver essential information to local communities — information that isn’t available from any other source. And our status in our democracy is certainly far more important than that of a plastic drinking straw or a water bottle. The fact that this legislation lumps newspapers and magazines with products like plastic bottles and paper cups is not acceptable.”

Rea said she “applauds efforts to keep plastic and other packaging material that are not biodegradable out of our waterways,” but “when is the last time you saw a newspaper floating in the Hudson River?”

Rea believes recycling should remain the responsibility of municipalities. “They take our trash away. Are newspapers going to have to start taking their own trash away? That’s part of municipalities’ role – you clear the snow, you pick up garbage, and you take recycling away.”

The bill (S1185) passed the Senate Environmental Conservation Committee early last month. Its lead sponsor is Nassau County Democratic Sen. Todd Kaminsky, who chairs the committee, and it has 23 additional co-sponsors, all Democrats. A companion bill (A5801) was introduced in the Assembly by Suffolk County Democrat Steve Englebright, who chairs the same committee in the lower chamber; it has four co-sponsors, all Democrats.

In an interview with Hamodia, Englebright said that his primary focus is on plastics, and incentivizing companies that produce various types plastic containers, which cannot be recycled together, to standardize their products.

“The lack of standardization is one of the problems that this bill is intended to expose and highlight, and hopefully correct,” the Assemblyman said. “There will be pressure on the industry to use one recyclable plastic.”

As to Rea’s comments that the bill amounted to a tax on the First Amendment, Englebright said “I think that’s an exaggeration,” but that “it is certainly a problem if it really damages our press. I don’t have insensitivity to that concern.”

Pressed on specifics as to how the bill would practically be enacted, Englebright said “it’s a study bill right now” and that he would like to take time to speak with stakeholders and refine the legislation, “to come up with a bill that’s realistic and workable and effective.”

Englebright said that while the bill has to be refined, there are consequences to not passing any bill. “We have one large landfill left on Long Island that is still operational, in Brookhaven, scheduled to close in two to three years. Then what? We need to extend the useful life of our existing landfills, and we need to do it now. We needed to do it yesterday.”

“We’re going to be working toward perfecting it doing as much as possible, to inspire people who are manufacturers to standardize their operations and coordinate,” the Assemblyman said.

“It’s going to take a little time,” he said, and “I welcome constructive input.”