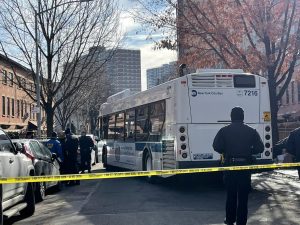 A tragic accident occurred Wednesday morning in Williamsburg, when a young boy was apparently hit and killed by the school bus he was waiting for.

The incident occurred around 8:30 a.m., on Hooper Street and South 5th Street, when 6-year-old Shimon Fried was waiting for the school bus with his brother. The brother made it onto the school bus but Shimon didn’t. An MTA bus driver subsequently saw Shimon lying on the ground and phoned emergency responders. A source familiar with the investigation told Hamodia it is believed that Shimon had been accidentally struck by the school bus.

Misaskim and Chesed Shel Emes were on the scene to ensure kavod hameis.