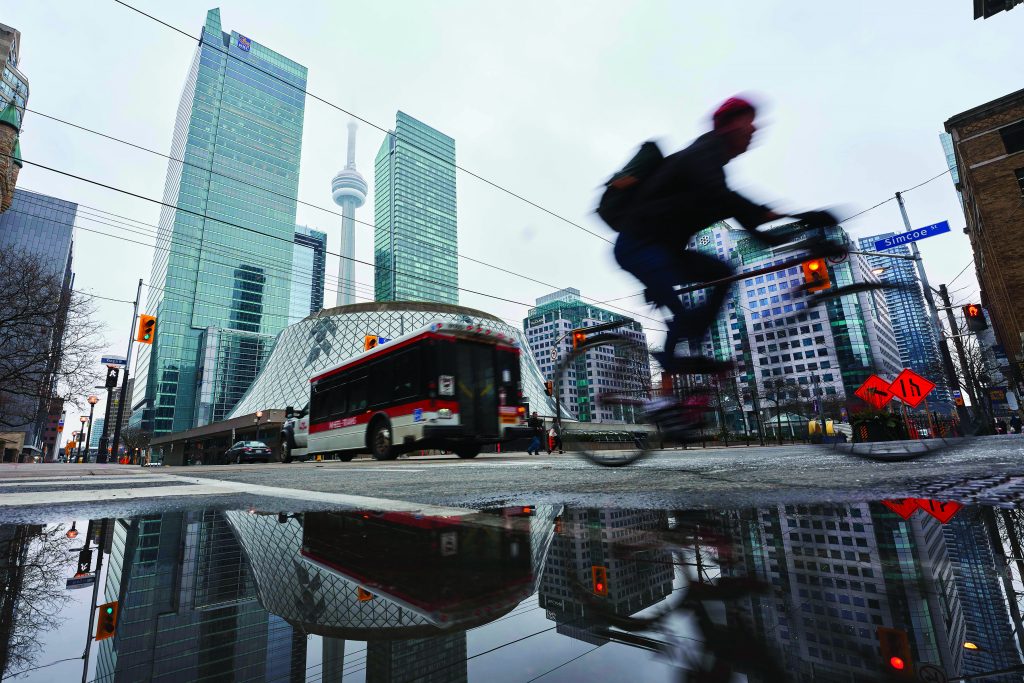 Perhaps it’s not surprising that, here in Toronto, we are lumbering along under prolonged lockdowns that have basically dogged us since last March in some form or another. It’s been a long year.

And perhaps it’s not surprising that even with our conservative provincial authorities (comparable to state power), the modus operandi of this government is to lock down, and then lock down harder. A liberal leadership might have only done it quicker and with more confidence, but these old political factions seem to be in near lockstep over COVID.

Shops and businesses have been shuttered for months. Feeble attempts at curbside pickups for operations that can manage it have been made, but the streets are quite empty and, with the exception of the big box stores like Walmart and Costco, where people descend for their occasional outings, there is a sense of eerie quiet and abandonment in the city streets.

Government is a blunt instrument, so many sweeping policies have been enacted like the boarding up of drive-through entertainment centers where customers purchase tickets online and have zero contact with each other or establishment workers. Ski hills and outdoor activities that might have given people relief have been uniformly shut down, and even park sledders have been shamed by some media outlets for gathering in small groups for this outdoor activity, where research has long shown that transmission is incredibly improbable.

School has been closed now for months, with the opening date repeatedly pushed off, despite the World Health Organization’s assurance that schools should remain open and Toronto’s Sick Kids Hospital echoing the same. Ontarians have been under stay-at-home orders with allowances for only essential outings like grocery shopping. Presumably people can be stopped and questioned by authorities if their activities appear unessential.

Prayer groups are allowed for groups of 10 or fewer, but controversy abounds regarding whether that means 10 per room or 10 per building, since in COVID days precisionist arguments such as these take up much headspace.

And now there are the newly announced travel restrictions, ones that span all of Canada and which have canceled all flights to the Caribbean and have imposed new obligations on Canadian travelers coming from the United States. For citizens returning to their own country, they will now need to demonstrate a negative test before boarding a flight home, then take a new test upon arrival, quarantine at a government-approved hotel for a few days at their own expense (which authorities have warned will likely be $2,000 Canadian), and then, upon receiving results from that test — assuming it is negative — complete their 14-day quarantine at home. Those with a positive result will be escorted to a government facility for the remainder of their illness. CBC reported that only 1.8% of COVID-19 cases can be traced to travelers, but that piece of data seems to have fallen by the wayside.

And finally, there are all the little things, less reported but deeply disturbing: the threats and intimidation by border agents, the $1 million fines for breaking quarantine, the following and questioning of a little girl by the police because she was carrying schoolbooks during stay-at-home orders, the busting of small extended family gatherings by bylaw officers with tickets for all involved, and the media and social media eagerness to uncover naughty “rule-breakers.”

Perhaps what is most staggering is the nonexistent pushback. Authorities, media and citizenry seem to be wholeheartedly committed to restrictive lockdown measures or at least ignorantly compliant.

True, this is Canada. This country does not have the same history or steadfast commitment to individual liberties as the U.S. But Canada is a nation much like other developed nations, with perhaps a less fierce and somewhat more vague belief in freedom, but a belief nonetheless. How then did this concentrated docility and acceptance of onerous impositions grip a seemingly free people?

Perhaps Canadian measures will be affirmed in the end. Nothing will be known for years to come. The dangers of COVID are still mostly unknown. At this adolescent stage of the pandemic, we can only begin to speculate as to the long-term ramifications of this strange and oddly manifested disease. The fallout from COVID, including any residual effects, is still long in the studying. The long-term possible adverse side effects of the vaccine are still mostly unknown. They may be dramatic; they may, G-d willing, be mild and insignificant. And the dangers of lockdowns are still mostly unknown, although as a global population we are beginning to glean their devastation. Therefore, none of these approaches can be embraced with any certainty.

Yet one thing is certain. It is with staggering swiftness that people can relinquish some of their most fundamental and dearly cherished rights. It is with awe that many of us look around at the current political and social landscape, observing a disintegration we never thought we would witness in our lifetimes, or at least not this rapidly. People seem completely content to relinquish their freedom of movement, of assembly, of privacy, of education, of decision-making, and even to turn informer on each other, all in service of this lofty mission — battling COVID. And at the core of it is the cultivation of fear.

As in George Orwell’s book 1984, when a whole society was subdued because of a non-existent war which Big Brother was supposedly keeping the citizenry safe from, here in Canada it has been easy, far too easy, to convince a disparate and free-minded people to embrace government overreach, dictatorial proclamations and draconian regulation. Perhaps the most astonishing part is how the dictators here pulled no coups. They wrestled no opponents, overcame no strongmen. In fact, they have been invited to don their laurel wreaths by a citizenry so paralyzed and confused it seems nearly eager, desirous, even desperate, to be dictated.