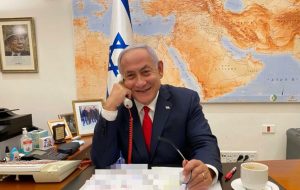 “The conversation was very friendly and warm and lasted about an hour. The two leaders noted their longstanding personal ties and said they would work together to further strengthen the strong relations between Israel and the United States,” the statement said.

“President Biden and Prime Minister Netanyahu discussed further advancing peace agreements, the Iranian threat and the region’s challenges and agreed to continue talks between them. The president also congratulated the prime minister on his leadership in the fight against coronavirus and the two exchanged views on how to deal with the pandemic.”

Journalists and politicians had been speculating as to why the president had not called, after speaking with the leaders of a number of other countries.

On Tuesday, White House Press Secretary Jen Psaki said that Netanyahu would be the first in the Middle East to receive a call from Biden, “soon.”