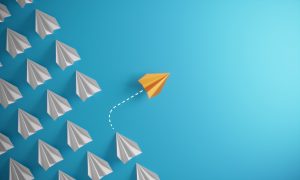 The image on the cover of Prime newsmagazine generally reflects the most important or compelling feature inside that issue. This in turn may cause some readers to wonder why we present the Torah perspective of two esteemed Rabbanim and Jewish leaders in an issue dedicated in large part to reflecting on an outgoing President.

The short answer is that, after speaking in recent days to many individuals in numerous cities across America and beyond, it has become obvious that, tragically, we have lost our way. A stunningly large segment of our community reads, breathes, and lives social media. From the moment they get up in the morning until they fall asleep, their eyes and thumbs are constantly returning to their handheld devices, and they swallow whatever appears on the screen as the absolute, undeniable truth.

In the process, they have lost their sense of direction which not only shapes their own lives and their children, but they also fail to recognize how this phenomenon is perceived in the eyes of the youth. As a result of this entanglement with and addiction to social media, a sense of confusion and desperation has gripped large parts of our community.

What is going to be? they fret. Until now we had a President who did so much for us and from time to time presented us with pleasant surprises, and he did not stop doing so until his very last opportunity in office. Now that he lost, who knows what the future holds for us?

With such thoughts percolating in our minds, it may be very hard to accept and adjust to reality. The imminent transition from a President who was singularly devoted to the Jewish community and the effects of the pandemic are wreaking havoc on our common sense and our basic hashkafic principles.

This is the reason we bring to you the ideas so thoughtfully articulated by the Rosh Yeshivah Harav Elya Brudny, shlita, and Dayan Harav Chaim Kohn, shlita.

It is time for us to go back to school and learn the alef-beis, the fundamental approach to how Torah Jews should view politics.

One of the more disturbing claims being parroted in some circles is that “We must act and make ourselves be heard, otherwise we will go back to Europe in the 1930s.”

This assertion underscores their ignorance of what really happened in the 1930s. All they know is that whatever occurred back then was followed by the Churban Europa, and they claim to be seeking to prepare themselves before a new Churban is, chas v’shalom, coming. This too is based on a profound lack of knowledge and understanding.

This is a delicate topic that could be elaborated on and examined in various different angles. Yet, in short, history taught us that what stood behind survival was not preparation or the lack of it. Our survival was based only on the Ribbono shel Olam’s plan regarding each individual survivor.

So much of what is being said and thought in response to the recent occurrences in Washington illustrates that we have forgotten what to learn and from whom to learn. On one hand we attack the media bias, on the other we allow it to lead us.

Have we stopped thinking on our own and are we instead being led blindly by what we read? How involved should a Jew in galus be in the political developments of his host country? Where is the demarcation between expressing gratitude and hero worship, and have we crossed this line? Did the President, whom we may respect very much, become our leader in place of our Gedolim? Many may have perceived that he did good things for us and, instead of expressing hakaras hatov for the good things, bought into every tweet and accepted every statement as emes. They visibly joined the chorus of “these leaders can do no wrong.” How did we fall for all this?

These and other burning questions are answered in the daas Torah presented in these pages. We trust that even those who are glued to social media will be able to tear themselves away long enough to read this editorial and grow from the illuminating and profound Torah insights in the coming pages. For all those readers who seek the truth, we invite you to learn from a pristine Torah hashkafah that throughout the generations has repeatedly proven to be the only appropriate path.

We welcome your questions or comments.