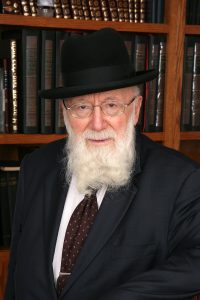 Rav Schwartz was born and raised in Newark, New Jersey. He graduated Yeshiva College and the Rabbi Isaac Elchanan Theological Seminary of Yeshiva University, where he received his semichah. He served as the rabbi of the Young Israel of Boro Park for 18 years, and held pulpits in Rhode Island, New Jersey and Pennsylvania.

He was a recognized leader of American Jewry, whose psak halachah and wise counsel were widely sought.

In addition to his rabbinical positions, he was the editor of Hadarom, a well-known Torah journal, and authored 3 sefarim: Divrei Regesh, Migdanos Eliezer and Shaarei Gedulah.

A statement by the Orthodox Union extolled Rav Schwartz’s encyclopedic knowledge of Torah literature. He was an incredibly compassionate and sensitive person, whose impeccable middos and warm demeanor made him approachable to all. He will be missed deeply by his family, by his Chicago Jewish community, and by all of American and world Jewry.

The levayah was held Thursday morning in Chicago.

He is survived by his two sons: R’ Avraham Yeshaya and R’ Chaim; his daughter, Mrs. Rivka Leah Goldman; and grandchildren.