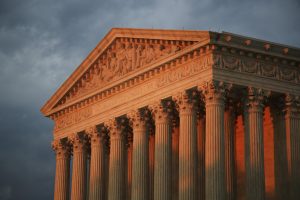 The Supreme Court considered whether to uphold rulings that would allow heirs to property stolen by the Nazis to have their cases heard in American courts. In addition to ruling on two long-litigated cases, the decision could have broad repercussions for Holocaust restitution in general, as it could give claimants an additional recourse to pressure recalcitrant owners and countries on claims.

The case that received most of the Justice’s attention was brought by heirs of owners of a multi-million-dollar art trove, known as the Guelph Treasure or Welfenschatz, against the German government. After a German commission dismissed a claim that the works had been sold under duress from the Nazi regime, the claimants took their case to U.S. courts.

Lawyers for the Prussian Cultural Heritage Foundation, which oversees Berlin’s Bode Museum, where the collection is on display, have argued that the doctrine of “sovereign immunity” protects them from litigation in a foreign legal system.

The case is joined with another years-old battle of a group of descendants of a Hungarian Holocaust survivor against the Hungarian government over property that was seized during and after the Second World War.

In nearly three hours of oral arguments held via telephone due to the COVID pandemic, Justices had hard questions for both sides, voicing concern over the multi-fold complications of allowing too wide of an exception for foreign powers to be sued in U.S. courts, but also showing frustration over the lack of remedy that stopping the cases would afford the plaintiffs.

“Given the nature of international relations it’s easy to envision cases where it would seem particularly inappropriate for United States courts to get involved in litigation,” Chief Justice John Roberts said at one point. But he went on to ask whether, even if courts weren’t normally involved in such cases, it might still be “appropriate in particularly sensitive international relations cases.”

At issue is the scope of the Foreign Sovereign Immunities Act of 1976 (FSIA), a law designed to keep disputes with foreign governments out of U.S. courts.

In 2017, the United States District Court for the District of Columbia ruled that the group claiming the Guelph Treasure could pursue their claims in American courts, saying that the FSIA does not apply since the property in question was seized as part of a genocidal plan against the Jewish People, hence covered by an exception for matters linked to violations of human rights and international law.

The ruling has been appealed by the German government, which argues that such an exception does not apply to actions taken by a country against its own citizens, which the plaintiff’s ancestors were at the time the treasure was transferred to the Nazis. Germany’s claim is being supported by the U.S. government, which argues that opening too wide a loophole in FSIA could create impasses to foreign policy.

Beyond the cases in question, the prospect of the descendants of Holocaust survivors being able to advance claims against foreign nations could begin a new era in attempts to reclaim property seized by Nazis and their collaborators and later re-appropriated. This could be especially true for those who have attempted such claims in nations like Poland, which has long gained a bad reputation for the impasses its legal system presents to restoring property to the heirs of its pre-war owners.

Germany and Hungary argue that federal judges can apply the principle of “comity” in FSIA cases and decline to hear cases better suited to being resolved in another nation. Several justices, however, suggested that could be problematic.

“I mean there are almost 700 district judges. You want every one of them to assess whether a particular lawsuit raises foreign relations concerns?” Justice Samuel Alito said. Justice Neil Gorsuch suggested the approach could produce “bedlam.”

The Justice Department has backed Germany, urging the court to dismiss the case. The administration has also backed Hungary, urging the justices to return the case to a lower court to determine whether American courts should refrain from weighing in on this particular dispute.

“The issue of foreign relations tension is exactly what the FSIA was intended to [address], [it was] the judgment of Congress that in these designated circumstances, those tensions should not lead to immunity.”

A decision in both cases is expected before the end of June.