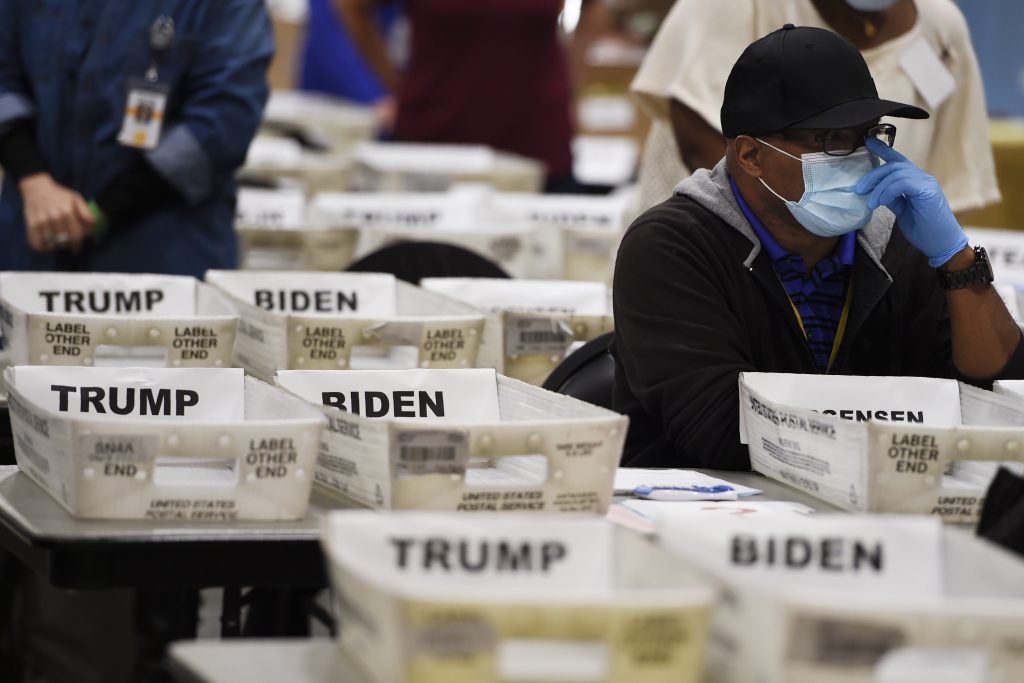 Masked election workers in teams of two began counting ballots Friday in counties across Georgia, a hand tally of the presidential race that stems from an audit required by a new state law.

The law requires that one race be audited to check that new election machines counted the ballots accurately, not because of any suspected problems with the results. Secretary of State Brad Raffensperger chose to audit the presidential race and said the tight margin — Democrat Joe Biden leads Republican President Donald Trump by roughly 14,000 votes — meant a full hand count was necessary.

Across the state, audit teams worked with batches of paper ballots, dividing them into piles for each candidate, before counting each pile by hand. Bipartisan panels were on hand to review certain ballots, including those where the auditors couldn’t agree on the voter’s intent and those with write-in candidates.

Monitors, appointed by local Democratic and Republican parties, were allowed to circulate among the auditing stations but could not touch ballots or record anything. News media and members of the public were also allowed to observe but were required to do so from a designated area.

In Cobb County, in Atlanta’s suburbs, several dozen audit teams sat at tables in a large room at an event center in Marietta as they began counting absentee ballots. One auditor picked up a ballot, read the candidate’s name aloud and then passed it to the other auditor, who also said the name before placing the ballot in a tray marked with the candidate’s name.

As they worked, the room was quiet aside from the shuffling of papers and auditors saying “Trump” or “Biden.”

A similar scene occurred across Georgia’s 159 counties as the count of nearly 5 million votes got underway.

Some counties used Friday to set up before beginning their counts Saturday.

In Fulton County, the state’s most populous, a 110,000-square-foot space at the Georgia World Congress Center in downtown Atlanta was being prepared for 125 two-person teams, elections director Rick Barron said during a video news conference.

The county has 528,777 ballots to be recounted, Barron said, adding that he estimates it will take the teams two or three days to finish if they work from 7 a.m. to 5 p.m. daily.

The county elections department has been hard hit by the coronavirus. Two people in the absentee ballot section were infected in the spring, before the primary election, including one who died. An additional 26 workers in a warehouse where election equipment is prepared and supplies are stored tested positive last month.

That was on their mind as they planned the space for the audit, Barron said.

The secretary of state’s office has instructed county election officials to complete the audit by 11:59 p.m. Wednesday. The deadline for the state to certify the results is Nov. 20.

The audit is part of a 2019 law that also set out guidelines for the purchase of a new $100 million election system from Dominion Voting Systems. It was up to the secretary of state to choose the race and Raffensperger said the presidential race made the most sense because of its tight margin and national significance.

The final numbers in the audit count will almost certainly differ from the numbers previously reported by the counties, but the overall outcome should remain the same, said Gabriel Sterling, who oversaw the implementation of the state’s new voting system for the secretary of state’s office.

The results will not be released piecemeal as the counties finish counting but will be announced once the full tally is complete, he said, adding that the result of the audit is what will be certified.

The AP has not declared a winner in Georgia, where Biden leads Trump by 0.3 percentage points. There is no mandatory recount law in Georgia, but state law provides that option to a trailing candidate if the margin is less than 0.5 percentage points. It is AP’s practice not to call a race that is – or is likely to become – subject to a recount.

Once the results from the audit are certified, the losing campaign can request that recount, which will be done using scanners that read and tally the votes, Raffensperger said.