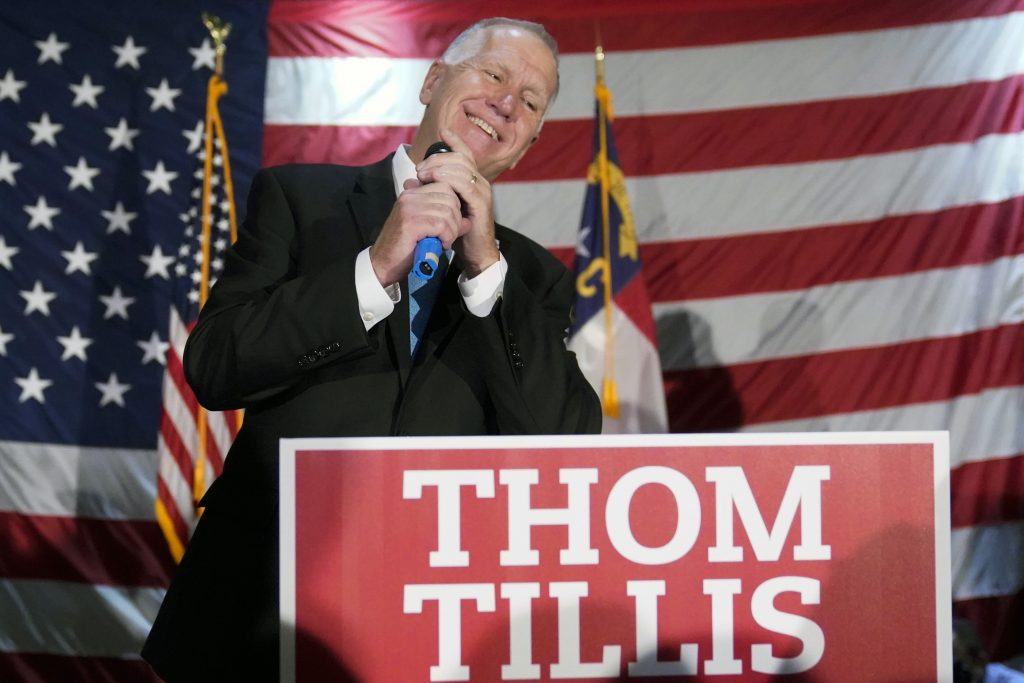 Democrat Cal Cunningham conceded to incumbent Republican U.S. Sen. Thom Tillis in North Carolina on Tuesday, saying “the voters have spoken” and it was clear Tillis had won.

With Cunningham’s concession, all eyes turned to Georgia, where two U.S. Senate runoff races in January are likely to determine the balance of the upper chamber.

With votes still uncounted and the races in North Carolina and Alaska still too early to call Tuesday, the Senate remained tied 48-48. Alaska GOP Sen. Dan Sullivan is favored for another term against Al Gross, an independent running as a Democrat. If the Senate ended up tied 50-50, Democratic Vice President-elect Kamala Harris would wield the tiebreaking vote.

Georgia is closely divided, with Democrats making gains on Republicans, fueled by a surge of new voters. But no Democrat has been elected U.S. senator in 20 years.

In North Carolina, Tillis led Cunningham by 94,500 votes, from among more than 5.4 million votes counted so far. Additional absentee and provisional ballots are being counted. Counties finalize their results on Friday.

“I just called Sen. Tillis to congratulate him on winning reelection to a second term in the U.S. Senate and wished him and his family the best in their continued service in the months and years ahead,” Cunningham said. “The voters have spoken and I respect their decision.”

Cunningham accepted defeat after outraising Tillis during what became the most expensive U.S. Senate race in history. All together, the two campaigns and outside groups spent $282 million on the general election, according to the Center for Responsive Politics.

Tillis, 60, a former IBM consultant and state House speaker from the Charlotte suburbs, was one of President Donald Trump’s strongest defenders during impeachment but was criticized by the GOP base last year when he initially took a stance opposite the president on how to fund the border wall. Tillis later changed his mind on the issue.

“This was a hard-fought campaign and I wish nothing but the best to Cal and his family going forward,” Tillis said in a statement. “I am incredibly humbled by the chance to serve the people of North Carolina in the United States Senate for six more years and I pledge to continue keeping my promises and delivering results.”

The race in the presidential battleground state was already being closely watched before word of Tillis’ coronavirus diagnosis upended it in early October.

Tillis tested positive for COVID-19 several days after attending a White House event announcing the nomination of Amy Coney Barrett to the Supreme Court. Unlike most people at the event, Tillis wore a face mask, but he took it off once indoors. Many attendees — including Trump — later tested positive.

Tillis campaigned on a record of passing Trump’s 2017 tax cuts, confirming conservative judges and helping the country recover from the pandemic. Cunningham, 47, is a Raleigh attorney and U.S. Army Reserve officer.

It was also still too early to call North Carolina’s presidential race and several other statewide races. Trump led President-elect Joe Biden by more than 73,000 votes.

North Carolina counties had yet to process about 27,500 absentee ballots and about 23,000 provisional ballots. In addition, approximately 93,000 voters requested absentee ballots that had not yet been received as of Tuesday afternoon. Ballots postmarked by Election Day can be counted as long as they are received by Thursday.