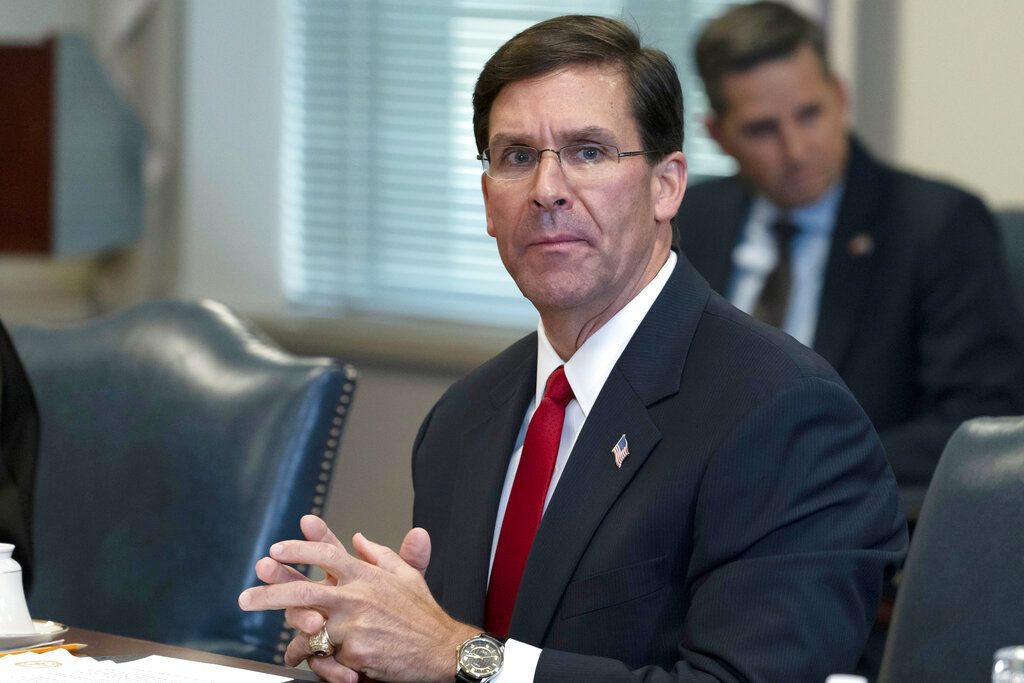 Presidents who win reelection often replace Cabinet members, including the secretary of defense, but losing presidents have kept their Pentagon chiefs in place until Inauguration Day to preserve stability in the name of national security.

“Chris will do a GREAT job!” Trump tweeted. “Mark Esper has been terminated. I would like to thank him for his service.”

Trump’s abrupt move to dump Esper triggers questions about what the president may try to do in the next few months before he leaves office, including adjustments in the presence of troops overseas or other national security changes.

Biden has not said who he would appoint as defense chief, but is widely rumored to be considering naming the first woman to the post — Michele Flournoy. Flournoy has served multiple times in the Pentagon, starting in the 1990s and most recently as the undersecretary of defense for policy from 2009 to 2012. She is well known on Capitol Hill as a moderate Democrat and is regarded among U.S. allies and partners as a steady hand who favors strong U.S. military cooperation abroad.

Miller has most recently served as the director of the National Counterterrorism Center and before that was a deputy assistant Defense Secretary and top adviser to Trump on counterterrorism issues. He has a long background with the military, having served as an enlisted infantryman in the Army Reserves and after that as a special forces officer. He also served in the wars in Afghanistan and Iraq. After his retirement from the military, Miller worked as a defense contractor.

During his roughly 16-month tenure, Esper generally supported Trump’s policies but more recently he was widely expected to quit or be ousted if Trump won reelection.

Esper, who was the official successor to former Marine Gen. James Mattis, routinely emphasized the importance of keeping the military and the Defense Department out of politics.

Trump soured on his first defense secretary, Mattis, who resigned in December 2018 over Trump’s abrupt decision — later rescinded — to pull all U.S. troops out of Syria, and then on Esper. The splits reflected Trump’s fundamentally different views on America’s place in the world, the value of international defense alliances and the importance of shielding the military from domestic partisan politics.

Esper’s departure has appeared inevitable ever since he publicly broke with Trump in June over the president’s push to deploy military troops in the streets of the nation’s capital in response to civil unrest following the police killing of George Floyd. Esper publicly opposed Trump’s threats to invoke the two-centuries-old Insurrection Act, which would allow the president to use active-duty troops in a law enforcement role.

Trump hinted at Esper’s shaky status in August, making a snide response to a reporter’s question about whether he still had confidence in Esper’s leadership. “Mark ‘Yesper’? Did you call him ‘Yesper?'” Trump said, in what appeared to be an allusion to suggestions that Esper was a yes man for the president. Asked if he was considering firing Esper, Trump said, “At some point, that’s what happens.”