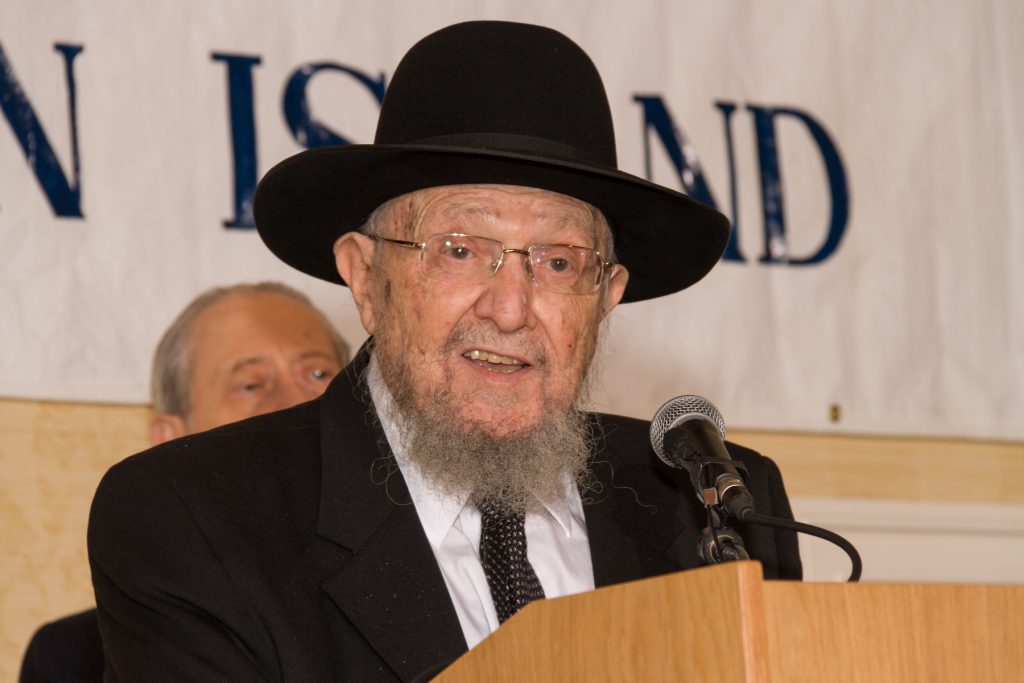 “He was a Gaon, a brilliant tamid chacham. Decades ago, his father (Hagaon Harav Moshe, zt”l) attested that “er ken Shas — he knows Shas.” Rav Moshe was measuring it with his own comprehension, and he said Rav Dovid knew it expertly. And he continued learning without pause.

“He was certainly a Posek. Harav Elyashiv, zt”l, considered him the Posek for America.

“He was ehrlich. The Rosh Yeshivah (Rav Moshe) said, “Du vest nisht gefinen aza ehrliche vi ehm — You will not find another ehrliche person like him.”

“So what can I add?” Harav Chaim Ganzweig, shlita, the Mashgiach of Mesivta Tiferes Yerushalayim asked the crowd of thousands mourning the loss of Harav Dovid Feinstein, zt”l. “The passuk in Yeshayah (55:3) states, “Chasdei Dovid hane’emanim.” Although the meforshim explain it refers to the kindnesses that Hashem does, which are permanent, I would like to explain, b’derech drush, that it may be going on the chessed that our Rav Dovid performed the entire day.

“He was not obligated to take responsibility for the yeshivah, nor for the kollel. And, indeed, all the harbotzas haTorah that he performed was entirely chessed. The way he interacted with people, regardless if they were rich or poor, wise or foolish, talmid chacham or am haaretz, great or small, all were recipients of his endless chessed. Most did not even realize the chessed he was doing for them, as he did a tovah for each person according to the individual’s need.”

As these poignant words of Rav Ganszweig reverberated through the crowd, tears streamed down not only from his eyes, but undoubtedly down the faces of the thousands who gathered to pay the kvod haacharon to the humble figure who nevertheless towered above the rest. He wore a plain jacket and no kapote, and his hat was just as plain. But those who knew him, or even happened to meet him for just a short time, soon came to realize that he was clothed in greatness.

“Before my zeide was niftar (in 5746/1986), few people out of the circle of his talmidim knew who he was,” his son, Rabbi Mordechai said. “He sat behind a beam and never sat on the mizrach until he was forced to move there when he took over the yeshivah and kollel after my zeide passed away. Suddenly, he exploded on the scene, and he was famous, but he remained oblivious to it all. He never rubbed shoulders with the prestigious people, but rather remained together with every single Yid.

“He shouldered the burden of the yeshiva and kollel, and undertook responsibilities for the klal like Chinuch Atzmai, and for the yeshivah of Rav Michel (Feinstein). But he still shlepped to weddings, and not only for those close to him. If someone who only knew him in passing needed a mesader kiddushin, he shlepped there. And he would come even if he was not accorded any kibud, because that was irrelevant to him. He did it to help another Yid.”

Rabbi Shmuel Fishelis, the son-in-law of Rav Dovid, began the levayah with reciting several kapitlach of Tehillim, and then summed up what Rav Dovid was for our generation. “Moshe Rabbeinu asked Hashem to appoint his successor as ‘Ish asher ruach bo’ (Bamidbar, 27:18) which Rashi explains to mean a person who could deal with the spirit of each individual. Rav Dovid knew how to give chizuk to each individual, how to give a smile and encouragement as the person needed.

“We know that Avraham was the pillar of chessed, Yitzchak the pillar of tefillah and avodah, and Yaakov was the ish tam yoshev ohalim. Rav Dovid embodied all these virtues. His chessed encompassed all, his tefillos in which he davened for all who approached him for brachos, and for Klal Yisrael as he carried their tzaros, and of course the Torah, where he was the address for the she’eilos from all corners of the world. The passuk (Shmuel I, 16:18) says concerning Dovid, ‘vaHashem imo.’ The Gemara in Sanhedrin (93b) explains this to mean that the halachah was like him in all places. And Rav Dovid’s psak was indeed respected in all places.”

Harav Reuven Feinstein, shlita, spoke about the need to understand the loss of such a towering Gadol. “My father (Rav Moshe) asked why in this week’s parashah, it says that Avraham came to eulogize Sarah and to cry for her. We know that Chazal say that bechi — crying — comes first (for three days). So why does it mention that Avraham said a hesped before it says he cried? The answer is that it depends on whom you are speaking to. If people do not realize what they lost, then you must first explain it in a hesped, and only then they can cry properly.

“The Gedolei hador are called the einei ha’eidah — the eyes of the congregation. They have the ability to see the future ramifications of everything that is transpiring now. Rav Dovid was able to foresee what lies in store because he lived through so many difficult tekufos. He saw the yeridah of Torah when he lived under the Stalinist regime, when he was unable to learn Torah with his father, yet er iz oisgeshtigen — he grew in that time, and eventually saw the Torah’s growth. He saw the tzaros of the world, and we need him so much now, to analyze and guide us in what is happening. If we do not understand that, then we should cry for that lack of understanding alone.”

Rav Dovid was born in Luban, Russia, in 5689/1929, while his father, Hagaon Harav Moshe Feinstein, zt”l, served as Rav. As the Stalinist regime began harassing the Rabbanim, the family fled to America and settled on the Lower East Side. Rav Dovid learned in Mesivtha Tiferes Jerusalem with his father, and eventually began delivering shiurim there. When his father was niftar, he took over the yeshivah and many of his responsibilities, including becoming a prominent chaver of the Moetzes Gedolei HaTorah of Agudas Yisrael of America; a member of the Vaad Roshei Yeshivah of Torah Umesorah; and was involved in Chinuch Atzmai, Agudas Harabbonim, and many other communal organizations. He wrote several sefarim, and answered she’eilos throughout the day and night from around the world.

Rabbi Moshe Dovid Tendler, a brother-in-law of Rav Dovid, described how Rav Dovid dealt with each person exactly as he should, and was a perfect fit. He explained that Rashi tells us in the beginning of this week’s parashah that Sarah was as beautiful at 20 as she was at 7 years old. In what way is a 20-year-old better than a 7-year-old? At 20, a girl may dress in a way which is not proper, and she stands out as not fitting. A 7-year-old has a certain charm that no matter what, she seems to fit perfectly, which helps people overlook minor infractions of social standards. That attribute was most befitting for Rav Dovid, since he knew exactly how to deal with each person; he interacted with his talmidim in the best manner, he answered she’eilos in the best manner. And, with his family, as was proper for them. “In each situation, he dealt with it as Hashem would want it to be dealt with. The informality of his smile belied the manner in which he spoke.”

Harav Shmuel Kamenetsky, shlita, Rosh Yeshivah of Yeshiva of Philadelphia, spoke briefly and described Rav Dovid as “an oisnahm fuhn ah mentch (an extraordinary person). It is especially hard to describe the many facets of his personality. He was kulo tov, kulo geshmak. He was a chaver tov, a good friend. He was a min bifnei atzmo (a breed unto himself). He understood everyone and what they needed, and he did whatever he could do to help.”

Rabbi Shlomo Fishelis, his grandson, who served as his gabbai in recent years, described some of the personal hanhagos he was able to observe. “He was so consistent. He would sit for three or four hours saying Kinos, and after three hours he was saying it exactly the same as he was at the beginning. His hasmadah was indescribable. Even when his boisterous triplet grandchildren entered the room, he continued his learning as he was oblivious to everything while he learned.

“He walked the streets with such hatzneia leches, like he was one of us, while he was actually on a different plane. He once said that he was born during the week of Behaalos’cha, where the Haftarah speaks about lashon hara. He said it had an effect on him, as he was quiet by nature, which helped him keep out of trouble. Yet he knew how to speak when he had to, and he let his family know that the door was always open to speak to him whatever they felt the need to.

The final speaker, his son Rabbi Mordechai Feinstein, told how over the past few months, he was able to perform many of the mitzvos and he did them with such simchah, which was a characteristic he exuded throughout his lifetime. He related how when the doctors told him he had to drink on Yom Kippur, he was not upset, since it was now the will of Hashem for him to drink. His entire life, he was vigilant to daven b’tzibbur, but when he was not able to do it lately, he was not upset, since this was now the retzon Hashem.

Reb Mordechai thanked all the people who helped over the years and over the last few months in particular when he was ill, and asked mechilah if he was negligent in giving the proper kavod. During his recent illness, Rav Dovid mentioned that he wished to ask others to be mochel him if he slighted them, and therefore Rav Mordechai was requesting everyone to oblige.

Rabbi Adelman, the director of Mesivta Tifereth Yerushalayim recited the Kel Malei Rachamim and asked mechilah in the name of the staff of the yeshivah. The aron then headed to the airport where it was transported for kevurah in Eretz Yisrael.