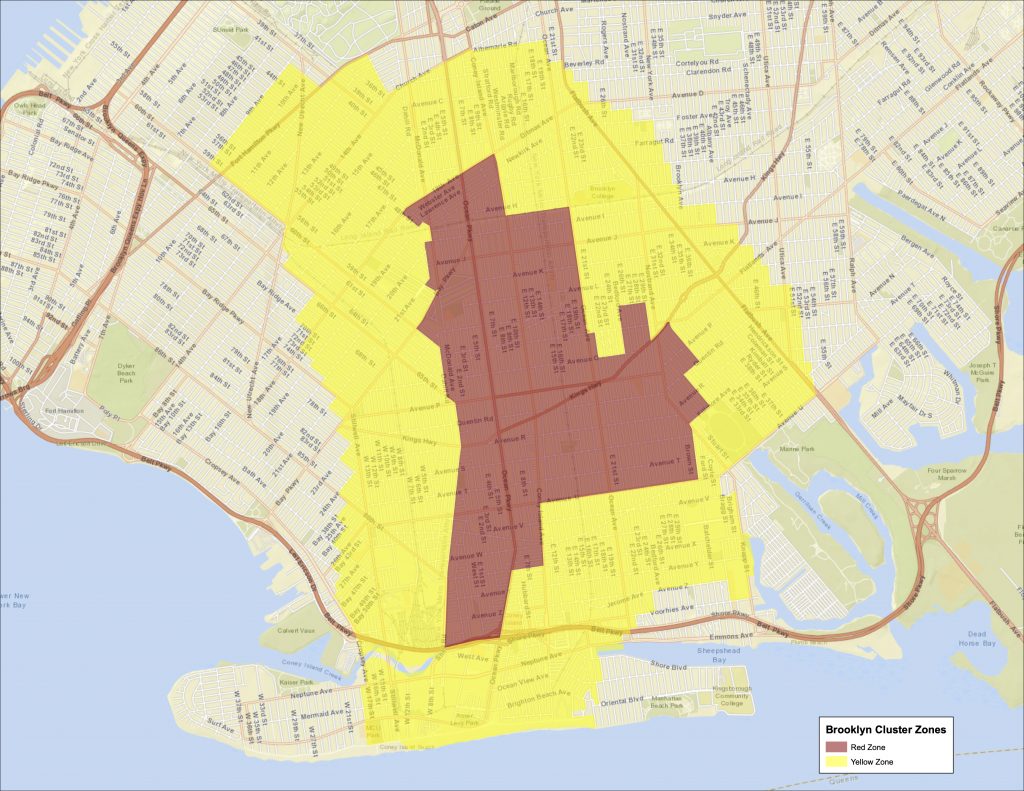 Governor Andrew M. Cuomo announced late Friday afternoon that COVID-19 micro-cluster areas in New York State have been updated with a decrease in the zones and restrictions in the decreased areas.

The Brooklyn COVID-19 hotspot total “red zone” area is dropping by 50%, the governor announced, citing improvement in percent-positivity rates in COVID tests. The Brooklyn yellow zone will also be reduced by 50%. Boro Park is no longer in the red zone, but Midwood is still in.

The new guidelines are as follows:

Houses of worship in red zones are allowed to have ten people, or less than 25% capacity. In orange zones, there can be less than 33% capacity, and a maximum of 25 people. In yellow zones, the area can be filled to 50% capacity.

Non-essential gatherings are still prohibited in red zones, but up to ten people may gather in orange zones, and the number of people permitted is raised to 25 in yellow zones.

On Friday, State Senator Simcha Felder, who represents a large part of the Brooklyn red zone, said, “Following weeks of work with the Governor’s office to ease restrictions in the red zone, we are finally turning a corner. There is some comfort in knowing that many people who live and work in the downgraded area will enjoy some peace of mind this weekend.”

In a message to the residents of these areas, Rabbi Yeruchim Silber, Director of NY Government Relations for Agudath Israel, said, “We appreciate the governor making this move. We look forward to all our restrictions being removed as soon as it is all safe. Your testing played a large role in getting this area reduced.”

Based on testing and hospitalization metrics, where the positivity rate has been consistently in 1%-2% range effectively over a ten-day period with low number of hospitalizations and new daily cases, Queens – Far Rockaway’s yellow zone has been completely removed.

Rockland County’s red zone, which has seen a positivity decline from 9.8% to 3.6%, will change to an orange warning zone.

Orange County’s orange zone, which now has been under 3% positivity, and hospital admission rates have declined, has met the metrics for transitioning to a yellow zone.

Focus zones in Queens – Kew Gardens/Forest Hills, where the positivity in this zone is currently 2.69% in its 7-day rolling average, is effectively flat over a ten-day period and will not change its status.

A new yellow precautionary zone focus area in Westchester County was also announced by the governor. Erie and Onondaga Counties, which have the highest rates in the state, will also be examined over the weekend.

“We are going to modify some micro-cluster zones in response to declining positivity rates,” Governor Cuomo said.