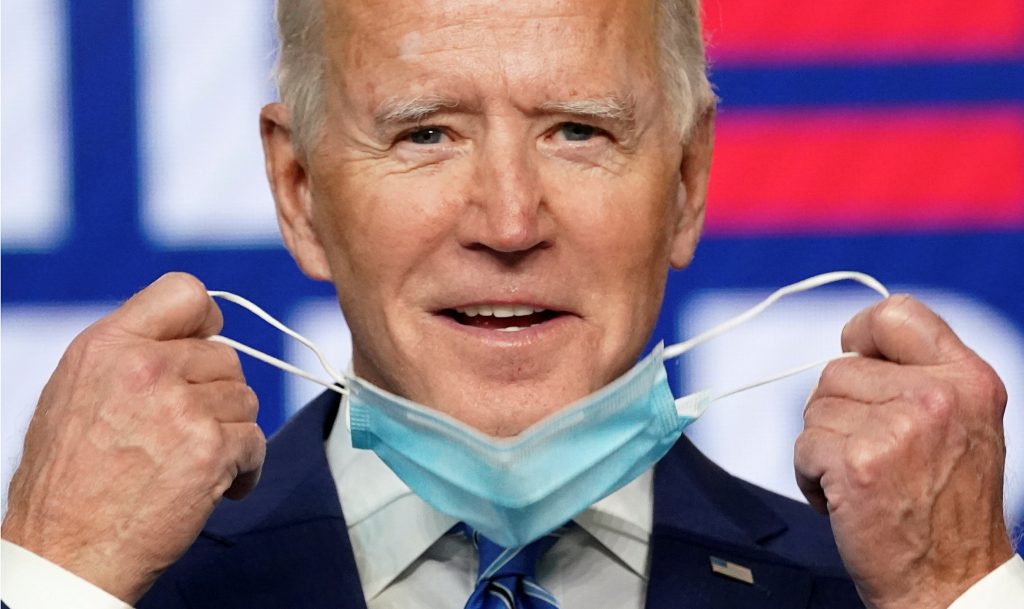 Democratic presidential candidate Joe Biden took the lead over President Donald Trump in the battleground states of Pennsylvania and Georgia for the first time on Friday, putting him on the verge of winning the White House.

Three days after polls closed, Biden has a 253 to 214 lead in the Electoral College. Winning Pennsylvania’s 20 electoral votes would put the former vice president over the 270 he needs to secure the presidency. Biden would also win the election if he prevails in two of the three other key states where he held narrow leads on Friday: Georgia, Arizona and Nevada. Like Pennsylvania, those three were still processing ballots on Friday. (North Carolina and Alaska have not yet been called, either, but it appears that Trump will be victorious in both.)

In the unlikely scenario that Biden wins only Georgia and Trump wins all the other undecided states, each candidate would have 269 electoral votes, which would bode well for the incumbent Trump and Vice President Mike Pence: in the event of an Electoral College tie, the presidency is decided by the Members of the House of Representatives who were elected in this year’s elections. While the Democrats will almost certainly have a majority of the House, each Member would not get their own vote; rather, each state’s delegation gets one vote. Since the Republicans will probably have a majority in more state delegations, Trump would likely be elected president. The vice president would be chosen by the Senate, which will likely be in Republican hands.

To win the election outright, Trump would need victories in Pennsylvania and Georgia, and in either Nevada or Arizona.

In both Pennsylvania and Georgia, Biden overtook Trump Friday morning on the strength of mail-in ballots that were cast in urban Democratic strongholds like Philadelphia and Atlanta.

With his re-election chances fading, Trump escalated his attacks on the results, appearing at the White House on Thursday evening to claim that the election was being “stolen” from him. His campaign is pursuing a series of lawsuits across battleground states.

The campaign’s general counsel, Matt Morgan, asserted in a statement on Friday that the elections in Georgia, Nevada and Pennsylvania all suffered from improprieties and that Trump would eventually prevail in Arizona.

“This election is not over,” he said. “Biden is relying on these states for his phony claim on the White House, but once the election is final, President Trump will be re-elected.”

Election officials in those states have said they are unaware of any irregularities.

In Pennsylvania, Biden moved ahead of Trump by 6,817 votes on Friday morning, according to CNN, while in Georgia, he opened up a 1,098-vote lead. Both margins were expected to grow as additional ballots were tallied. Ninety-five percent of the vote has been counted in Pennsylvania, while more than 99% has been tallied in Georgia.

Biden, 77, would be the first Democrat to win Georgia since Bill Clinton in 1992.

Pennsylvania, a battleground that helped hand Trump his 2016 victory, had long been seen as crucial to the 2020 race, and both candidates lavished enormous sums of money and time on the state.

As the country held its breath for a result in the White House race, Georgia and Pennsylvania officials expressed optimism they would finish counting on Friday, while Arizona and Nevada were still expected to take days to complete their vote totals.

Trump, 74, has sought to portray as fraudulent the slow counting of mail-in ballots, which surged in popularity due to fears of exposure to the coronavirus through in-person voting. Trump’s campaign has filed lawsuits in several states, though judges in Georgia and Michigan quickly rejected challenges there. Biden campaign senior legal adviser Bob Bauer called them part of a “broader misinformation campaign.”

The close election has underscored the nation’s political divides, and if he wins Biden will likely face a difficult task governing in a deeply polarized Washington.

Republicans could keep control of the Senate pending the outcome of four undecided Senate races, including two in Georgia, and they would likely block large parts of his legislative agenda, including expanding healthcare and fighting climate change.

The winner will have to tackle a pandemic that has killed more than 234,000 people in the United States and left millions more out of work, even as the country still grapples with the aftermath of months of unrest over race relations and police brutality.

Trump fired off several tweets in the early morning hours on Friday, and repeated some of the complaints he had aired earlier at the White House. “I easily WIN the Presidency of the United States with LEGAL VOTES CAST,” he said on Twitter.

Twitter flagged the post as possibly misleading, something it has done to numerous posts by Trump since Election Day.

Trump had appeared in the White House briefing room on Thursday evening and alleged that the election was being “stolen” from him.

Trump lambasted election workers and sharply criticized polling before the election that he said was designed to suppress the vote because it favored Biden. The president did not provide evidence for his claims.

“They’re trying to rig an election, and we can’t let that happen,” said Trump, who spoke in the White House briefing room but took no questions. Several TV networks cut away during his remarks, with anchors saying they needed to correct his statements.

Biden, who earlier in the day urged patience as votes were counted, responded on Twitter: “No one is going to take our democracy away from us. Not now, not ever.”

Trump supporters, some carrying guns, ramped up their demonstrations against the process on Thursday night. In Arizona, Trump and Biden supporters briefly scuffled outside the Maricopa County Elections Department in Phoenix.

In Philadelphia, police said they arrested one man and seized a weapon as part of an investigation into a purported plot to attack the city’s Pennsylvania Convention Center, where votes were being counted.