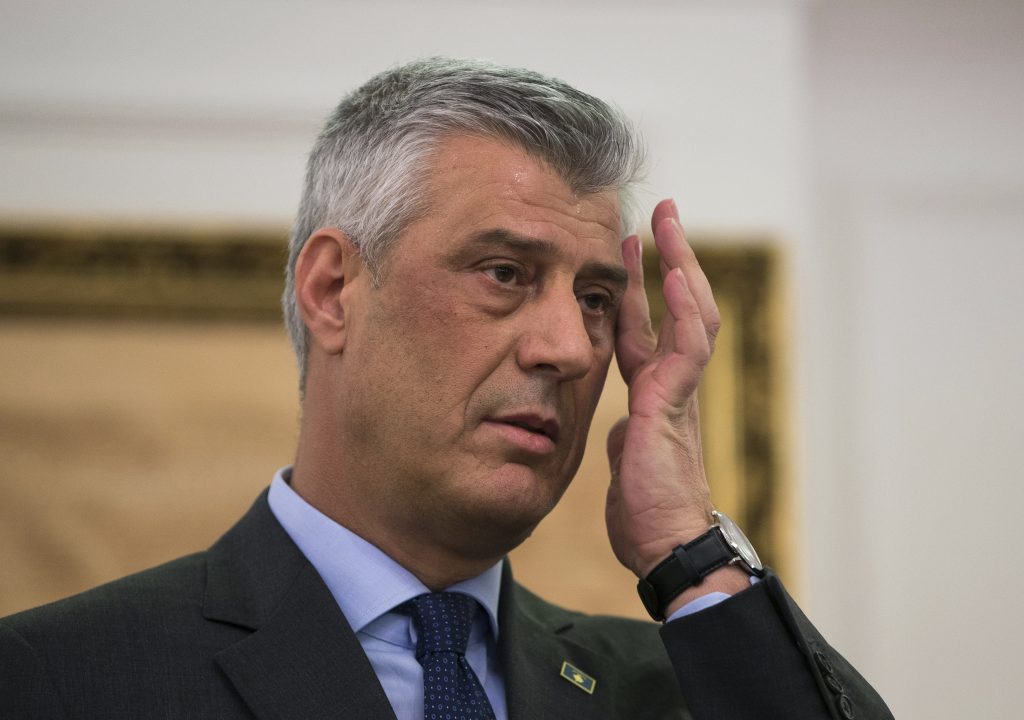 Kosovo’s President Hashim Thaci, a guerrilla leader during Kosovo’s war for independence from Serbia in the late 1990s, resigned on Thursday and will face charges for war crimes and crimes against humanity at a special court based in The Hague.

Thaci said he was taking the step “to protect the integrity of the presidency of Kosovo” and to preserve the historical truth of who was perpetrator, and who victim, in the conflict.

“We are a freedom-loving people and not vengeful,” the 52-year-old Thaci said at a news conference in Pristina, Kosovo’s capital. “That is why no claim may rewrite history. Kosovo has been the victim. Serbia has been the aggressor.”

Thaci was indicted in June along with nine other former rebel leaders by a special Kosovo court and associated prosecutor’s office based in The Hague, Netherlands, which were set up five years ago to investigate and try former ethnic Albanian rebel leaders for alleged war crimes. The charges include murder, enforced disappearances, persecution and torture.

Among others charged with committing crimes during and after the war is Kadri Veseli, a former parliament speaker and an opposition party leader, who said he planned to travel to the The Hague on Thursday and was resigning from “all public political activities.”

Both Thaci and Veseli have denied committing any crimes.

Thaci, a commander of the Kosovo Liberation Army during the war, said he was proud to have belonged to that force, calling it “the most sublime value of the Albanian nation.”

He called the indictment “the smallest price we have to pay for the freedom of our people.”

The government said in a statement that all defendants should be considered innocent unless the court decides otherwise.

“No one may judge our fight for freedom,” the government said, adding that the KLA “fought for the liberation of our country, to protect the house and not in a foreign land, and as such it has the support of the international community.”

Thaci held a ceremony at his office to hand over his presidential duties to parliament speaker Vjosa Osmani. The government said the “constitution and the laws in power guarantee a clear transition of powers and exercising the responsibilities without any institutional vacuum.”

Thaci was elected president in February 2016. His current term ends in April, when the national Assembly of Kosovo was expected to elect a new president.

Amnesty International’s Balkans researcher, Jelena Sesar said the indictment of Thaci and the nine others would give hope to “thousands of victims of the Kosovo war who have waited for more than two decades to find out the truth about the horrific crimes committed against them and their loved ones.”

The European Union issued a statement welcoming Thaci’s cooperation with the Hague-based legal institutions, saying it “strongly supports the work of the Kosovo Specialist Chambers and the Specialist Prosecutor’s Office.

“Full cooperation with these institutions is essential as an important demonstration of Kosovo’s commitment to the rule of law, which in turn is a core element for Kosovo’s progress on its European path and for EU’s engagement with the Western Balkans as a whole,” the EU statement said.

The prime minister of Albania, which borders Kosovo, expressed his country’s support to Thaci in “this battle for Kosovo and the inviolable justice of the liberating war.” Prime Minister Edi Rama described the indictments as resulting from an “absurd process that will finally stamp the KLA clarity and the inability to rewrite its history.”

Exact details of the 10-count indictment against Thaci, Veseli and the others have not ben released. Announcing the existence of the indictment earlier this year, the Specialist Prosecutor’s Office alleged that the men were “criminally responsible for nearly 100 murders.”

At the time, the prosecutor’s office said it made the existence of the indictment public because of what it called repeated efforts by Thaci and Veseli “to obstruct and undermine” the work of the court and said they were believed to have tried to overturn the Kosovo law that created the court.

The formation of the court and prosecutor’s office followed a 2011 report by the Council of Europe, a human rights body, that included allegations that KLA fighters trafficked human organs taken from prisoners and killed Serbs and fellow ethnic Albanians.

Sesar, the Amnesty International expert, said that a “culture of impunity” had persisted in Kosovo since it has taken nearly 10 years for those suspected of criminal responsibility to be brought to court.

Kosovo-Serbia ties are still tense 21 years after war’s end, despite nine years of negotiations mediated by the European Union and supported by the United States.

The indictment was announced in June when Thaci was en route to a meeting at the White House with Serb counterpart Aleksandar Vucic. That meeting was held with Kosovo’s prime minister instead in September.

In 2008 Kosovo declared its independence from Serbia, a move that Serbia refuses to recognize.