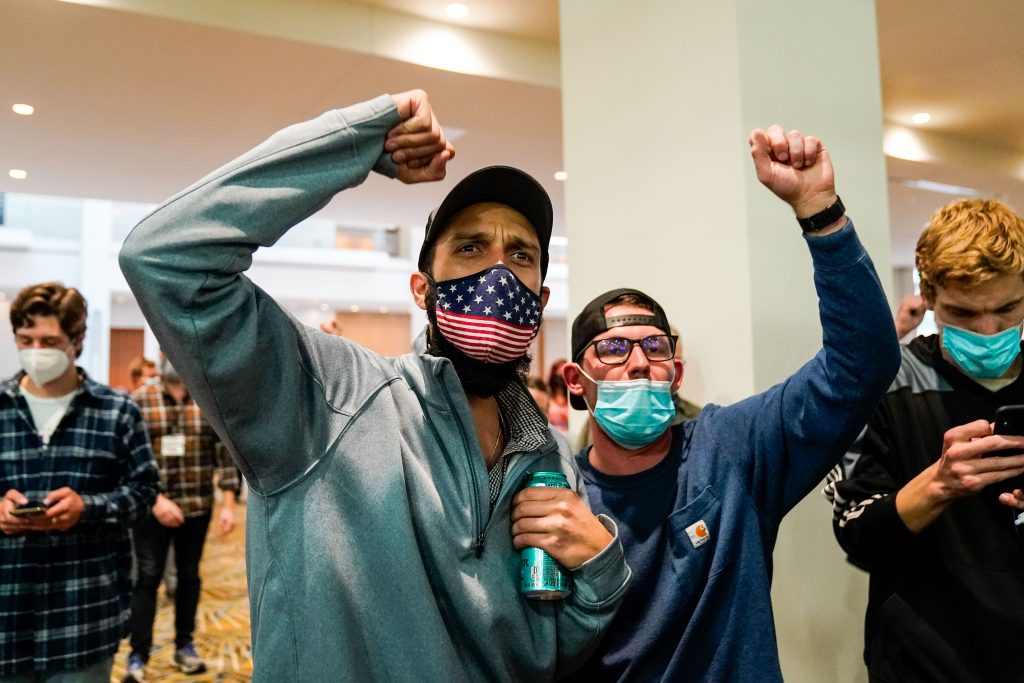 The presidential race dragged on Thursday as Joe Biden hoped to clinch the White House by winning just one more state, and Democrats voiced confidence he will get there in Nevada, Pennsylvania or Georgia.

The Trump campaign has responded by rushing attorneys to those states and filing lawsuits aimed at stopping the vote count — just as Trump had demanded with his one-line tweet on Thursday morning: “Stop the count!” By midday, judges had already rejected some suits. Protests erupted in cities across America.

In the electoral-vote-rich state of Pennsylvania, Trump’s lead diminished to 115,000 votes with hundreds of thousands of ballots — believed to lean heavily Democratic — still left to count. Biden campaign officials say their modeling shows the Democrat is poised to win that state, which would push him past the 270 electoral votes needed for election.

Biden also has other paths open to him. If his lead holds in Arizona, where the Associated Press has already declared him the winner, he need only maintain his narrow lead in Nevada to capture the presidency. The uncounted votes in Nevada are also believed to lean Democratic, though the count there will extend into the weekend. After Nevada election officials released a tranche of votes Thursday, Biden’s lead crept up past 12,000.

The outlook in Arizona, though, is muddled. Trump gained ground on Biden there Wednesday night, and there is still room for the president to overtake him there. The state, where Biden’s lead dropped to just 68,000 votes, is not essential to a Biden victory if the former vice president wins Pennsylvania. Some major news networks have declined to call Arizona in Biden’s favor.

The race was also coming down to a razor-thin margin in the GOP-dominated state of Georgia. Trump’s lead there dropped to just 13,539 votes. The nearly 50,000 ballots left to count are predominantly from districts that are heavily Democratic. The latest count also appeared to throw Republican Sen. David Perdue, who is leading in his race, into a runoff with rival Jon Ossoff, by reducing Perdue’s share of the vote to just below the 50% threshold set by state law.

Wins in Georgia and Nevada would push Biden over the top even if he ultimately fell short in Arizona and Pennsylvania. Trump’s path is far narrower. He must win Pennsylvania and most of the other states where the race has not been called to hold onto the White House.

As ballots were counted across the country, the Trump campaign continued to make claims that the vote was being rigged. It filed lawsuits in several states, alleging unspecified voting irregularities.

The courts have not yet ruled on a Trump lawsuit in Pennsylvania seeking to bar the counting of ballots received after Tuesday. But by Thursday afternoon, state court judges had rejected Trump’s lawsuits in Georgia and Michigan, and counting proceeded uninterrupted. In a lawsuit filed in Pennsylvania, the Trump campaign succeeded in getting a judge to order that observers could stand closer to where ballots are being processed. But Philadelphia officials appealed to the state’s Supreme Court, arguing that additional, freely circulating observers could be disruptive, and potentially threatening in a pandemic.

“Listen guys, democracy dies in darkness,” Corey Lewandowski, a Trump campaign adviser, said outside a Philadelphia convention center where hundreds of city workers are counting ballots. “This is the opportunity to shed light on what’s going on inside this building.”

Lewandowski and other members of Trump’s team then marched inside to continue their observation. Pro-Biden protestors gathered nearby, holding signs that said “Count Every Vote” and “Surrender to Democracy.”

Protesters on both sides, some armed, emerged outside locations where vote-counting was underway across the country. One such protest in Detroit on Wednesday night drew more than 100 Trump supporters, demanding that vote counting be stopped.

Michigan Secretary of State Jocelyn Benson on Wednesday evening said the aim of protests was simply to create a disruption. “If they thought they were going to intimidate or stop anyone from doing their job inside the center, then they don’t know Detroit,” she said.

“I called it a frivolous lawsuit without merit because that’s what it is,” Benson told reporters. “The litigation is ongoing. We’ll let the process play out and respect the process. What I can say with confidence and have already emphasized is the absentee ballot tabulation process was efficient, transparent, secure and methodical. Workers worked to dot every “i,” cross every “t” and take great pride in the important work they knew they were doing.”

In the Georgia claim that was dismissed, the campaign alleged that late-arriving ballots are being improperly mixed with ones that arrived on time.

Such lawsuits, when successful, typically only change the count by a few hundred votes. Trump is facing potential deficits of tens of thousands of votes in multiple states.

On Thursday, the Trump campaign filed another lawsuit, in Nevada. It alleges that people voted there despite not living in the state.

Biden campaign officials said in a briefing with reporters that the litigation is “theater” designed to taint the election and create a perception that legal counting of votes was improper.

“This is part of a broader misinformation campaign,” said Biden legal adviser Bob Bauer. “It is to create an opportunity for them to message falsely about what is taking place in the elections process.”