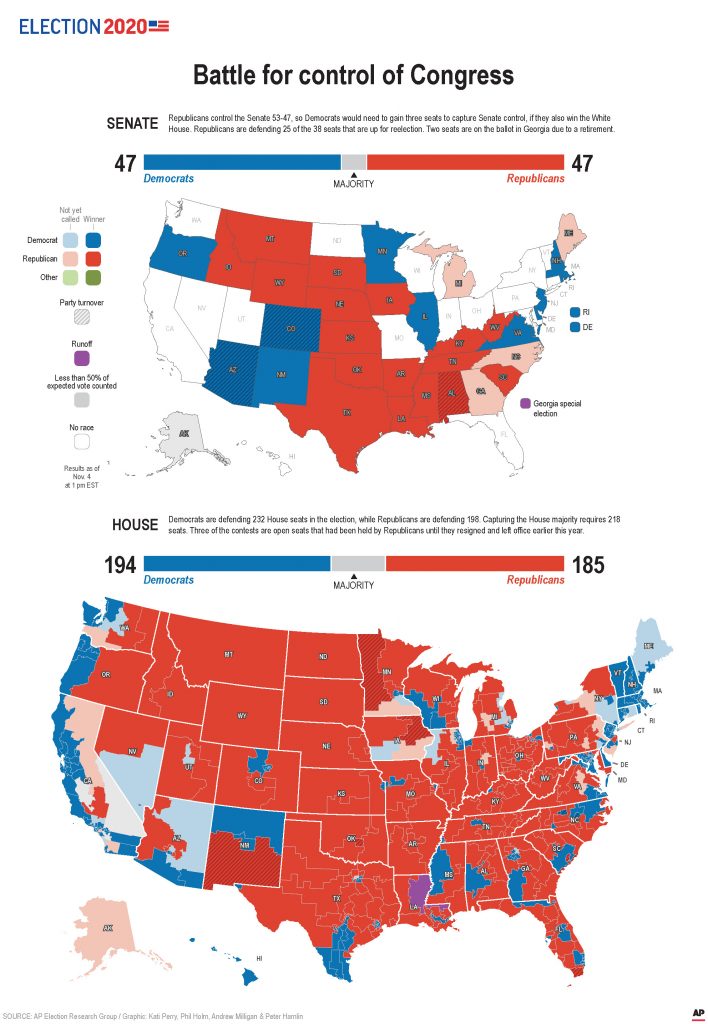 Congressional Democrats awoke Wednesday to a political debacle despite big optimism heading into the elections, as Republicans continued to cling to their Senate majority and are on track to make unexpected gains in the House.

As the presidential race headed toward a photo finish that could take days to sort out, House Speaker Nancy Pelosi, D-Calif., and Senate Minority Leader Charles Schumer, D-N.Y., faced another political letdown that, so far, resembled their failure in 2016 when President Donald Trump was elected.

“Overall we had a better election than most people thought across the country,” Senate Majority Leader Mitch McConnell, R-Ky., told reporters Wednesday in his home state.

The only clear Democratic victory came in Colorado, and a Democratic challenger held a significant lead in Arizona. The Democratic Party remained hopeful in Michigan that its incumbent, Sen. Gary Peters, would pull ahead as votes come in from large urban centers.

Taken together, with the loss of a Democratic seat in Alabama, Schumer faces long odds of winning back the majority, which would mark a fourth straight electoral defeat for Senate Democrats.

If those races stand, McConnell will be poised to either play a significant role in curbing the new Biden administration’s agenda and hold sway over its presidential appointments – or continue to be a force in shepherding Trump’s appointees to confirmation in a second term, depending on the outcome in the presidential race.

Just as the nation cleaved into a rural-exurban bloc versus suburban-urban enclave in the presidential race, the congressional campaigns broke sharply along those lines and House Republicans won back several seats in traditionally conservative areas that they had lost in the 2018 midterms.

“All I can say is: This has been overwhelming,” Sen. Lindsey Graham, R-S.C., said after defeating Democrat Jaime Harrison, whose campaign broke fundraising records and brought a hard-fought Senate race to the deeply conservative state. “I’ve never been challenged like this, and I’ve never seen more support before than tonight.”

Graham ended up winning by double digits in the traditional Republican stronghold, despite public and private polling that showed the race to be a toss-up just a few days ago.

In Georgia, Sen. David Perdue (R) narrowly hovered over 50 percent, the threshold for which he would avoid going to a Jan. 5 runoff against Democrat Jon Ossoff.

However, with votes still coming in from the metro Atlanta region, Perdue could be thrown into a runoff, joining Sen. Kelly Loeffler, R, and Raphael Warnock, D, who are headed to the Jan. 5 runoff in a special election in Georgia.

If all current ballot counts hold, those two Georgia runoffs would give Democrats a long-shot chance to knot the Senate at 50-50 in early January and claim the majority if Biden wins the presidency.

In even more unexpected fashion, Pelosi is on track to lose seats in her caucus and come out of this election season with the smallest majority in about 20 years.

That reality stands in contrast to an early victory lap Tuesday, when she and Democratic Congressional Campaign Committee Chairwoman Cheri Bustos, Ill., were expressing confidence that their most vulnerable members had won reelection and the party would make inroads in suburban strongholds held by Republicans.

Instead, it was House Minority Leader Kevin McCarthy, R-Calif., who was trumpeting the results on Wednesday.

“Republicans defied the odds and grew our party last night,” he tweeted. “In districts all across the country, Americans rejected socialism and voted for freedom. Nancy Pelosi: you’ve been put on notice.”

Bustos, whose district stretches westward to the Iowa border, found herself in a dogfight two years after winning by more than 20 percentage points. As of Wednesday morning, her lead was just three percentage points.

But House Democrats also failed in some suburban areas. The warning signs for Democrats started early in South Florida, when two first-term Democratic incumbents who were projected to win reelection, Reps. Debbie Mucarsel-Powell and Donna Shalala, trailed Republican challengers. There, Biden’s underperformance among Latinos and Republicans’ repeated attacks on the Democratic Party as socialist appeared to undercut both women.

And outside Indianapolis, where a veteran Republican decided to retire, the Democratic nominee trailed by seven percentage points Wednesday morning in what party strategists had considered a bellwether of whether traditionally GOP-leaning Midwestern suburbs had recoiled from Trump and Republicans in similar fashion to the 2018 rebellion in East and West Coast districts.

Congressional Republicans were already gloating at how they had knocked back the Democratic hype, touting how many of their female and minority candidates had won or held commanding leads.

“We made it clear throughout this cycle we have the message, we have the candidates and we have the resources to win. The results last night and this morning proved just that,” Rep. Tom Emmer, Minn., chairman of the National Republican Congressional Committee, said Wednesday morning in a statement.

Republicans estimated that their overall House performance would shrink Pelosi’s majority south of 230 votes, the first time the party in power had such a small margin since the 2002 elections left Republicans with just 229 seats.

In the Senate, Schumer’s caucus clung to narrow hopes of actually winning a couple more seats and possibly the majority, with the most likely path coming from the quirks of state law in Maine and Georgia.

In Maine, Sen. Susan Collins, R-Maine, had a little more than 50 percent of the vote, with most ballots counted, but should she fall below that margin, the state law calls for a secondary counting in which voters’ second and third choices get factored into the tally. But her opponent, Sara Gideon, D, fell flat Tuesday, with less than 43 percent of the vote, and would need a remarkable lift to win in the ranked-choice rounds.