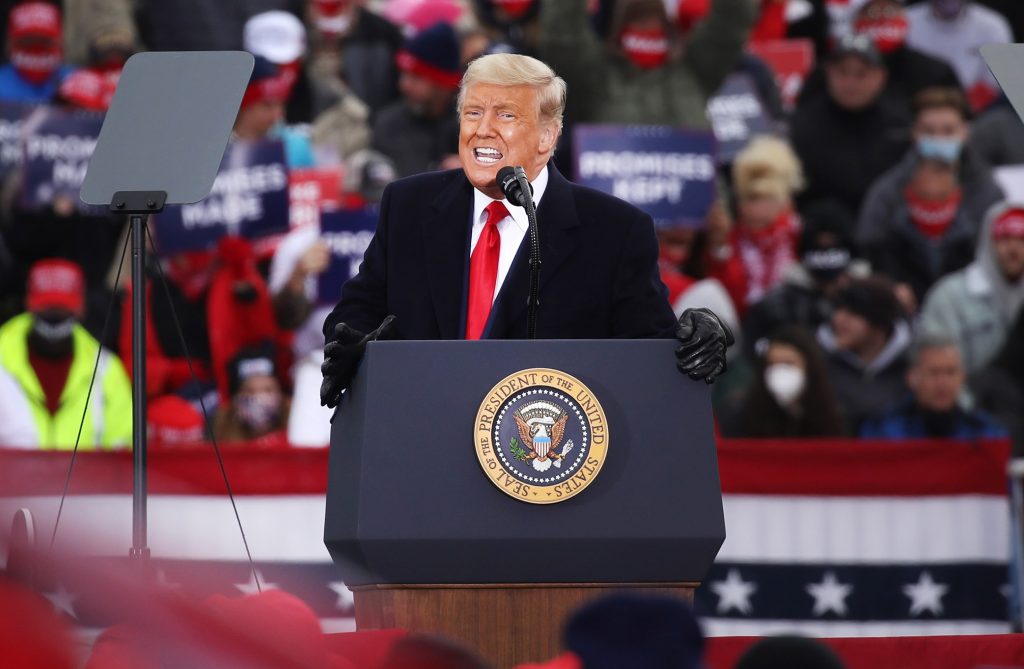 President Donald Trump was traveling across Pennsylvania on Saturday, holding several large-scale rallies in defiance of public health guidance, attacking Democratic rival Joe Biden, leveling claims of electoral fraud — and making no secret of the importance the state holds for his reelection hopes.

“If we win Pennsylvania, it’s over,” Trump told several thousand supporters gathered at Reading’s airport. “It’s over. Let’s do it.”

Earlier in the day in Bucks County, Trump called Pennsylvania “the state that will save the American dream.” He spoke outside the house George Washington used to stage his crossing of the Delaware River during the Revolutionary War. And he drew an ominous parallel to the 2020 election — the stakes of which both parties have framed in apocalyptic terms.

“It was a tough night,” Trump said in Newtown. “It was a violent night. … It turned the entire tide of the war. … They were determined to live in a country where power belongs to the people … That priceless inheritance is at stake just three days from now..”

Trump continued to try to sow doubt about an electoral process already well underway and set to reach its climax next week.

He again encouraged his supporters to go to Philadelphia and scrutinize polling places there. Only official campaign poll watchers certified by the city can do that. He complained that the U.S. Supreme Court hasn’t overturned a state Supreme Court ruling extending the deadline for mail ballots. The case remains pending before the high court, and Democrats fear it may toss out ballots that arrive after Election Day with no recourse for voters. He suggested that Gov. Tom Wolf, a Democrat, would tamper with mail ballots.

And he signaled that if results aren’t known the night of the election, they can’t be trusted.

“You wait and very bad things can happen with ballots,” Trump said.

Pennsylvania elections officials aren’t allowed to begin opening mail ballots until 7 a.m. on Election Day, it could take days to complete that count, and there is no evidence whatsoever that anything nefarious will happen during the process.

” November 3rd is going to come and go and we’re not gonna know and you’re gonna have bedlam in our country,” Trump said.

Trump’s daylong trip across Pennsylvania in the closing hours of the campaign was a sign of how critical the state is for reelection prospects. Following his stops near Washington’s Crossing and in Reading, he was set to appear in Lycoming and Butler Counties.

Both candidates plan to crisscross the state in the coming days. Democratic nominee Joe Biden will spend Sunday in Philadelphia. On Monday, Jill Biden, Kamala Harris, and her husband Doug Emhoff will join him.

A parade of Biden surrogates, including Pete Buttigieg and celebrities like Debra Messing, also appeared around the state Saturday. Vice President Mike Pence will hold two rallies in Pennsylvania on Sunday, in Erie and Latrobe. Trump’s son Eric and daughter Ivanka will campaign in the state Sunday. And Trump will be back in Pennsylvania with a rally in Luzerne County on Monday.

In Newtown, Trump was notably subdued for a crowd of several hundred gathered on a cool Halloween morning. His performance later in front of a larger crowd was more energetic. But both hit on common themes he brings up in the state, including a claim that Philadelphia will be a hot spot for voter fraud.

Trump repeated his frequent claim that the U.S. is “rounding that turn” on the pandemic, despite both cases and hospitalizations spiking across the country.

“I’m here,” he said referring to his recovery after contracting the virus, later adding, “I’m a great physical specimen.”

And Trump painted a dark picture of America if Biden wins the White House.

He accused Biden of “betrayal and treachery,” drawing boos and a chant of “Lock him up.”

Campaigning for Biden in Michigan, former President Barack Obama assailed Trump for focusing on the size of the crowds at his rallies.

“When a country’s going through a pandemic, that’s not what you’re supposed to be worrying about,” Obama said. “That’s difference between Joe Biden & Trump right there. Trump cares about feeding his ego, Joe cares about keeping you and your family safe.”

Trump won Pennsylvania four years ago by less than 1 percentage point. He lost Bucks County to Hillary Clinton only narrowly, even as she won Philadelphia’s other suburban collar counties more comfortably. He won Berks County, where he will appear at the Reading airport Saturday, by 10 points. Lycoming and Butler Counties are more indicative of Trump’s focus in other stops this month on maximizing vote totals in areas he won comfortably: He won Lycoming by nearly 45 points and Butler by 37 points.

In a final Muhlenberg College/Morning Call poll released Saturday, Biden maintained a slim 5-point lead over Trump in the state — within the survey’s margin of error. Polls have consistently showed Biden leading Trump by mid- to high-single digits in a state that could determine the winner. Strategists in both parties have expected the race to tighten at the end.

Trump personally attacked Biden’s physical appearance throughout the day, mocking his eyes (accusing him of having face lift surgery), his stature (“very slight”), and his mental fitness, at one point looking around imitating a confused person.

Before the Bucks rally on Saturday, Lynn O’Brien, a veteran of the U.S. Army Nursing Corps, said she thought Trump had “a very good chance” of being reelected.

“I think the people who have been hesitant to speak out will show up at the polls.” Asked why people are reluctant, O’Brien said, “I think because of fear of being censored or canceled, or have your sign taken out of your yard. Things like that have been going on. We hear about it and say, ‘No, that’s not for me.'”

Milo Morris, of Riegelsville, predicted a tight race, but said, “I think he will pull it out.”

“I think at this point people very much have their minds made up. I haven’t run into anybody who is sitting on the fence still,” Morris said. “So people are either all in for Biden or all in for Trump.”