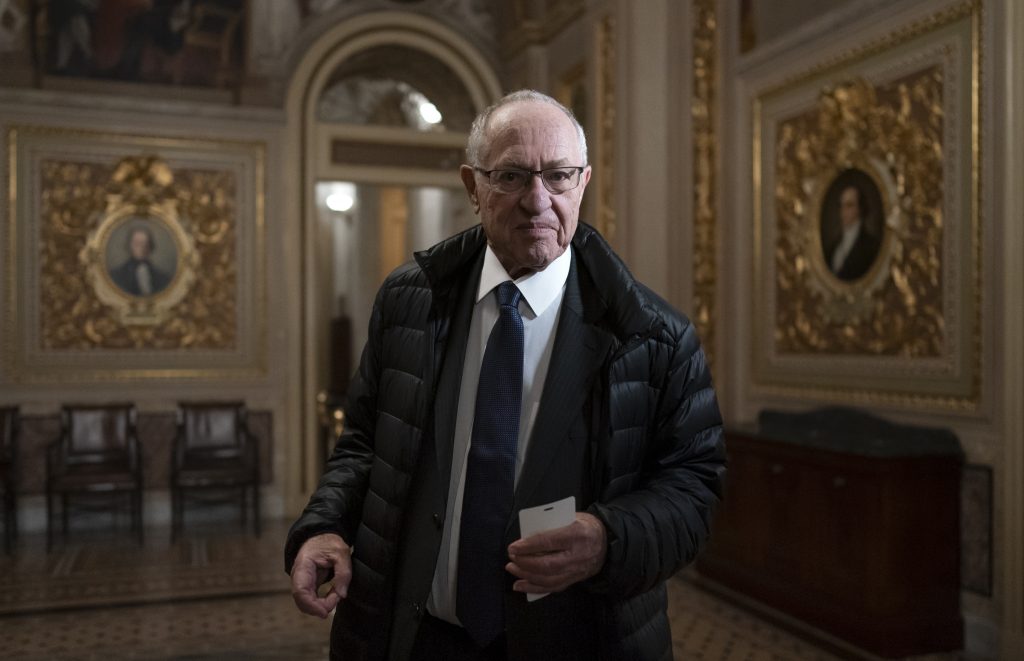 The 2020 presidential election is widely expected to be unique in the annals of this quadrennial American tradition. With tens of millions expected to vote by absentee ballot due to the COVID-19 pandemic, and a candidate, President Donald Trump, who has repeatedly raised concerns about fraud with mail-in ballots, many expect there to be no known winner on Election Night, but drawn-out ballot tabulations and legal battles.

In advance of an election that may be decided in a courtroom, Hamodia spoke with Alan Dershowitz — famed attorney, legal scholar and retired Harvard Law professor — about potential issues that may arise on Nov. 3, and in the weeks thereafter.

Dershowitz, who described himself in The Hill as “a liberal Democrat in politics, but a neutral civil libertarian when it comes to the Constitution,” served as Trump’s attorney during the President’s impeachment trial, despite having voted for Hillary Clinton in 2016; has defended the President on national news programs; and has advised Trump on issues ranging from the Middle East to prison reform. But Dershowitz says he will play no role in any legal battle surrounding the elections.

In this interview, conducted days before Judge Amy Coney Barrett was confirmed to the Supreme Court, Dershowitz explains why he believes Barrett should recuse herself from any case involving the elections, Bush v. Gore is a bad legal precedent for presidential elections, and the U.S. should expand access to mail-in ballots despite an increased risk of fraud.

Interview has been edited lightly for clarity.

Are you expected to be involved in a legal battle for Trump if there is a contested election?

I just defended the Constitution, and I believe that the impeachment charges against him are unconstitutional. That’s the limit of my involvement.

So for this discussion, you’re just talking as a legal observer, not on any side, correct?

And I’m not a Trump supporter politically. My vote is my private vote. I don’t disclose who I vote for. But I’m not a political supporter of either candidate at this point.

What legal issues do you anticipate in this election, if it is contested?

The biggest issue is going to be whether or not there were fraudulent or mistaken ballots by mail. And that case may very well go to the Supreme Court. And the Supreme Court may well decide that issue on a 5-4 vote, with the deciding vote cast by a justice who was just nominated by one of the litigants. That’s the biggest issue.

Do you believe that if Amy Coney Barrett is confirmed to the Supreme Court, she should recuse herself from such a case?

The President has said that he wants her on the Court before the election. That creates the impression, whether correctly or incorrectly, that he may have appointed her in order to get her to vote [on a potential case involving the election]. Now, they didn’t have a meeting, they didn’t have any deal or arrangement. So I’m not saying there’s real bias. But the perception of bias may be there. So I would think that, under the law, under the Supreme Court’s decision in a recent West Virginia case, and under the statutory rules, that the risk of unconscious or conscious bias coupled with the appearance of bias, if I were she, I would recuse myself.

[Editor’s note: the Supreme Court case Dershowitz refers to is Caperton v. Massey (2009), in which the Court ordered a judge to recuse himself from a case in which one of the litigants had previously raised large sums for the judge’s election campaign.]

Supreme Court justices frequently rule on decisions that involve a presidential administration. Why is this different from any other case?

Because of the recency of the appointment and the statement by the President, who would be one of the litigants. This wouldn’t be a case of the administration; this would be a case in which Donald Trump would be the named plaintiff or defendant, and his presidency may be at stake. And if she has just been put on the Court by him, I’m not saying that it’s obligatory necessarily that she recuse herself — justices don’t feel bound by rules, but decide for themselves. I’m saying if I were a justice under her circumstances, I would seriously consider recusing myself.

So, in theory, let’s say Trump overturned Obamacare, and the case came before the Supreme Court. You would say Justice Barrett should not have to recuse herself?

On Obamacare, I don’t think she would have to recuse herself. No.

So it’s only specifically regarding being elected?

Regarding a potential contested election, is there any precedent for a legal battle like this? Typically, election battles would be regular ballots; here, it might be mail-in ballots. Can you think of any precedent similar to what we may have this year?

Of course: Bush vs. Gore (2000), where the Supreme Court invented an Equal Protection claim, and as a result of that invention — it had never before been used and never since been used — they stopped a recount in Florida. So I think that’s the precedent. It’s not a very good precedent, but it’s a precedent.

That involved actual ballots, not mail-in ballots. Do you think there’s any significant difference?

There were both — there were mail-in ballots and actual ballots.

But no, mail-in ballots are completely valid under state law, so there’s no difference as a matter of law between mail-in ballots and actual ballots. You can have fraud in actual polling booths, and you can have mistakes. The worst mistake in our history was the butterfly ballot, as a result of which, hundreds, maybe even more, Jews voted for Pat Buchanan, the most unpopular candidate imaginable. The butterfly ballot, which was illegal, had Buchanan’s name right opposite Joe Lieberman’s name. And so a lot of Jews voted for him, and that may have determined who the President of the United States was.

In Bush v. Gore, the court famously wrote, “Our consideration is limited to the present circumstances, for the problem of equal protection in election processes generally presents many complexities.” Law Professor Josh Blackman has called this case the “unprecedent,” pointing out that other than in a single footnote in 2013 [in a solo dissent by Justice Clarence Thomas], Bush v. Gore has never been cited in any Supreme Court case. Do you believe the court may use this year, or ever again, Bush v. Gore as a precedent?

I think it’s unconstitutional for the Court to decide a case without it being a precedent. They have no power to decide cases without those cases being precedents. My own view is the Supreme Court acted unconstitutionally in Bush v. Gore by saying that, and I don’t think its admonition that the case should not be used as precedent will be followed.

I want to ask about election-related deadlines. December 8 is the deadline for resolving election disputes; the electors meet and cast their ballots on December 14; the deadline for receipt of ballots is December 23. These deadlines are not in the Constitution. The Constitution says, “The Congress may determine the Time of chusing the Electors.” Do you believe that, considering the issue this year of mail-in ballots, Congress should change the law to allow for later deadlines?

Not now. They may have to do that at some point, but they don’t have to do it now. I think they can wait to see whether or not there needs to be a change.

Do you think we might miss deadlines this year?

It’s possible. I don’t think so. My own view is that the election is going to be decided decisively on Election Day, and all of these are hypotheticals.

So you think that on Election Night, we will know the answer?

I think many of us will know the answer. Whether everybody accepts the answer is a question. But I think the answer should be clear on Election Night.

Do you have concerns that the President won’t accept the results?

The President has said he would. He has the perfect right to bring it to court. But he will accept it, I believe.

How do you feel in general about an election, this year and possibly in the future, being so heavily contested via mail-in ballots?

So going forward, even after the pandemic is over, you’re in favor of elections having much more liberal rules regarding mail-in ballots.

I think most people should go and vote in person. But I think we should make it possible for the elderly and for the handicapped, and for others, to vote in a safe way. And I think we ought to have a lot of security to make sure it works well. Right now this is somewhat new, but I think in the future we’ll have better security.

You consider not giving wide access to mail-in ballots to be disenfranchising?

That’s right. A lot of people would not vote who should otherwise vote, particularly during a time of pandemic.

But you said that you’re interested in having wide access to mail-in ballots even when the pandemic is over.

I want to see how it works. But in general, I think the more voters we can get out, the better we are.