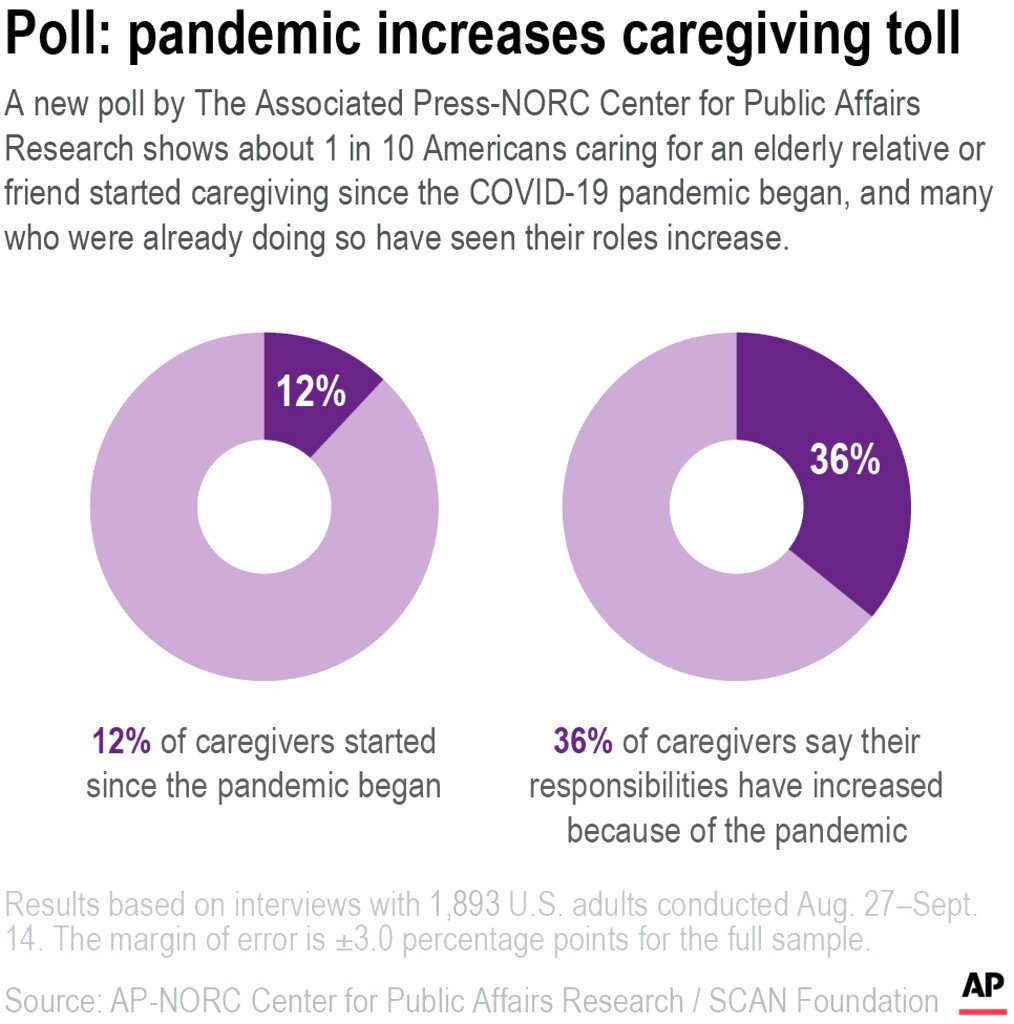 The coronavirus pandemic has thrust many Americans into the role of caring for an older or disabled loved one for the first time, a new poll finds.

And caregivers on the whole say they’re encountering unexpected risks and demands as a result of the virus, requiring greater time and effort. Still, they’re more worried about the relatives and friends they are helping than about themselves.

The Associated Press-NORC Center for Public Affairs Research poll finds that 17% of Americans say they are providing ongoing caregiving, part of an informal volunteer corps. About 1 in 10 caregivers has begun since the virus outbreak, and about half of those say they are providing care specifically because of the pandemic.

The poll finds that 1 in 20 caregivers has provided care to someone infected with COVID-19. When unpacked, that number reveals some social disparities. While 11% of nonwhite caregivers say they’ve cared for someone who got infected, just 2% of white caregivers have. Part of an ongoing series, the survey was funded by The SCAN Foundation, a nonprofit focused on quality-of-life issues for elders.

The fear of unwittingly passing on the virus has become a major preoccupation for caregivers. In the poll, 44% were extremely or very concerned about risks to the person they care for, versus 28% who said the same about their own risks.

The poll found that 28% of current caregivers had previously employed someone to provide in-home care but had canceled it as a result of the outbreak.

The poll found that caregivers, like others, are increasingly using telehealth as well as ordering supplies and food.

William Arnone, CEO of the nonprofit National Academy of Social Insurance, said the poll highlights both increasing stress on caregivers and the lack of a support system for those in the middle class.

“It’s an amazing set of pressures, both physical and emotional,” he said. “The pandemic has exacerbated it, but the aging of the population alone is going to be making things worse.”

One major alternative to in-home care is nursing homes, but their reputation has taken a blow. Nursing homes and long-term care facilities represent roughly 1% of the U.S. population, but they account for about 40% of COVID-19 deaths.

In the poll, 41% said they now have a less favorable opinion of nursing homes than before the virus. Just 10% have a more favorable view.