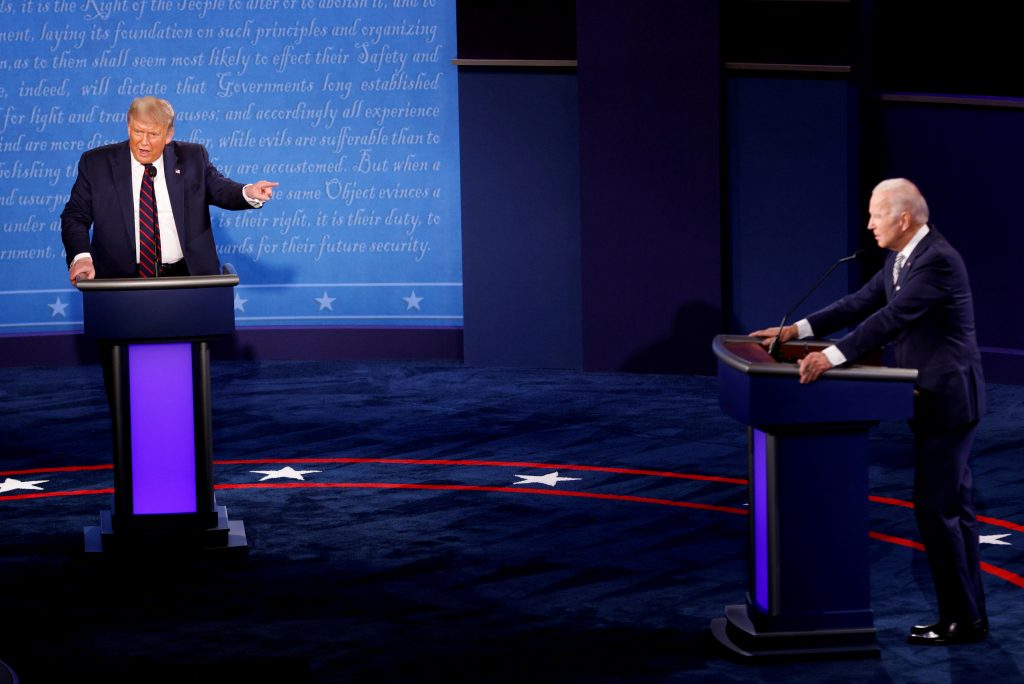 President Donald Trump and Democratic challenger Joe Biden will campaign on Wednesday in three states that will play a key role in the November election, the morning after a chaotic debate marked by interruptions and recriminations.

Trump deflected an opportunity to condemn white supremacists and again refused to say if he would accept the election results in Tuesday night’s first 2020 debate, two moments that could give Biden fresh ammunition.

The chaotic encounter also rattled investors by fueling fears of a contested election result that could lead to a messy transfer of power if Trump refuses to accept a loss, with U.S. stock futures down in pre-market trading.

The first of three matchups represented one of Trump’s few remaining chances to change the trajectory of a race that most national opinion polls show him losing, as the majority of Americans disapprove of the Republican president’s handling of both the coronavirus pandemic and protests over racial injustice.

Already more than 1.3 million voters in 15 states have cast early ballots ahead of the Nov. 3 Election Day, according to the Elections Project at the University of Florida.

Trump, 74, will spend the day in Minnesota – one of the few states his campaign is targeting that voted Democratic in 2016 – with a fundraiser in the afternoon before a rally in Duluth.

Biden, 77, will embark on an all-day train tour through a half-dozen cities in eastern Ohio and western Pennsylvania, including counties that Trump won four years ago on the strength of working-class white voters.

Pennsylvania, which narrowly voted for Trump in 2016, is seen by many strategists as the most crucial of the six most competitive states that will likely decide the election outcome, which also include Arizona, Florida, Michigan, North Carolina and Wisconsin. The latest Reuters/Ipsos poll of Pennsylvania gave Biden a slight advantage there.

Ohio, which Trump carried by 8 percentage points in his 2016 defeat of Democrat Hillary Clinton, is among the Republican-leaning states that Biden hopes to put into play in November.

Biden has held a modest but steady lead in national voter surveys for months amid the ongoing coronavirus pandemic, although polls in the battleground states show a closer contest.

The campaign has been roiled by major developments in the last few weeks, including the death of liberal Supreme Court Justice Ruth Bader Ginsburg and Trump’s nomination of conservative Judge Amy Coney Barrett to succeed her, as well as the New York Times report that Trump paid virtually no income taxes for most of the last two decades.

Biden has argued that Barrett’s confirmation would spell the end of the Affordable Care Act, costing tens of millions of Americans their health insurance – a point he emphasized during the debate.

The Trump administration is backing a lawsuit brought by Republican-controlled states to invalidate the ACA, also known as Obamacare, in a case the Supreme Court is scheduled to hear one week after the election.

Trump also declined to say he would accept the election results, repeating his unfounded assertion that widespread voting by mail would lead to massive fraud.