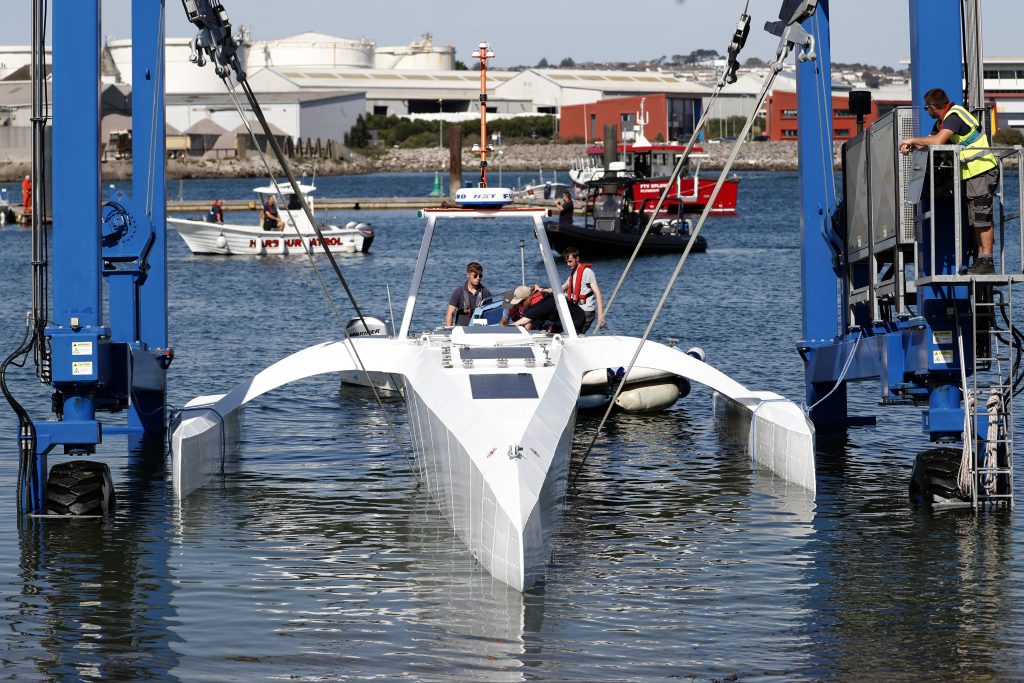 The Mayflower is taking to the water in Plymouth harbor.

It’s not the ship that left this southwest England port 400 years ago carrying Pilgrim settlers to America. The sleek vessel being readied Tuesday for its official launch has no passengers, no crew — but like its predecessor, an ambitious mission.

The 50-foot (15-meter) trimaran has “no one on board, no captain, no place to eat, no place to sleep,” said Brett Phaneuf, co-director of the Mayflower Autonomous Ship project. “It’s sophisticated artificial intelligence that will captain the ship across the ocean.”

The ship is set to follow in its forebear’s footsteps by crossing the Atlantic from Plymouth, England, to Plymouth, Massachusetts, this time on a marine research trip. Its creators hope it will be the first in a new generation of high-tech vessels that can explore ocean regions which have been too difficult or dangerous for people to go.

Built by the nonprofit marine research organization ProMare and computing giant IBM, the vessel will be launched and christened on Wednesday, 400 years to the day since the original Mayflower left Plymouth. The ceremony will be attended by officials from Britain, the U.S. — the 17th-century colonists’ origin and destination — and the Netherlands, where the Puritan pilgrims lived in exile before their voyage.

It’s part of 400th anniversary commemorations of the voyage involving the British, Americans, Dutch — and the Wampanoag people native to what is now New England. Wampanoag stories have been marginalized on past anniversaries, but this year play a central role in events and exhibitions on both sides of the Atlantic.

Now, as in 1620, not everything has gone to plan. The Pilgrim colonists set sail for America from Southampton, further along England’s south coast, but had to stop in Plymouth for repairs before finally setting out on Sept. 16, 1620.

The coronavirus pandemic delayed construction of the autonomous ship, and the vessel’s trans-Atlantic voyage has been postponed until 2021. It will undertake six months of sea trials and short trips before setting out across the Atlantic next spring.

People will be able to follow the ship’s voyages and research remotely. If successful, the 1 million pound ($1.3 million) ship will become the largest-ever autonomous vessel to cross the Atlantic.

Like the original Mayflower, it is powered by the elements — in this case a mix of sun and wind, with a backup diesel generator.

The vessel is packed with instruments to measure ocean health, including water sampling devices to monitor for micro-plastics and an acoustic payload to listen for whales and dolphins.

A range of technologies will help the boat sense the world around it, including cameras and radar to detect hazards. Computing and artificial intelligence systems supplied by IBM — and more commonly used by financial services firms — enable it to make decisions at sea with no human intervention.

“In a way, this ship actually has more to do with like a modern bank than it does with the old Mayflower,” said Don Scott, the project’s chief technology officer.

It’s hoped the vessel could herald a new era for automated research ships. There are plans to build two similar ships, one to work in the Arctic. Such vessels could be particularly useful amid the current global uncertainty, as the coronavirus pandemic cancels research trips and halts vital science field work.

Rosie Lickorish, an IBM software engineer and oceanographer, said the pandemic has had “a real negative effect on the scientific community.”

“So having autonomous ships where we don’t need to rely on people to be on board, that means that we can continue to do that vital research and collect that really important data,” she said.

Despite the pandemic-related setbacks, those involved in the project feel a huge sense of accomplishment — and anticipation.

Phaneuf sees a strong parallel between the two Mayflower voyages four centuries apart: “Neither of us are sure we were going to make it.”

“But our risk is much smaller than their risk — if we don’t make it, no one will be injured, no one will die,” he said. “But we’re going to learn a tremendous amount, no matter how far we get.”