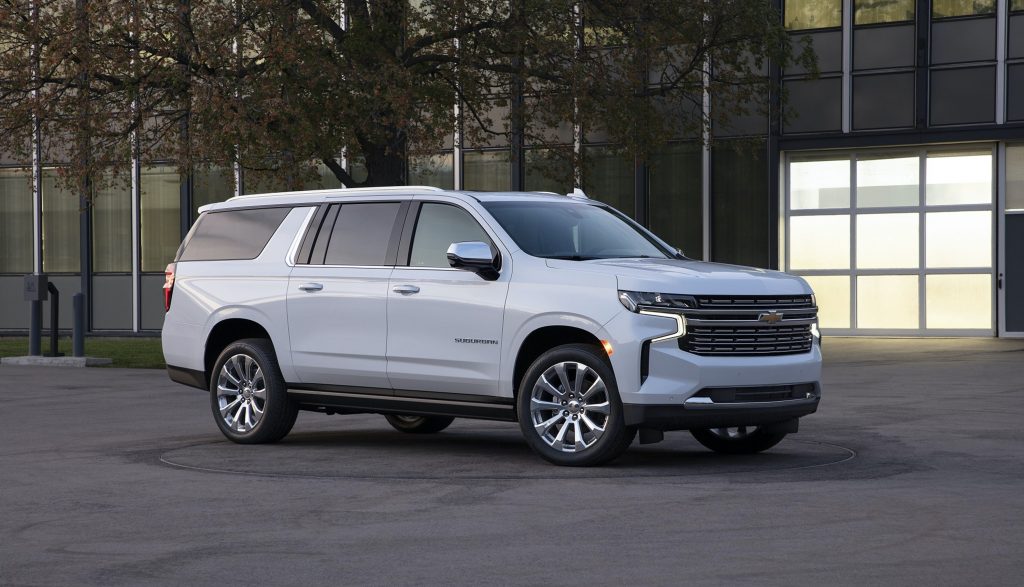 In the 19th century, huge elephants would kneel to pick up Indian maharajas. These royals would ride atop their steeds in gem-flecked carriages called howdahs, decorated with gemstones.

In 21st-century America we don’t have royalty. But we have howdah-carrying elephants. They’re called Chevy Suburbans.

I picked up Mrs. Payne for a night out this summer in Chevy’s all-new 2021 model. When we arrived at the restaurant, the elephant — er, Suburban — dropped 2 inches to allow for easier egress for my 5’5” wife.

Thank an all-new air suspension, part of a comprehensive remake of one of the bowtie brand’s most beloved vehicles.

The Suburban is the stretched version of the Tahoe, the Brobdingnagian mega-ute based on the same truck platform as the mega-selling Chevy Silverado. Sister brand GMC has its own version called the Yukon, while crosstown rival Ford puts its Expedition atop the Ford F-150 platform. Like the full-size pickup market, truck-based SUVs are dominated by Detroit automakers with Suburbans, Tahoes and Expeditions ruling the road like, well, elephants.

But for 2021, the Tahoe and Suburban have taken significant steps to separate themselves from their truck kin. Silverado and Suburban badges have always suggested a difference between ranch workhorse and family transport, but now it’s more than just a name, third-row seats and a hatch.

For the first time ever, Tahoe and Suburban get more upscale independent rear suspension and unique interiors. I’ve yet to drive the Tahoe, so I’ll focus on my Suburban Z71 tester.

I am already a fan of the new Silverado, the lightest truck in class thanks to a 400-pound diet over the last generation due to shrewd multi-metal chassis engineering. Suburban inherits this chassis, then adds car-like independent rear suspension, making it a joy to drive.

The second row of the 2021 Chevy Suburban gets a palatial view with the sunroof.

This thing is an ocean-liner, stretched another four inches over its predecessor. Second-row seats not only gain 10 inches of legroom, but the captain’s chairs slide, allowing for easy third-row seat access. The rug rats are waaay back in coach now.

Curled up in their seats, headphones on, playing their video games, they deserve a warning when dad decides to have fun in the twisties. Might I suggest an intercom system like an ocean liner?

Attention passengers: the captain is about to have a little fun.

An intercom system (I’m not kidding, actually — the Kia Telluride has one and it’s a lot shorter than the Suburban) is one of the few things missing from this technological tour de force. The other is adaptive cruise control, which GM has been notoriously reticent in offering in vehicles from the Chevy Traverse to the Corvette. ACC comes standard on my wife’s $21,395, all-wheel-drive Subaru Impreza hatchback, for goodness sake. And on one of my favorite SUVs, the $23,000 Mazda CX-30.

Flatten the seats, and the cargo area of the 2021 Chevy Suburban will swallow a small grocery store.

For a long-distance cruiser like the Suburban (starting at $57,795), adaptive cruise should be standard as well. Suburban doesn’t even offer it until the High Country trim, starting at the kingly sum of $77,890.

My recent $72,075 Corvette C8 ride didn’t have adaptive cruise, either. The good news is there are other Suburban features that favorably reminded me of King ‘Vette — and the Cadillac CT4-V.

The Suburban brings a modern electronic “trigger shifter” (a dash-mounted version similar to the Corvette). The tablet screen is mounted high on the dash — see Caddy and ’Vette — making for better visibility so I could keep my eyes on the road while accessing Chevy’s typical blizzard of tech offerings, from Sirius XM to Wi-Fi hot spot to nav system.

Forget the nav system, actually, as Suburban offers Apple CarPlay and Android Auto standard. My wife still swears by them as the best map guidance in autodom. “Go to Clarkson Union” I barked and Android Auto had it on our tablet screen in a jiffy.

Intimidated? The front end of the 2021 Chevy Suburban Z71 is blacked out with fearsome grille and skid plate underneath for off-road exploration.

Stomp the gas pedal and V-8 Corvette tunes fill the cabin. My eight-holer was of the smaller, 5.3-liter variety. Those wanting the Full-Monty, 6.2-liter V-8 ‘Vette experience will have to jump (as with adaptive cruise) a rung to the High Country model.

There are a lot of rungs. Six in all as the Suburban lineup looks a bit like the endless, eight-trim Silverado — something for everyone. I like my Z71, thank you very much.

The Z71 gives the big bus a rugged, off-road swagger with blacked-out grille and nameplates complimenting its chiseled flanks and LED running lights. Royal elephants would kill for this kind of bling.

Such work is usually the domain of pickups, but they cease to be passenger friendly aft of their crew cab. Stretching almost 19 feet from stem to stern, the Suburban is just shy of the 19.2-foot long Silverado with 5.8-foot bed — which means 41.5 cubic feet of storage in back for a Conestoga wagon with 550 miles of range.

Inside are options galore — befitting a Chevy that can easily price out in the neighborhood of a Mercedes GLE SUV. My favorite features include the second-row captain’s chairs, which, like minivan seats, can flatten into an ottoman. I liked sitting in the third row, propping up my size 15 feet on the second-row stool and getting laptop work done while on the road.

And the center console island? It moves. Push an overhead button and the whole console slides backward, revealing a hidden drawer underneath — good for stowing valuables or just everyday items like charging cords for the two USB jacks in the back seat.

It’s one fancy carriage. Maybe they should have called it the Chevy Howdah.

All-new for 2021, the Chevy Suburban is the longer version of its twin, the three-row Tahoe. Built on the Silverado truck chassis, the family Suburban has a more refined interior and ride than the pickup.