Mordechai (Suli) Eliav, Director of the Western Wall Heritage Foundation, greeted them and explained how the Kosel has been functioning during the coronavirus Pandemic, and how it serves as a model for maintaining the routine of prayer and visits while abiding by directives.

Rabbi Shmuel Rabinowitz, the official Rav of the Western Wall, sent a special letter with Mr. Kushner to Sheikh Mohamed bin Zayed Al Nahyan with blessings from Yerushalayim for the establishment of diplomatic relations between the State of Israel and the United Arab Emirates.

The delegation was treated by Mr. Eliav to a fascinating display of findings discovered in archaeological excavations in the Western Wall Tunnels. He also joined them in tefillah, prior to the historic flight, for the success of peace with the UAE, for the health of those stricken by the coronavirus in Israel, the United States, and around the world. With the approach of Rosh Hashanah, they davened for a year of health and blessings for all. 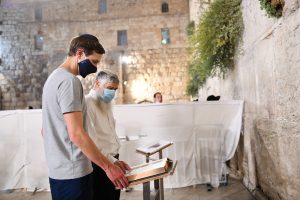 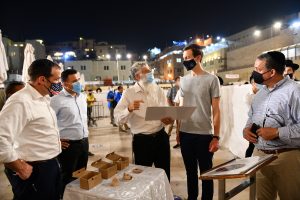