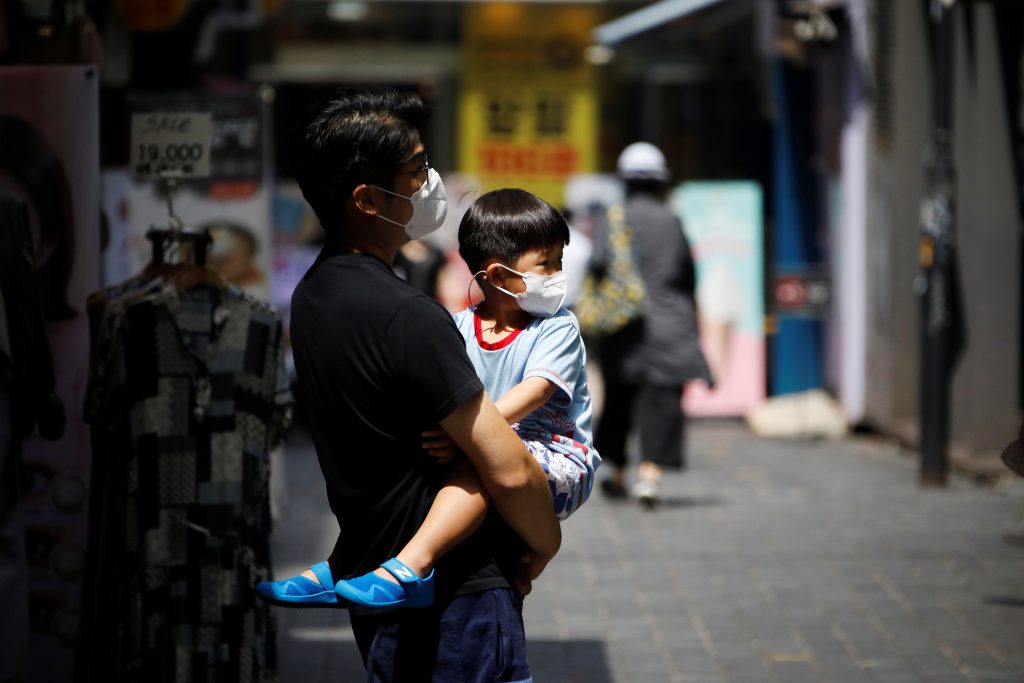 South Korea’s capital on Monday ordered masks to be worn in both indoor and outdoor public places for the first time, as it battles a surge in coronavirus cases centred in the densely populated metropolitan area.

In May, the city government ordered that masks be worn on public transport and in taxis, but a recent spike in cases has health officials worried that the country may need to impose its highest level of social distancing, known as phase 3.

“If we can’t stop it at this stage, we have no choice but to upgrade to the third phase of social distancing,” President Moon Jae-in told his top aides.

“The raise to phase 3 is by no means an easy option.”

Under phase 3, schools and business will be urged to close inflicting more damage on Asia’s fourth-largest economy.

The Korea Centres for Disease Control and Prevention (KCDC) reported 266 new cases as of midnight on Sunday, down from 397 a day earlier but another in more than a week of triple-digit daily increases.

It has been widely praised for its success in tackling the virus, with extensive testing and aggressive contact-tracing, but health ministry official Yoon Tae-ho said investigators had been unable to determine the transmission routes of about 20% of recent cases, raising concern about so-called silent spreaders.

He called on people to avoid leaving home and to cancel any unnecessary trips out.

“If we fail to flatten the curve this week we believe we will be faced with a very important crisis, that the virus will spread to the entire nation,” Yoon told a briefing.

Authorities have linked 875 recent cases to a Seoul church run by a radical preacher.

Some members of the church attended a recent anti-government rally passing the virus on. A total of 176 infections, including seven police, have been traced to the rally, KCDC chief Jeong Eun-kyeong told a briefing.

The government has accused the church of obstruction by not providing complete lists of members and spreading fake news that is hindering the anti-virus effort. Church members say they are victims of a politically motivated witch-hunt.

Coupang Corp, one of South Korea’s biggest e-commerce firms, said it had shut down its headquarters in Seoul after an employee working from home tested positive.

In June, at least 100 cases were linked to a logistics center run by the e-commerce giant.

The government has extended second-tier social-distancing rules to the whole country after new cases appeared in all of its 17 regions.

Under the restrictions church meetings are banned and nightclubs, buffets and cyber cafes are closed.

South Korea has recorded an average of 162.1 daily infections over the past two weeks – 13 times the average of two weeks ago. Of the new cases, 84% were in the Seoul metropolitan area, the KCDC said.