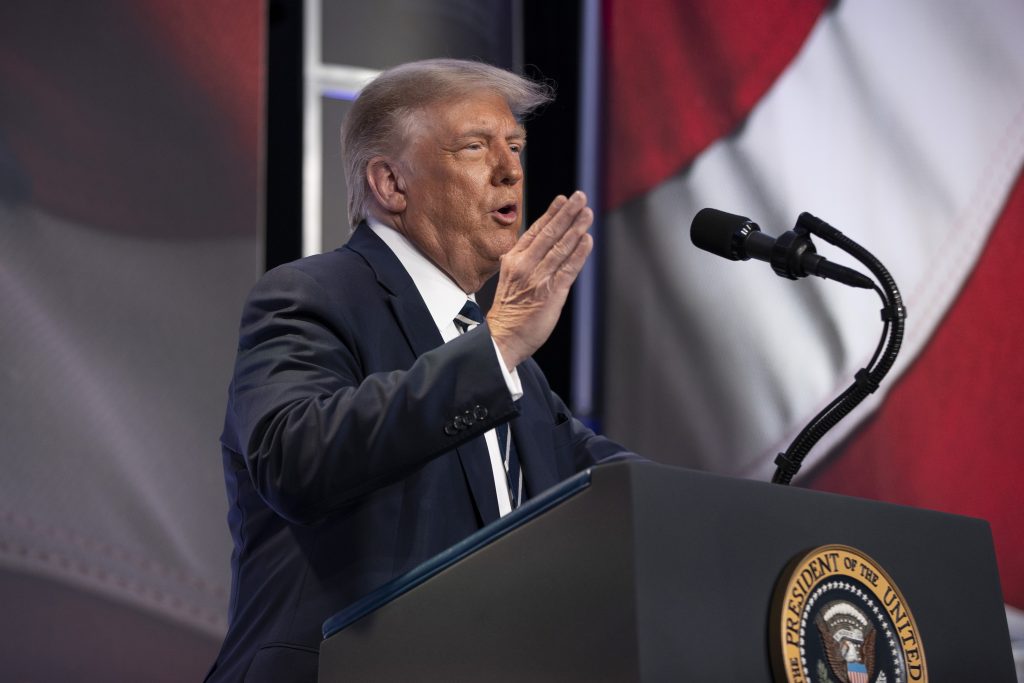 As Donald Trump gears up for this week’s Republican convention, one thing is clear: recorded speeches, empty halls and parking-lot fireworks won’t cut it.

“I think it’s pretty boring when you do tapes,” Trump said of his convention speech during an interview with Fox News host Sean Hannity. “I’m going to go live.”

Trump is looking to outdo the Democrats’ mostly virtual convention with live speeches and at least a small group of supporters to energize speakers. He’s also teasing the promise of a few surprises.

In his Aug. 27 speech accepting re-nomination for the presidency, Trump said he’ll claim credit for his administration’s overlooked successes, in hopes of turning around voter opinion.

Trump will deliver his acceptance speech on the White House grounds, after Vice President Mike Pence warms up supporters with a speech the night before from historic Fort McHenry in Baltimore, the site of a War of 1812 battle that inspired Francis Scott Key to write “The Star Spangled Banner.” The convention’s theme is “Honoring the Great American Story,” according to a person familiar with the planning.

Trump spent last week traveling to swing states — including Minnesota, Wisconsin, Arizona and Pennsylvania — addressing gatherings of hundreds of people at the stops. Officials have considered putting the president and other speakers in front of similar limited crowds during the convention.

There will be a mix of live and pre-taped appearances from Washington and around the country, and planners are seeking to keep a more traditional format, believing it will be more compelling than the Democrats’ presentation. The Republicans are planning moments designed to shock viewers, anger opponents and air the president’s grievances against Democrats and the media.

White House counselor Kellyanne Conway called the Democratic convention a “Hollywood produced” and “dour and sour” event, and said the Republican convention by contrast will feature “people whose lives have been impacted and measurably and consequently changed due to the efforts and policies of President Trump.”

Speakers include Nick Sandmann, a Kentucky boy who sued media outlets for libel over coverage of his role in a confrontation with a Native American man in 2019, when he was a high school student; and Mark and Patricia McCloskey, a St. Louis couple facing criminal charges after brandishing guns as Black Lives Matter protesters marched through their gated community. People who formerly lived under socialist governments in Cuba and Venezuela are also invited to speak, according to a person familiar with planning.

The event will also brim with possible contenders for the 2024 Republican ticket who are looking to set the stage for their rise. That group includes former U.S. Ambassador to the U.N. Nikki Haley, U.S. Senators Tim Scott, Joni Ernst and Tom Cotton, and South Dakota Governor Kristi Noem.

But officials say Trump is unlikely to cede the spotlight for long. He plans to appear each night of the four-day affair, including one event where he will honor front-line workers responding to the pandemic.