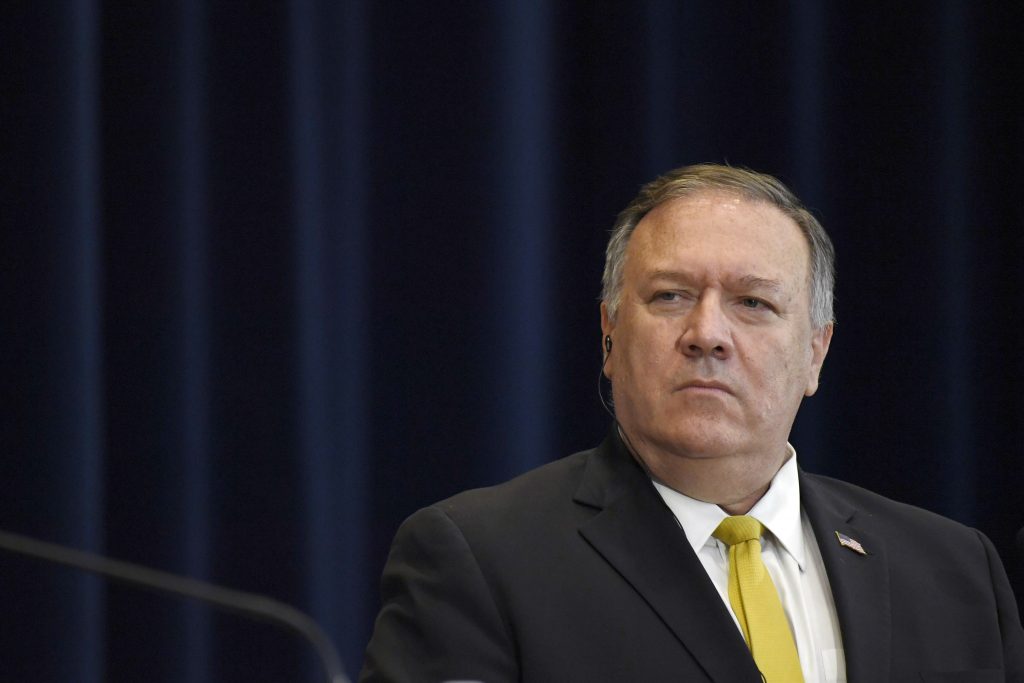 The Trump administration on Thursday formally notified the United Nations of its demand for all U.N. sanctions on Iran to be restored, citing significant Iranian violations of the 2015 nuclear deal.

Secretary of State Mike Pompeo delivered the notification to the president of the U.N. Security Council, setting the stage for a showdown in the world body that could lead to a crisis of credibility for its most important and powerful institution. Even before Pompeo presented the council president with the notice, other members rejected the step.

None of the other council members believe the U.S. has the legal right to demand the reimposition or “snapback” of sanctions because President Donald Trump withdrew from the nuclear deal in 2018. As such, the demand is expected to further isolate the U.S. at the U.N. and test the Security Council’s credibility.

In a letter presented to Indonesia’s ambassador to the U.N., Dian Triansyah Djani, whose country currently holds the rotating presidency of the council, Pompeo said the U.S. was notifying the body of “significant non-performance” by Iran related to the nuclear deal. As a result, Pompeo said the process leading to the reimposition of U.N. sanctions had been initiated.

The U.N.’s nuclear watchdog, the International Atomic Energy Agency, has reported some Iranian violations of the agreement, but Tehran says those are the result of the U.S. violating the accord by withdrawing from it and then reimposing harsh unilateral sanctions.

Pompeo noted that the European participants in the deal had attempted to bring Iran back into compliance. But he said, “Despite extensive efforts and exhaustive diplomacy on the part of those member states, Iran’s significant non-performance persists.

“As a result, the United States is left with no choice but to notify the council that Iran is in significant non-performance of its JCPOA commitments,” Pompeo wrote, using the acronym for the deal’s formal name, the Joint Comprehensive Plan of Action.

Pompeo’s letter was accompanied by a six-page explanation of why the U.S. believes it retains the right to invoke snapback, a mechanism afforded to participants in the nuclear accord by the Security Council resolution that enshrined the deal.

The U.S. maintains that its withdrawal from the nuclear deal does not obviate its right as an original participant and a permanent Security Council member to demand the restoration of sanctions.

That argument, however, has already been rejected by the other members of the council, including U.S. allies Britain and France, along with China and Russia.

“We do not take it that they have the legal right or the reason to initiate this thing,” the Russian ambassador, Vassily Nebenzia, said Thursday before Pompeo’s notification. “So, of course, we will challenge it.”

China has said it agrees with the Russian position, and Iranian Foreign Minister Mohammad Javad Zarif told U.N. chief António Guterres in a Thursday phone call that the Security Council must resist the U.S. demand.

“This would have dangerous consequences for international law, it will bring nothing but the destruction of international mechanisms and it will discredit the Security Council,” Zarif said.

Under the terms of the Security Council resolution that enshrined the nuclear deal, Thursday’s notification starts a 30-day clock after which pre-2015 U.N. sanctions on Iran that were eased will be reimposed unless a resolution specifically extending their suspension is passed. The U.S., however, would use its veto power to block any resolution extending the sanctions relief.

Because of the legal debate over U.S. standing, it is possible that the snapback demand will simply be ignored by the other members, which could call into question the Security Council’s relevance and ability to enforce its own legally binding decisions.

Trump and Pompeo had made no secret of their intention to pursue snapback, particularly after the administration’s defeat last week at the Security Council on extending the arms embargo on Iran that expires in October. The U.S. won just one other “yes” vote, with China and Russia opposed and the 11 other members abstaining.

As with the arms embargo, Russia and China bitterly oppose reimposing other U.N. sanctions on Iran. So do U.S. allies Britain and France, which are hoping to preserve the nuclear deal in the event President Trump loses his bid for a second term in November’s presidential election. Democrat Joe Biden has said he would try to revive the agreement.

The Europeans fear that the reimposition of sanctions may lead Iran to quit the deal entirely and plow ahead with efforts to develop atomic weapons. The Trump administration says it withdrew precisely because it eased sanctions, opening major revenue streams for Iran while gradually easing restrictions on its nuclear activities that money could pay for.