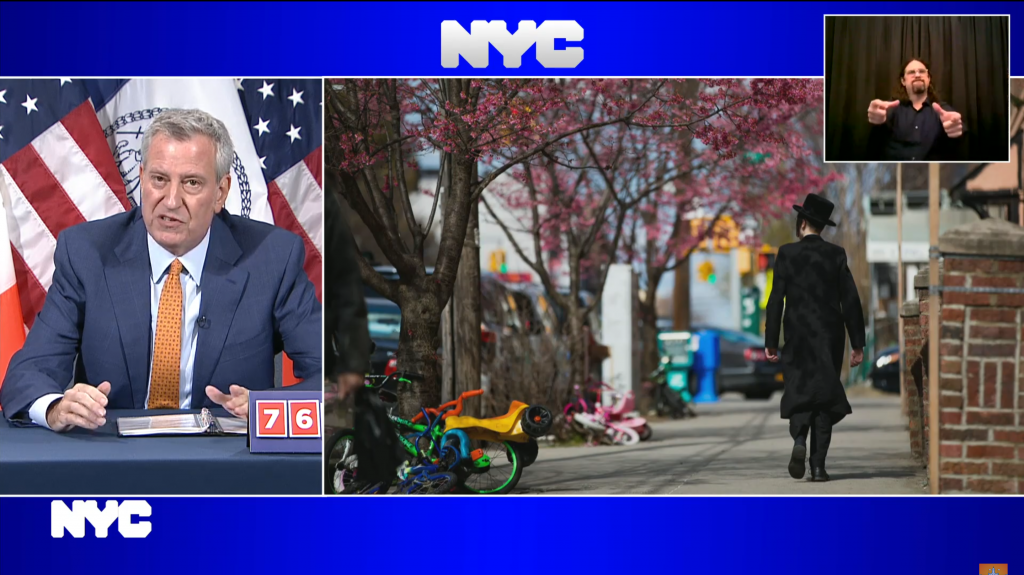 Boro Park has seen a small uptick in COVID-19 cases, partly related to a recent wedding in the neighborhood, and officials are warning against assumptions that any community has achieved herd immunity.

At his daily coronavirus press briefing Wednesday morning, Mayor Bill de Blasio said there have been 16 new cases recently reported in Boro Park, some of which are linked to a “large wedding.” The city’s Test & Trace Corps will be searching for individuals who attended the wedding, to ensure they and those they were in contact with are tested.

The mayor said that these cases were “an early warning sign,” and a reminder that attending large gatherings can still be dangerous.

Social gatherings are legally limited to 50 people or 50% of maximum occupancy, whichever is smaller. De Blasio said inspectors will be ensuring that catering halls adhere to the guidelines.

The mayor also said he had a call Tuesday night with Boro Park community leaders, who “certainly understand the urgency of situation,” and that community organizations will be working with city health officials to ensure that those who have tested positive have the resources they need, and a place to go if they have to to isolate themselves from their families.

Overall, both the city and state continue to show sharp improvement in fighting the coronavirus, though exact figures provided by the state can sometimes differ from those provided by the city. Gov. Andrew Cuomo announced Wednesday that for the twelfth consecutive day, fewer than 1% of the COVID-19 tests in the state were positive. In New York City, the share of positive tests on Tuesday was 0.8 percent according to the state’s figures; whereas the city said that the number was just 0.24 percent, which, de Blasio said, represents “the lowest infection rate in New York City since the beginning of the coronavirus crisis.”

During the past four weeks, there have been 54 reported COVID-19 cases in Boro Park’s main zip code of 11219, for a rate of 58.15 per 100,000 people. Neither the number of cases nor the rate is high compared with other zip codes in the city – far lower, for example, than nearby Sunset Park, which has recently seen a sharp increase – but officials are concerned about the 16 recent cases, particularly as some are tied to the wedding that flouted regulations on gathering limits.

On a conference call Wednesday afternoon with Orthodox Jewish media outlets, the city’s new health commissioner, Dr. Dave Chokshi, said he is “concerned about the reports that we’re hearing about our public health guidance not being followed.”

“The fact that these large events are happening,” said the commissioner, “is problematic, in and of itself.”

The Boro Park Jewish community was hit hard early on by the coronavirus, but the disease then seemed to have nearly disappeared. A source in Boro Park Hatzolah told Hamodia on Wednesday that the organization has received virtually no COVID-related calls during the past four months, and a source in Maimonides Medical Center told Hamodia last week that there were a total of six patients with COVID in that hospital.

But on Wednesday’s conference call, the health commissioner expressed concern that people may have become less vigilant due to erroneous beliefs about immunity.

“There are people who believe that they were infected, and therefore cannot be reinfected. But those views are not yet supported by science.”

Asked by a reporter about herd immunity, de Blasio said, “I don’t think we have any evidence of herd immunity anywhere in New York City … we’re nowhere near that point from what we know.”

Dr. Jay Varma, de Blasio’s senior adviser for public health, said at the mayor’s press conference, “It may very well be that there is some percentage of the population that is currently immune that’s also helping keep our infection rates low, but I don’t think we should be complacent and rest upon that until we know more.”

Officials are urging the public to maintain vigilance by wearing masks, social distancing, washing hands, avoiding large gatherings, getting tested for the virus, and communicating and cooperating with Test & Trace officials about possible exposures.